For the majority of us, running 5k at a parkrun is the best way to spend a Saturday. But not so for club members Alan Wallace and Colin Dilks. Instead they get their kicks from running up and down mountains. I’ll let Alan take over the story.

Last year I ran the Kielder Blast which was part of the English Fell Running Championships. The top fell runners were there and the standard was high. I did a little research and decided that I would like to run in this year’s championships.

So there are 6 races and you need to complete a short, a medium and a long race. You are awarded points if you finish well up in the race. I don’t expect to get any more than 1 point per race.

The Fairfield Horseshoe is a medium length race at just over 10 miles with 3000ft of climbing to be done.

I picked up Colin Dilks and David Johnson (Ns Poly/NFR) and we headed across to the Lake District with some great banter to make the journey fly over including my “Ive stood naked on the top of Helvellyn in a snow storm” story.

After a short wait to get into the car parking field we made the long trudge to the compulsory kit check. As it was chucking it down they were very strict about kit and I had to borrow Davids jacket as my pertex one wasn’t good enough for them. I did have my ten-ton Gortex one in the boot though.

So, we were registered, got ourselves changed and walked back along to the starting area only to be told by the passing fell running legend Wendy Dodds that the race was delayed for half an hour.

All the top runners were there as the field gathered and all of a sudden we were off! We all piled forward straight onto a small road, creating a bit of a bottleneck. This didn’t last though and there was room enough to move forwards. The road undulated for a short distance and then turned uphill. 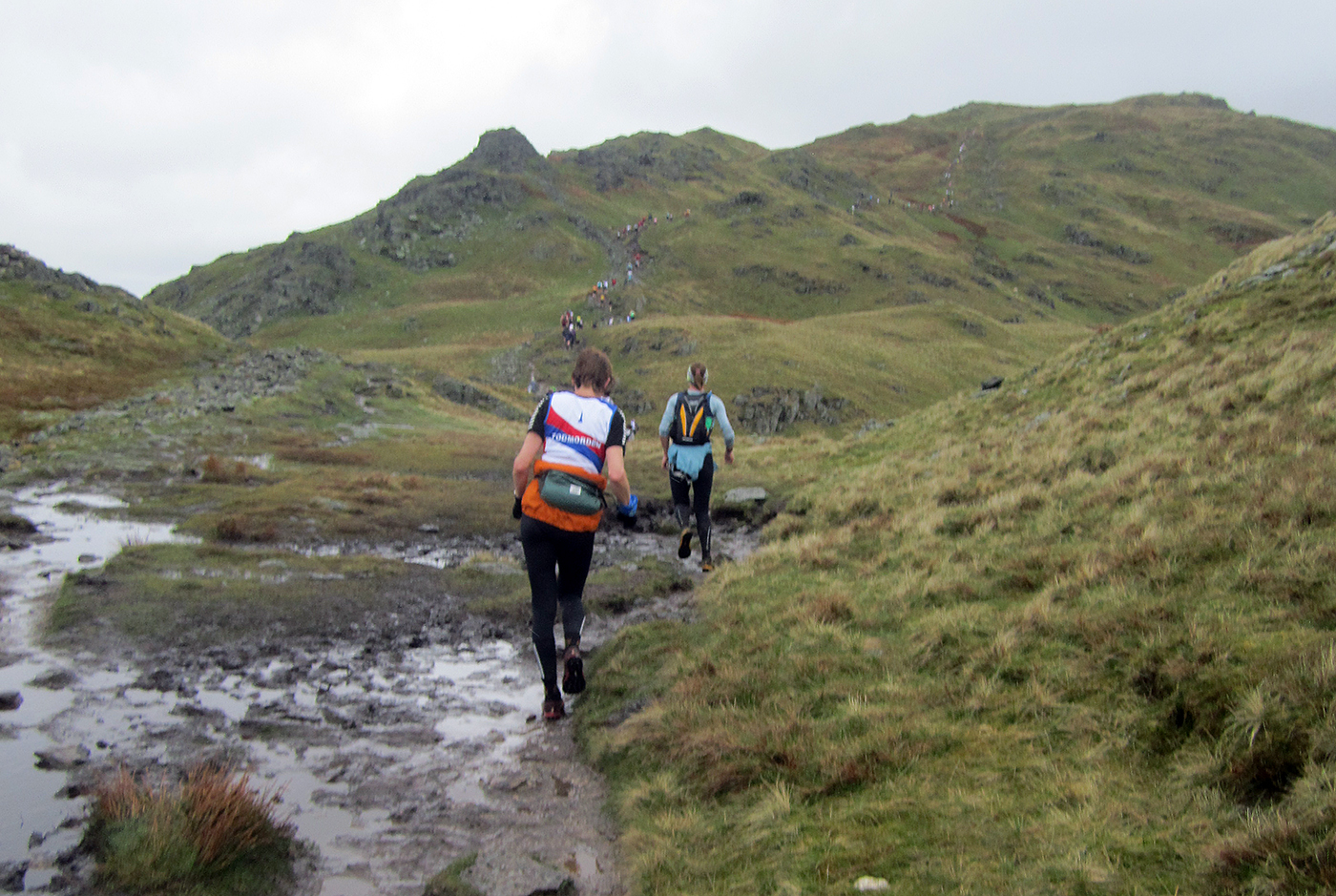 I was feeling pretty strong and pressed forwards through the field up the hill. The tarmac had disappeared and we were following a track. I’d been warned about a river of Cow gunge early in the race but before I knew it I was up to my knees in it. That was me stinking for the rest of the race.

Once we were out onto the open fell you could see a long line of runners snaking up the side of Nab Scar to reach the ridge. The going was tough and the wet grass made the steep climb harder. 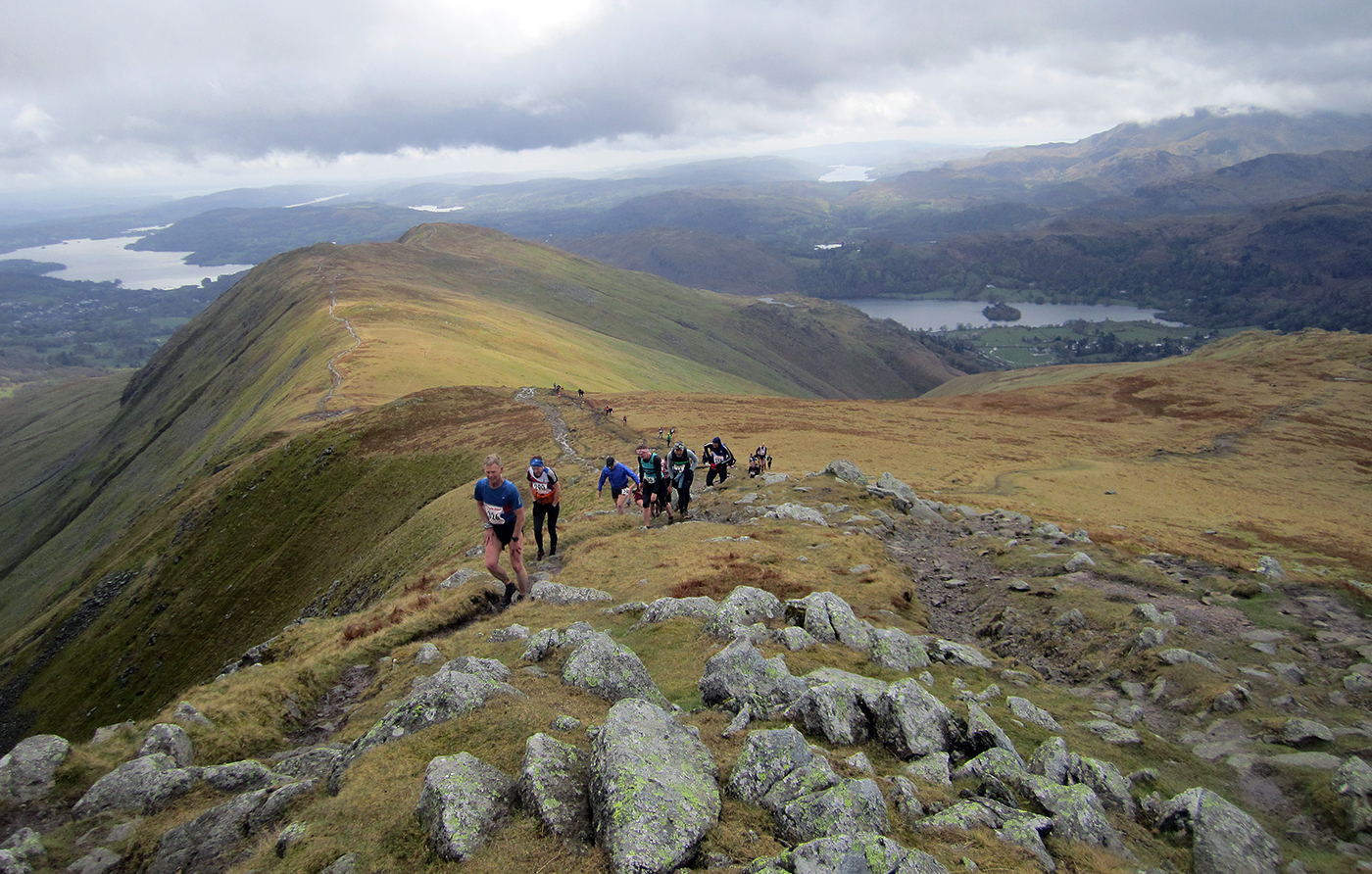 Once onto the ridge the climbs kept coming. We went off to the left and contoured around the side of Heron Pike at 2008ft. The freezing wind was blasting us against the side of the fell. David stopped to pop on his jacket and I slipped past. We started climbing again and headed up Great Rigg at 2513ft. Dave slipped past me on the climb and I was left playing catch up for a while.

There was a nice rocky top to Great Rigg and I turned around and drank in the views back across our route of ascent. Wow! What a place to be running. Yeah, I was wet, Yeah, it had taken me an hour to run 4 miles, but the fact is I love it. 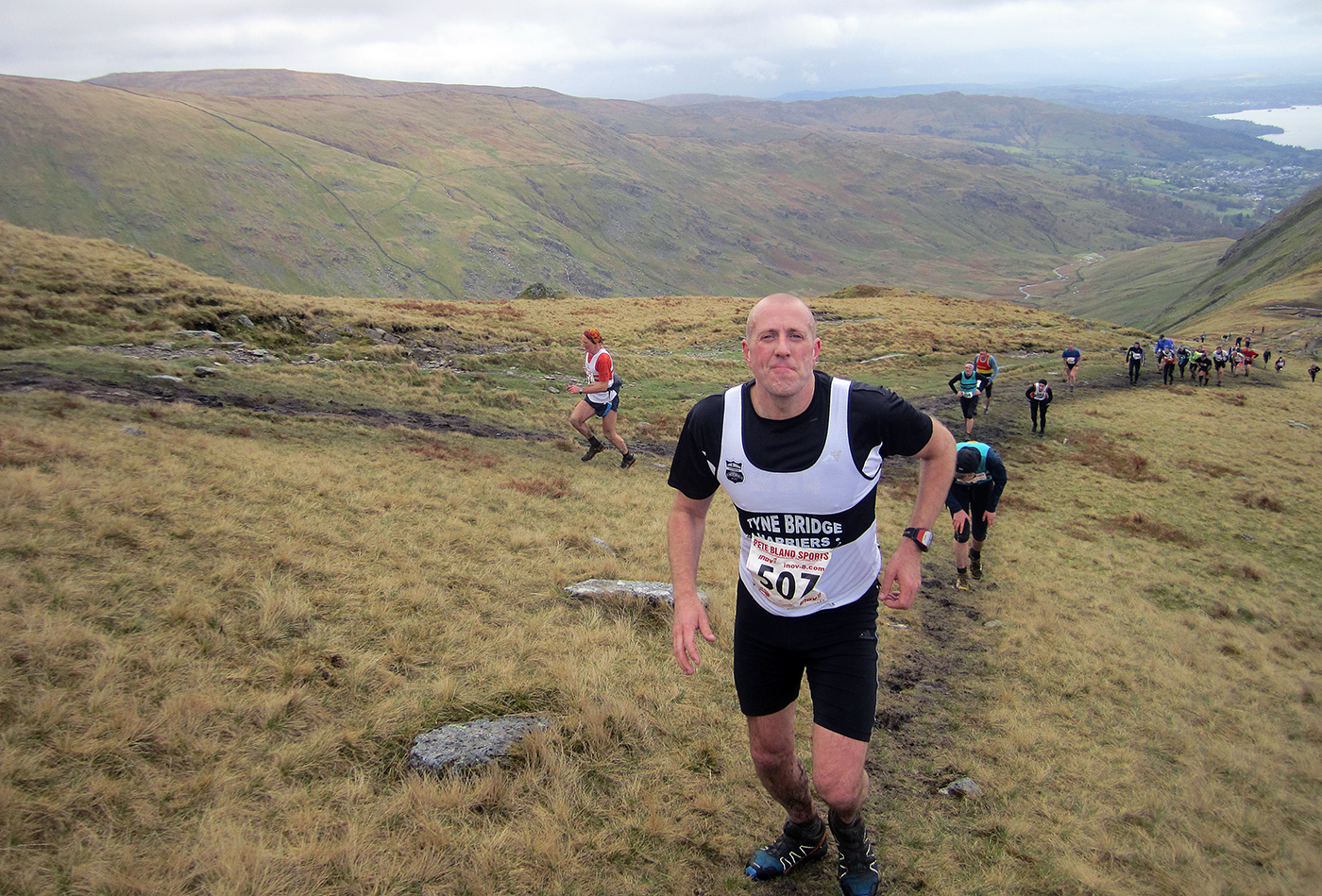 Feeling on top of the world.

I love fell running. The hills, the mountains, the woods, the bogs, the rivers, the punishing climbs, the flying descents. I love them all. Watching people glide by you on the climbs and then catching them on the descents. The great atmosphere, everyone accepting the hard slog ahead and knowing they are about to do for fun what most people would think crazy.

Off I went down Great Rigg towards the highest point in the race, Fairfield at 2864ft. It was a steady slog up into the clouds as I tried to hold onto my position, knowing that once the long descent started I would pick up a good few places.

We made the summit and quickly turned towards the east and headed down the fell side. The going was good and I started to reel people in. This lasted about 2 minutes though and the terrain changed to rocks, arresting my flying descent.

We picked our way down through the rocks and then headed upwards again towards Hart Crag at 2697ft. Climbing again. I could see David ahead but he was out of reach and I just resolved to work as hard as I could on the next 2 climbs in the hope of getting within striking distance on the descent.

Up we went through the rocks, over the top and then down over the slimy broken rocks. There was a small section of grass and then we made the climb up to Dove crag at 2598ft. More hard work on the climb and once at the top the terrain changed back to grass. I took my chance and flew down past a few people. I skipped past David and went for it. 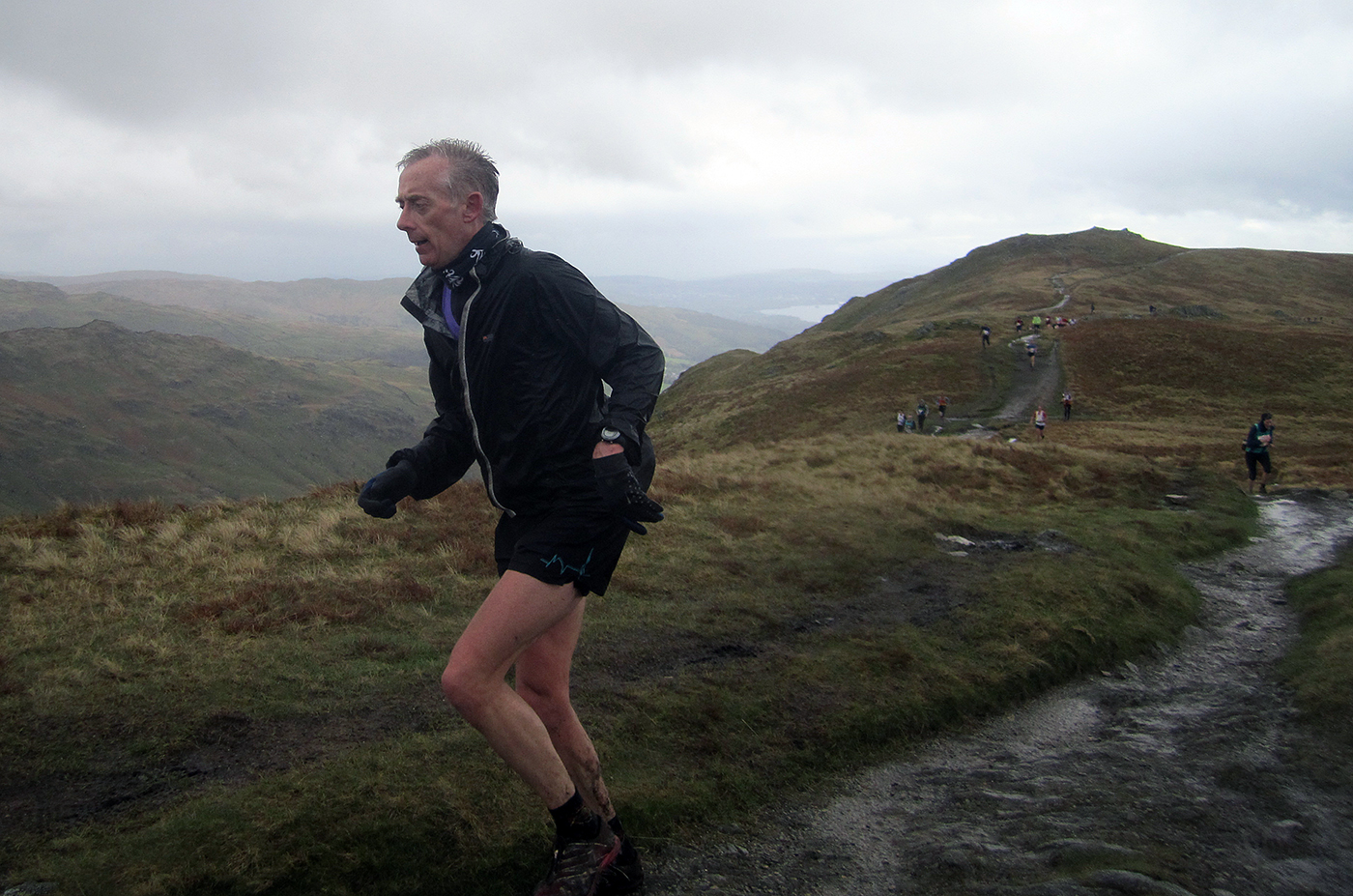 Then disaster! I slipped on the wet grass. I was straight up and running again, but it happened again, then again, and again, and again….. My fell shoes just didn’t have the grip. Im usually confident on my descent but my bottle was gone now as the terrain changed again to a rocky boggy trail.

David came alongside in his Mudclaws and from then on we were exchanging places for the rest of the race along with a couple of ladies. Down over High Pike at 2152ft and then over Low pike at 1667ft we were losing height rapidly.

We got down to the valley floor and made the track alongside the car park. Now it was just a simple task of running half a mile along a flat(ish) track. Easy eh? Hey, I’m a road runner me. I’ll just open up those legs and fly along there.

Wrong! I had nothing. I mean nothing. I stopped. A runner passed me. Another runner came past, it was David. If it wasn’t for him I probably would have walked to the finish. I managed a trot until a small downhill section where I pushed it. Then there was a small brook to cross, over the bridge and a final burst uphill for the finish, holding off David by the skin of my teeth.

It wasn’t long before Colin came in and handshakes were exchanged as we shared our experiences of the race. We all finished just over the 2hr mark. 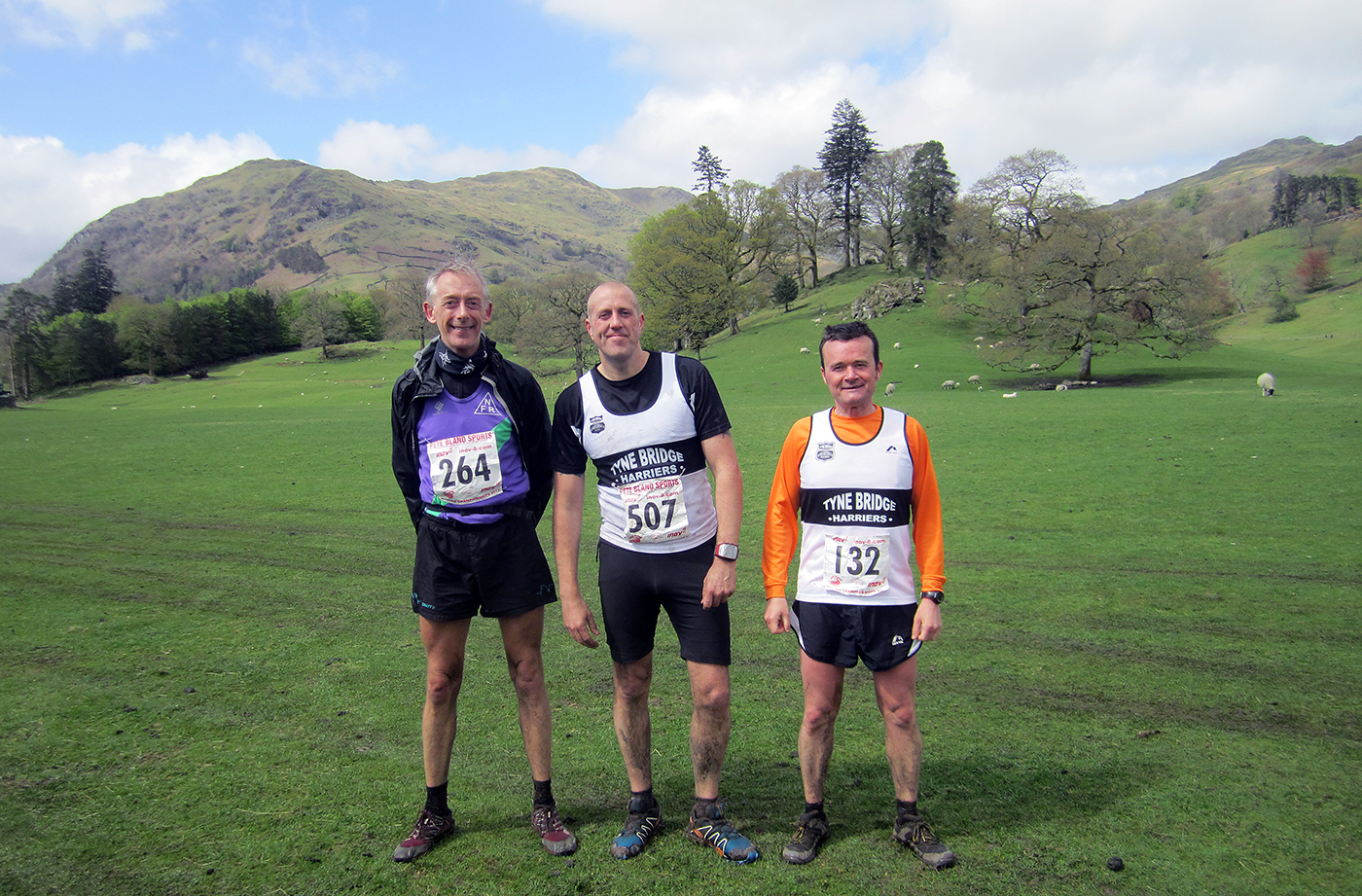 The sun finally appeared after we had finished and we dropped David off in Ambleside and left the lakes caked in mud in glorious sunshine.

What a race! It was tough. It was long and arduous. The scenery was fantastic. The standard was high this year with it being part of the championships. It was well organised and very well marshalled. It would be a great introduction to longer, high-level fell running with some good height, easy navigation and some nice technical sections on the descent.

All in all, a great day out with great company.

I’ll certainly return for next year.

Permanent link to this article: https://www.tynebridgeharriers.com/2013/05/12/fairfield-horseshoe-fell-race-11-may-2013/