On a very icy and cold Sunday morning, the TBH contingent met at the local school car park which was now a makeshift race HQ and registration building, located in the small remote village of Allendale. Registration was slick and easy with a lot of cake floating about the place. I chose to avoid this as I have to maintain the snake hips.

During the registration, the staff pointed out the Fell Runners Association safety conditions would apply to the event, meaning all had to carry the correct kit and equipment. TBH met these conditions and in some cases we may have carried a little bit more kit then required, but rules are rules, and I for one totally agree with the set up.

A quick look at the first hill section saw it recently prepared with grit and ready for the masses to attack it at full pelt, or at least that was my plan. The hill at the start I was informed was “steep”, my opinion is that it’s more like “sheer vertical”… (oh ok, maybe I was a bit over the top, to which I was also caught out with my description from the weeks previous course recce, “the river is chest deep honest” think I got a bit excited with that report also). 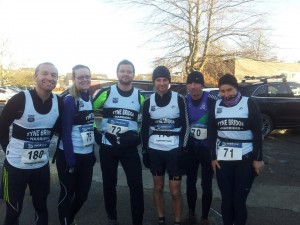 The start saw a mix of local clubs and fell running clubs lining up for the race. I did my usual checking out of competitors by my tried a tested of method: check the shoes and legs. Odd, I know, but it hasn’t failed me yet, but on this day it did.  I spotted a few odd looking shoes, and guys with weird legs, and thought maybe I can secretly chalk up a win here, bouncing on the spot and excited like a child, I was ready to go.

Handshakes all round, and after a very intense brief by the race organiser Brendan, who’s no messing attitude, was another reason why I started thinking “Fell Running is for me”, the gun went and we were off.

As usual I shot off and found myself in the lead. Once we hit the road it was downhill,  very easy running, which enabled me to open up a lead. I could hear the breathing of other runners becoming more and more distant. I hit this sheer vertical hill, honest, and went for it. It was then I found that Fell Running is a different style of running altogether, I started to feel the lungs burn, the legs go like jelly, and then two runners appeared, who I now know to be Andy Blacklett (winner) and Philip Sanderson (2nd place). Both slotted in beside me, and settled into a rhythm, I then did my other usual tactic of refusing to look behind or to my side. This is mental process I go through–I fear if I look behind I am somehow agreeing to not winning, please tell me someone else does this as I feel I’m maybe putting a slightly weird view of myself out here…

Our trio then broke this tactic as both runners started to speak to me, asking my name and who I was. The reply I got was “never heard of you, but you’re doing well”! We hit the fells at speed with Andy falling twice, another lesson learned: don’t stop and ask him if he is ok, as you get a sharp response of “keep running”.

It was here I started to see why fell running is totally different style and skill: small tracks, mud, ice, heather, all frustrate and don’t allow you settle into any rhythm or speed, its constant jumping, sliding or slipping. Both Blacklett and Sanderson pulled away. Another runner then went by, and I noticed he did not have the kit as per the FRA rules; I was slightly angered by this, but didn’t let it affect me, and just focused on catching him.

The rolling fells were challenging with many rocky paths and downhills, all of which proved hard on the knees and thighs. I know from the post-race chat with fellow TBHers that many fell and went down hard. The race went by with the lead three pulling away, and my tactic of refusing to look behind then worked against me. I was in a trance, and Louis Goffe pulled up behind me. “Hi Dave.” I jumped and thought oh Louis is fast and may pip me for fourth. I felt the need to chat a bit, then decided to put some more effort in, and see what happens, I gathered momentum and pulled away, all downhill now to the finish.

It was here I could then see third place, and thought I could maybe catch him. He was plodding and now we were on the roads maybe I could have him. I wound it up and felt strong, feeling myself going fast and faster, but then all too quick the finish line came into sight. Ah why didn’t I kick earlier?! The familiar feelings of frustration that I’m sure all runners have, “I should of, or could have”, started to come into my mind again, but the benefit of this is it gives me the will to do the next one, searching for that perfect race and performance. Bring on the Simonside Cairns Race.

I crossed the line in fourth place, and was greeted by a commotion. Two runners were arguing and discussing the issue of not carrying the kit. Later I was sad to hear the guy without the kit was disqualified and I was now into 3rd place, not the way I wanted it, but rules are rules.

I would like to make a special mention of David Young and Naomi Virgo, who both received injuries. David took two falls and on the second it has been reported he has possibly either broken or damaged his ribs, and Naomi who also fell, but five times, which saw her return muddy and covered in blood, injuring her leg and knee.

Both athletes still carried on and finished the race, showing great determination and a never-give-in attitude. This, with the conditions and the remote feeling of running in the fells, shows the inner strength both athletes have. It was very inspiring when I saw both of them at the finish. They deserve the title of performance of the weekend.

A huge thank you to Louis for making us all aware of the event, it was a great day out with plenty of cake. Here’s to the next one.

Permanent link to this article: https://www.tynebridgeharriers.com/2012/12/03/hexhamshire-hobble-race-report-sunday-2nd-dec/