“If we can know ourselves better, we can explore our abilities, and achieve all manner of things we may previously have thought impossible.” Karen Darke

The Kendal Mountain Festival is an internationally renowned event where several thousand climbers, explorers, adrenaline junkies and general lovers of the outdoors meet up each November to celebrate and share their love of the wilderness through films, talks, arts and literature. My parents have been going for years, but as it coincides with Kayoung’s birthday we have always found ourselves indulging in other activities. This year however, with the pull of three of Yorkshire’s finest Olympic and Paralympic medallist, including one from my home town of Halifax, the draw was too great to resist. Plus with the addition of the Adidas Terrex 5 mile trail run, there was an opportunity for the two of us to have a dirty weekend after all!

The first festival session (talk/lecture) we attended was devoted to endurance sports and there were warts and all (or rather mangled and manky feet) accounts of multi-day adventure racing where only the toughest men and women compete. The finale was a Q & A with the brothers Alistair and Jonny Brownlee, who collect titles like TBH recruits members. They talk as well as they compete, in particular Jonny, who regaled the large audience with stories of training out in Bronte country and getting stuck on the moors on road bikes while being chased by angry red-faced land owners. It was great to gain some insight in to the minds of two world class athletes, particularly in a sport famed for equipment envy and an obsession to detail. In fact, they spoke of a basic love for the outdoors and the pure enjoyment of being active. They would rather bomb about in the snow on mountain bikes than lock themselves away on the turbo trainer. Alistair claimed that only 10% of their training was tailored to their high end performance, and the rest was simply going out and enjoying themselves; -that certainly made me review my own modest training regime. 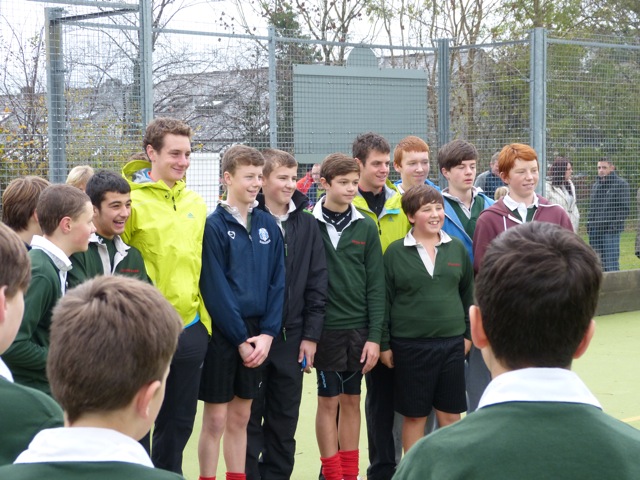 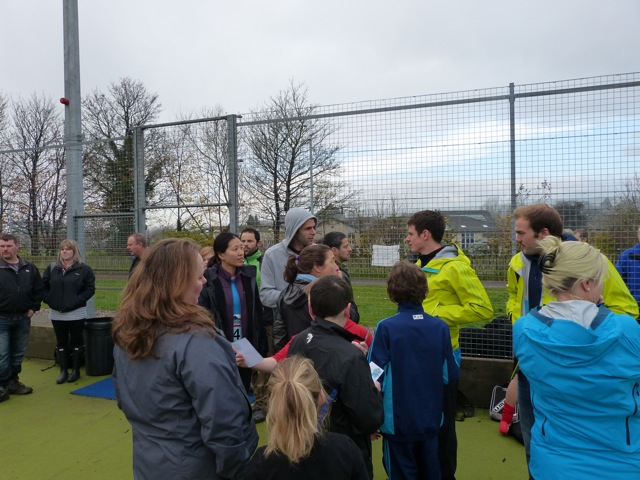 Louis and Jonny talk about the perils of ‘bonking’. Possibly.

It was a great evening but it was the second night that was the unquestionable highlight. The default and understandable emotion is one of sympathy towards anyone with a severe disability, but following the talk by Paralympic medallist and adventurer Karen Darke, I was left reflecting on my own limited set of life ambitions, such are the immense achievements of this super human. She is a wonderful and inspirational speaker that left both Kayoung and I teary eyed in joy of a wonderful life lived to the full.

As a result of a climbing accident aged 21, Karen was paralysed from the chest down, but she is made from tougher stuff than the rocks she studied whilst completing her geology doctorate and has, at the tender age of 41, a CV that puts Chris Bonnington in the shade. Her feats of mental and physical endurance include; handcycling the length of the Japanese archipelago, kayaking a 1200 mile stretch of the Canadian-Alaskan coast, climbing the iconic 1km high El Capitan (click here), handcycling over the Himalayas, and a less than leisurely 600km ski across the expanse of the Greenland ice cap. Whereas most of us would regard completing one such epic as a life well lived, not Karen, who constantly looks forward to the next challenge. This summer she won a silver medal at London 2012 Paralympics in the women’s hand cycling road time trial H1-2. And if you thought she was about to take it easy, she is currently planning a trip to the South Pole in 2013. Simply put, this woman is incredible.

Beyond the talks, Kayoung and I entered the inaugural Adidas Terrex 5 mile trail run on the Saturday morning. On the start line, the organisers let us know it was closer to 6 miles than the advertised 5. This was greeted by groans by most of the assembled runners, but as a Yorkshireman I was rather pleased as that represented better value for money. They also dangled the temptation of a Brownlee brothers signed tri suit as the prize for the first to cross the line. After entertaining a couple of hundred school kids who had turned up for the pre-race warm-up session, Jonny and Alistair were there to start the race. 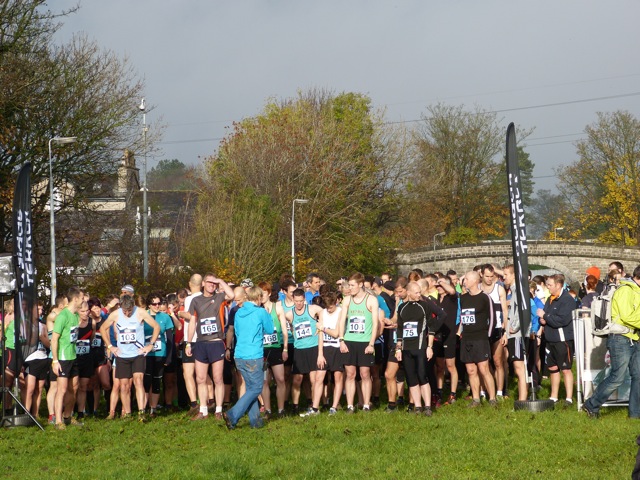 Approximately 150 competitors set off at a frenetic pace, which I thought might be a bit rich, but I stuck with it. We were on flat muddy paths heading south out of the town and had to regularly negotiate slippy stiles and gates and on more than one occasion I almost ‘came-a-cropper’. But I was in the lead group of 5, where all bar one were in club vests and I thought this could be a tasty race. My plan was to stick in behind the leaders for as far as I could and then see what happened, but one-by-one, runners from the lead group dropped off the pace, and before I knew it, at around 2 miles, I was on my own! This is when the fear kicked in, “am I going too fast”, “am I going to bonk”, “are they waiting to pounce”, but then after a quick assessment I realised that I was comfortable and enjoying the race.

We skirted some low lying fields round the town and then took a turn up towards The Helm, the hill that had to this point been overlooking proceedings. For me this is when the going gets good, as I bloody love a good hill. Although I had lost running company I did pass a couple of friendly marshals, one of whom was an old-time competitor from my junior orienteering days, who looked rather startled as I yelled “Aye-up Chris” on my way through. By fell running standards The Helm was a little’n but it had some beautiful clarty and steep sections to revel in and I pushed on hard to the top where I looked round to see if I was still alone. No-one in sight, so spirits up and push on down. It was a glorious day and I was able to enjoy a stunning view back towards Kendal. The route down took us through a mixture of farmer’s field and sneaky alleyways with a few man-made steel chicanes to make it interesting, but all very well marked and marshalled. With about 400m to go I passed my dad who cheered enthusiastically which lifted my spirits even higher and although I thought I was clear, I was going to make sure that I was home first.

Louis and his ‘Victory’ salute

Unfortunately Alistair and Jonny weren’t there to clap me across the finish line, but I was chuffed as hell to have had the rare sweet taste of a race victory. As the rest of the runners came in they weren’t just all splattered in mud but also had big beaming smiles plastered over their faces. Kayoung arrived sweat-free looking like she’d been for a walk in the park, but she had a wonderful first experience racing in the Lakes. 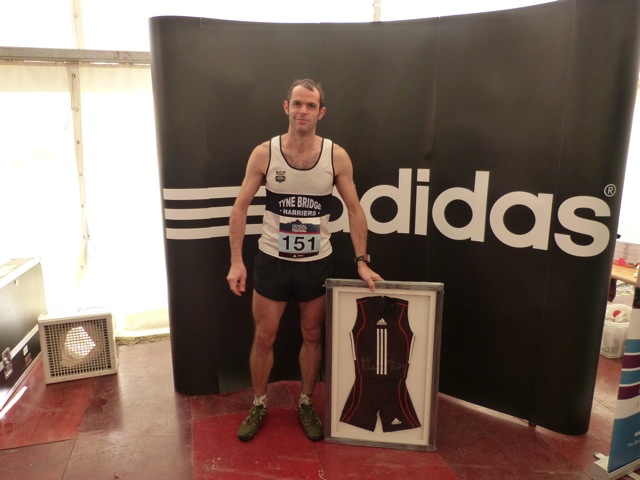 The winner and his prize.

I would like to thank James Thurlow and all his team for putting on a cracking race, certainly one that exceeded my expectations, and maybe a few more TBHers will be there next year to give me a run for my title! 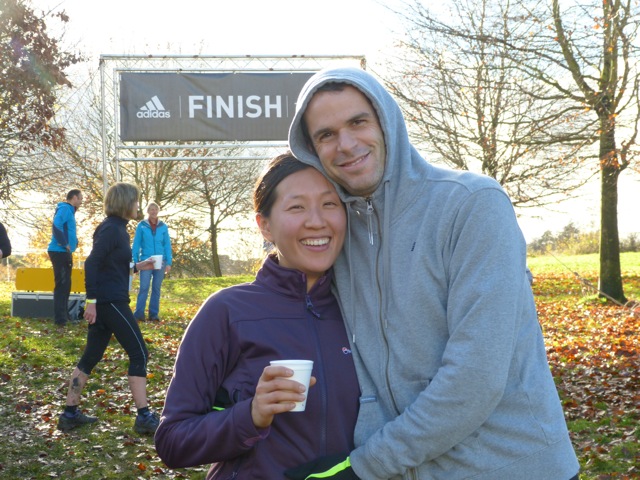 (Thanks to Tim Goffe, Louis’ dad, for the photographs)

Permanent link to this article: https://www.tynebridgeharriers.com/2012/11/20/kendal-mountain-festival-the-adidas-terrex-5-mile-trail-run/