The Dare 2b Spine Race : Preview 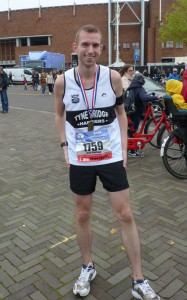 My preparation for Amsterdam had been lacklustre, to say the least. Unlike my first [and only other] marathon in Edinburgh in May, I didn’t do enough training for this one – only 55% of the miles, in fact. This was partly because I was running it alone this time and found sticking to my training plan a struggle, and partly because I made a conscious effort that I wasn’t going to completely sacrifice my social life in the name of running as I did last time – so I arrived in The Netherlands feeling a bit ambivalent about it all.

The conditions on the race day were great. A little windy, perhaps, and I quickly regretted not bringing a disposable poncho to throw away at the start line – but once we got into the Olympic Stadium, where the race starts, I instantly forgot about the breeze and was feeling good and ready to go. The atmosphere was fantastic, with the competitors running a lap around the athletics track, crowds cheering, before we headed out onto the open road.

The first couple of miles were a bit of a pain, with some narrow stretches and lots of weaving to try to find a space. This wasn’t helped by the first water station, which was chaotic to say the least – people climbing over each other to get to the drinks, my pet hate of cups rather than bottles so most of it went over my face rather than my mouth, and people getting in the way of everyone else. Unfortunately, these didn’t get any better and would be my only major complaint about the race – I found myself losing at least 30 seconds every time I wanted a drink, rather than being able to easily pick one up and keep on running as was the case in Edinburgh. Live and learn, next time I will just carry these hydrogen tablets which are very practical when you need to keep being hydrated while racing.

Despite the water stations, however, I found my rhythm and got going at a stready 7:50/mi for the next 13 miles. It was, admittedly, a little faster than my watch was telling me to go but the adrenaline (and my stubbornness) meant that I ignored the frantic bleeping of my Garmin and just kept up that pace. The crowds were fantatic for the entire distance throughout the city centre, with music and cheering along the route, only trailing off as we took a 15km loop into the countryside along a canal path. But soon, we were back into the city proper and surrounded by people willing us on.

Going faster than planned was all fine and well, and I was still feeling pretty strong right up to 18 miles, before my pace rapidly started to drop. I managed a few miles at 8:05 before dropping to 8:15 and then proceeding to make up the pace as I went along. The graph of that bit has more peaks and troughs than a stormy sea. There were some bursts of speed followed by some agonisingly slow stretches, but I was determined to keep on going. I am reliable informed by a supporter that at 24 miles, I looked like death on legs – I heard a call of “take a gel, Guy!” trailing after me, and managed to take half a sachet to get me through the final stretch.

As I reached the “500 metres to go” sign, my Garmin flashed up a message – “workout complete”! Clearly, the workout wasn’t complete… I wasn’t quite in the stadium yet, so I kept on pushing through. I managed to summon up enough energy for a sprint finish across the line with crowds in the stadium again shouting everyone across the line. But as I crossed and pressed the stop button – disaster! I realised that I had programmed it wrong, and the watch had actually stopped when it reached the 26.2 mile mark rather than continuing until I pressed the button. I didn’t know my time!

After an agonising wait (not helped by the Amsterdam Marathon app displaying my clock time but not my chip time) I finally got word of my official result late in the afternoon – 3:39:26, just 1:22 slower than Edinburgh. I was absolutely overjoyed… given my real lack of training discipline and not feeling overly confident in the lead up to the race, I’m really pleased with that result. Definitely a great finish to a good race, and a result I’m proud of :).

Permanent link to this article: https://www.tynebridgeharriers.com/2012/10/22/race-report-amsterdam-marathon/