Circuits in the Park (CITP)

Not just any running book though. Eat and Run is world class ultramarathoner Scott Jurek’s new half-autobiography, half-cookbook and tells the story of one of the greatest endurance athletes who has ever participated. In the UK, Jurek came to fame as ‘the deer’ in Christopher McDougall’s Born to Run, the NY Times bestseller telling the story about Caballo Blanco, the mysterious running Tarahumara Indians of Mexico, and the Copper Canyon ultramarathon race that pitted the Mexicans against invited Americans. At the time Jurek was the runner the Indians most admired and respected, even though he came second in the first race. He then went back and won the Copper Canyon ultra at the second attempt, and donated his winnings—paid in corn—to the tribe.

Both of those images—going back to win, and giving away his winnings—tell you a lot about Jurek the person. At the back of Eat and Run, there’s a select list of his races and successes—many, although not all, of which Jurek won. When you pay a little more attention to the list, you note that at shorter distances (50k, 50m) he doesn’t always win; his best successes come the harder/longer/hotter the race.

Jurek was a self-confessed ‘red-neck’ growing up in the backwaters of Minnesota, hunting, meat-eating, chopping wood and cross-country skiing. It was through skiing, and meeting his best friend, Dusty, that kept Scott fit through his adolescence and first years at university. He ran so he could be better at skiing. Then his friend Dusty won the Minnesota Voyageur race, and challenged Scott to enter. It’s a 50-mile race. The first time he entered, Jurek came second, in 7hrs 44m. He came second the next year too. Then for his third year, running with his friend Dusty, he won, in a time of 7hrs 10m. He’d arrived.

The book is more than about running, though. It’s about what makes a runner, and what makes the very best endurance runner. It’s about the relationship Jurek had with his parents and the lessons they gave him in life. His mum: ‘you can be tough.’ His dad: ‘Do things. Always.’ Those simple lessons are the mantras that go around in Jurek’s head at 95-miles into the Hardrock 100, or lying in an ice bath in Death Valley during the Badwater Ultramarathon (which he won, 135-miles in 25hrs 41m).

But they were also the lessons he held to when he was injured, and during his divorce, or when friends, other runners, fell by the wayside, or committed suicide after a career-ending operation; as people do in life, lose their way. 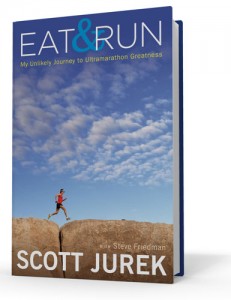 The other major element of the book is the philosophy of a plant-based diet. Over the years Jurek, a thoughtful and philosophical man as well as an amazing runner, started to take very carefully what he was putting into his body: for energy for races, as well as for recovery. And slowly—it was no New Age cold quorn-turkey—Jurek cut down on his meat intake, then became vegetarian, then vegan, and for a while even ate only raw food (although that took up too much time and was just too boring). Each chapter ends with a little philosophical quote followed by a vegan recipe related to the moral of that chapter: so when telling the story of running the Spartathlon, for example, there’s a recipe for his Kalamata Hummus trail wrap.

It’s a wonderful book that builds up an inspiring picture of one of the greatest (Western) ultramarathon runners of all time, of his philosophy and way of life, of the important of environment and food to the runner, and of not only being the best runner you can be, but the best person. When you turn to the index and you look at the sub-headings under the entry for ‘ultramarathoners’, this is what you get: friendship among; love for; as obsessive; personalities; self-awareness; spiritually motivated; support among. It’s more than just running.

Permanent link to this article: https://www.tynebridgeharriers.com/2012/09/11/book-review-eat-and-run-scott-jurek/