In the lead-up to next Sunday’s BUPA Great North Run, several club members will offer they own personal memories of this great sporting event.

Starting things off is David Daniels.

Like a lot of people at the time, I took up running in order to take part in the Great North Run. The year was 1999, long before the introduction of parkrun, so for those ‘outside’ the sport of running, it seemed there were only two races in the calendar; the London Marathon and the Great North Run. And as I hadn’t laced up a pair of running shoes since leaving school many, many years ago, I knew running a marathon would be totally out of the question (and running a half-marathon wasn’t?).

I entered the race in early June, leaving about 4 months to transform myself from a couch potato to a half-marathon runner, and if I needed a wake-up call to tell me how difficult it was going to be, I got it during my very first training run.

Deciding to start my programme one evening after work, I tagged alongside a colleague who usually ran 3 or 4 miles every day.  I was 27 at the time, and the work colleague almost twice my age, so it would be an easy step into the world of running.  Or so I thought.  After half a mile or so I had to call it quits and walked home in shame, having been proverbially spanked.

Thankfully, I persisted with the training and soon progressed to running further than half a mile.

It’s funny, but out of a massive event like my first Great North Run, it’s the small things I remember the most. Watching other runners on the metro as we travel to Newcastle, some laughing and joking, seemingly without a care in the world, whilst others are in their own personal zone, nervously await their destination.  Personally, I was bricking it.

Then getting off at Monument and walking up Northumberland Street towards the start. The dozens of runners on the metro has turned into hundreds, and by the time I reach the Central motorway, hundreds have become thousands. How could anyone run amongst so many people?

Things were fairly relaxed in those days (runners could turn up a few minutes before race start and simply just over a barrier into a starting pen) but as someone who had never raced before, the noise and atmosphere was electric. Clothes were being discarded left, right and centre, everyone was in high spirits and then the gun went off.

To be honest, I can’t remember much of the race itself.  It was 9BG (nine years Before Garmin) and I had no idea about pacing, or keeping tabs on mile splits. I just ran with the masses and simply tried to pass the runner ahead of me.  My finishing time was 1h 37m, and I thought I was the bee’s knees.  The race tee-shirt was put on and the medal quickly hung around the neck. I’d completed my first half-marathon and I wanted the rest of the world to know it.

But then it time to head home and the slow, slow walk to the Shields ferry, and an even slower walk up the bank on the other side of the river.

Mercifully, my mam and dad were waiting for me at the top of the bank to give me a lift back home, and after a few days of self-satisfaction – wearing my GNR tee-shirt for every run – the thought then arose of whether I could run quicker next year.

Sadly the tee-shirt couldn’t cope with the constant use but the medal is still around as a happy memento of that great day. 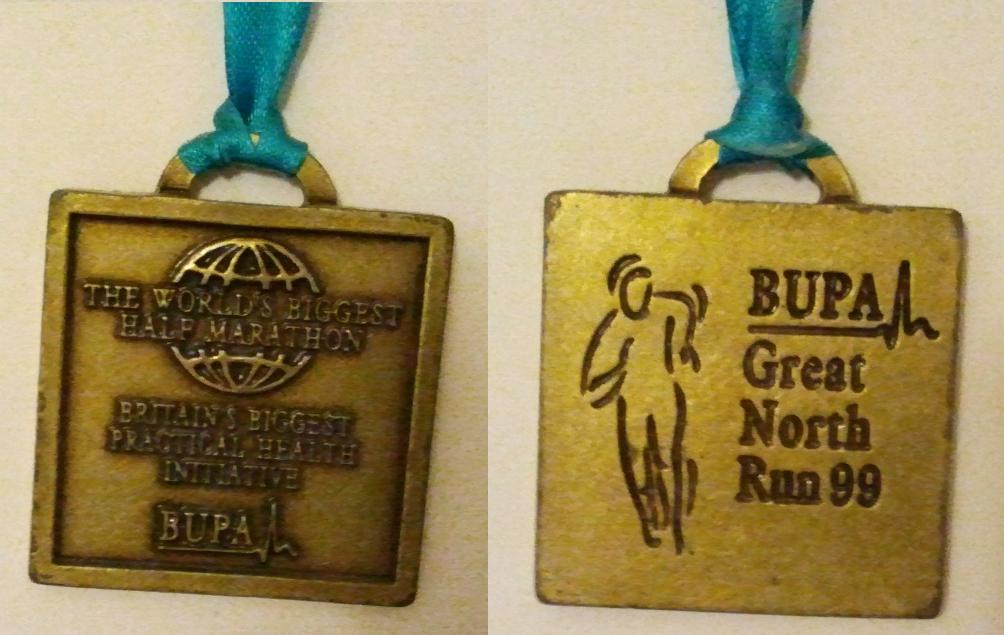 A proud memento of the 1999 Great North Run

Permanent link to this article: https://www.tynebridgeharriers.com/2012/09/08/great-north-run-memories/