Club newcomer, Sophie Marr, was the first female member to finish, in a cracking time of 42m 08s.

Unarguably the club runner of the moment, Keith has kindly provided his unique insight of Tuesday evening’s race.

I arrived at the car park for the race at about 7pm, all changed and ready for the race. Ready that is apart from having an entry! My idea was to run from the car park down to registration at Morpeth AFC clubhouse, enter, get my number and then run back to the car for final preparations before running to the start. That would give me a good 1.5 mile warm up.

Saw captains Paul (running) and Denise (not running, still injured) in the car park and had a bit crack before I ran down to the registration. Paul seemed a bit more concerned about me getting signed on in time than I felt myself, I seem to get that a lot! Anyway, got signed on in time and was heading back to the car when I noticed Denise among the spectators at the main road junction. Handed her my £9 change all in pound coins (I only had £20 note for race entry) and so did not need to go back to the car. This cut my warm up short to about 1 mile but I felt ok and decided to do a bit extra stretching at the start instead.

A good turnout from Tyne Bridge was in evidence at the start and the usual suspects of Mr Moir and Apples were milling about. Darts Chucker Rooney was also there and looking forward to the off. We lined up at the start with a little trepidation, not least because of two officials who decided they were going to keep runners back with some yellow Start Fitness plastic tape which they would either raise above runners heads when the whistle blew at the start or would alternatively just let it go at one end and pull it out of the way. Either way it was going to end in tears with decapitated runners (neither of the officials could in any way be described as tall) or runners tripping up. Anyway, they were eventually persuaded that they needed to rethink their plan and removed the tape so avoiding a disastrous Grand National style aborted start.

After some short announcements the whistle blew and we were on our way with a mad dash of about 800m to the main road junction where we turned left and headed up the long drag of a climb, passed the 1k marker and continued to the next left just before the 2k marker. The course from here was a rolling uphill/false flat until 3.5k when it turned into a downhill through the start area and back to the main road junction for the start of the second lap.

From the start I made my usual hard effort and settled in alongside Mark McLeod and after the initial spurt managed to find a rhythm. I was feeling “light” and took this to be a good sign as long as it lasted without blowing up. I stayed with Mark until the end of the first lap when he started to stretch away as I decided to keep to my rhythm and pace rather than push too hard too early. At this point I was joined by two Morpeth runners, Terry Wall and Nathan Shrubb. We traded places for the whole of the second lap with Nathan eventually moving away from me. I was determined to not let the other Morpeth runner past, as when he had come alongside at one point he looked like he may be in my age group and I wanted more Start Fitness vouchers! I managed to sustain a bit of pressure in the last 2.5 k and pulled away from him so the decision not to go with Mark McLeod proved to be a good one in the end. I found out at the end that it was Terry Wall and that he was a V40.

After going through the start area on the second lap the race finishes by going through an underpass and turning onto an old road section for a 200m dash to the line. As I crossed the line I had no idea of my time as I had my watch set to record 1 mile laps and I am of the Moir school of Garmin user ability. I asked Nathan what his time was and reckoned that I had a good chance of getting under 34mins judging by the distance between us at the finish and his 33’32”. This would be a new PB if it was the case so when the results were posted later and I realized that I had run a 33’50” I was very pleased to have a PB by 30 seconds.

Paul had also run a PB and was pleased to pick up a vets prize at the end, although not the one he thought he was going to get due to the organizers giving one prize (highest ranking) per competitor and this skewing some of the category prizes.

So another good turn out by TBH, both spectating and running, some great performances by all TBH members and some great support from TBH spectators which was most appreciated by the participants. A very well done to all involved.

In the race itself, host club Morpeth Harriers completed the double, with Nick Swinburn (31m 26s) and Jane Hodgson (37m 13s) winning the Male and Female races respectively. Congratulations to the pair of them.

Many thanks to Steve Garrett (Sportypix) for the following photographs. 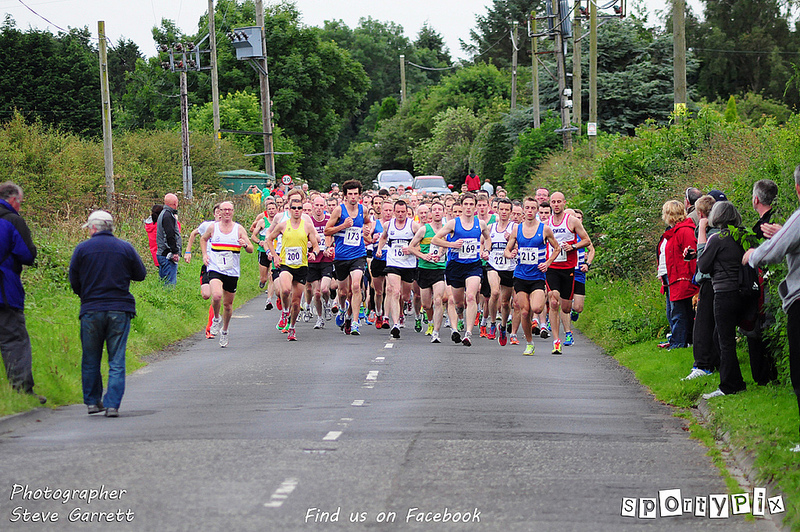 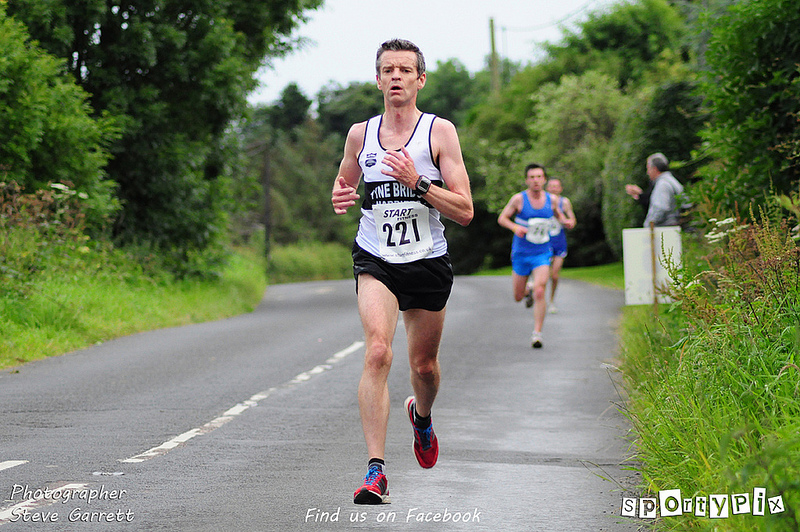 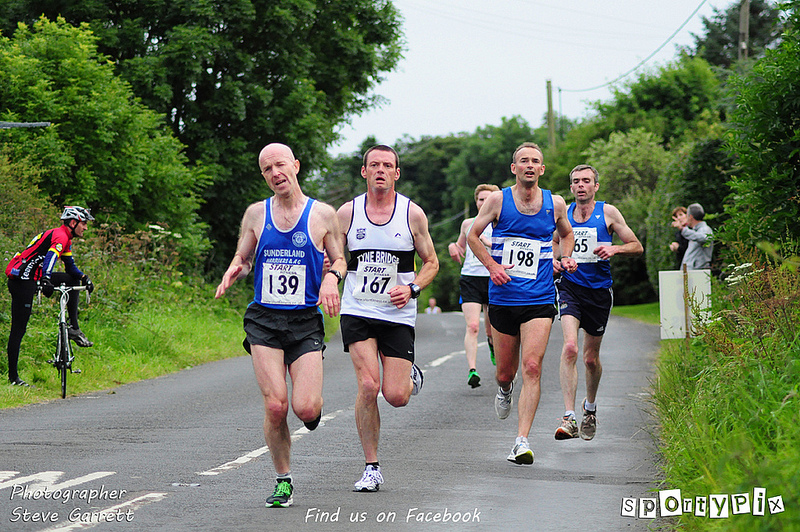 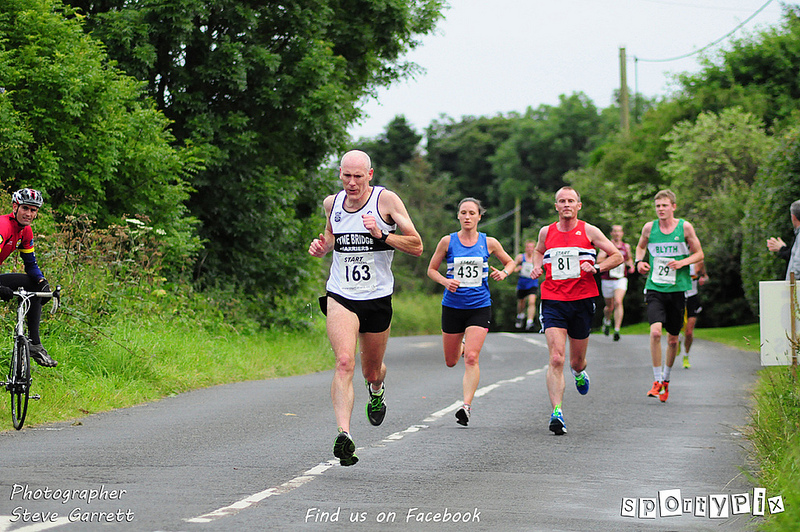 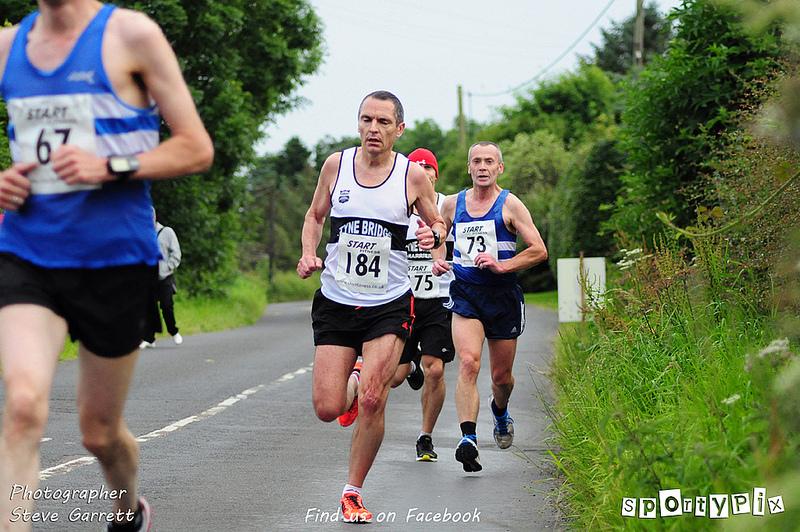 David Appleby (with Stephen Dixon in the red hat) 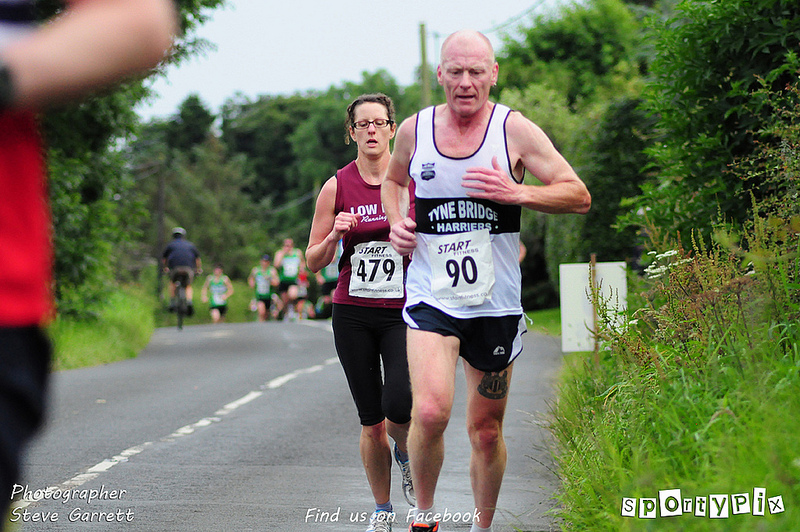 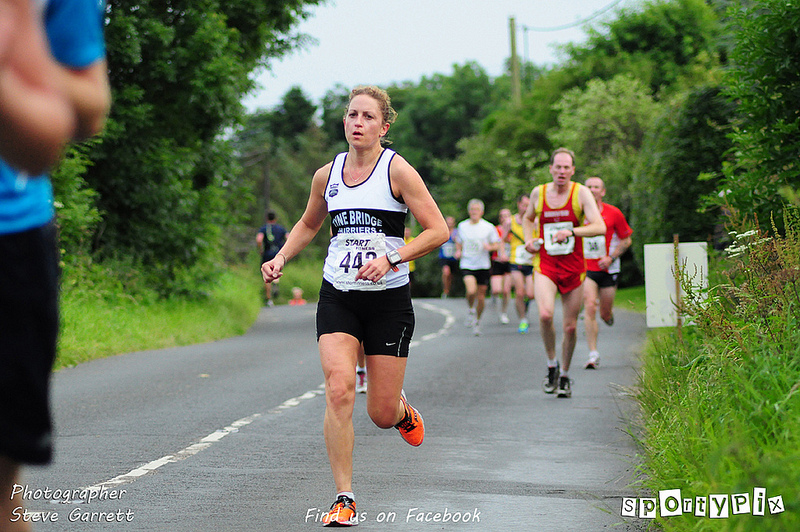 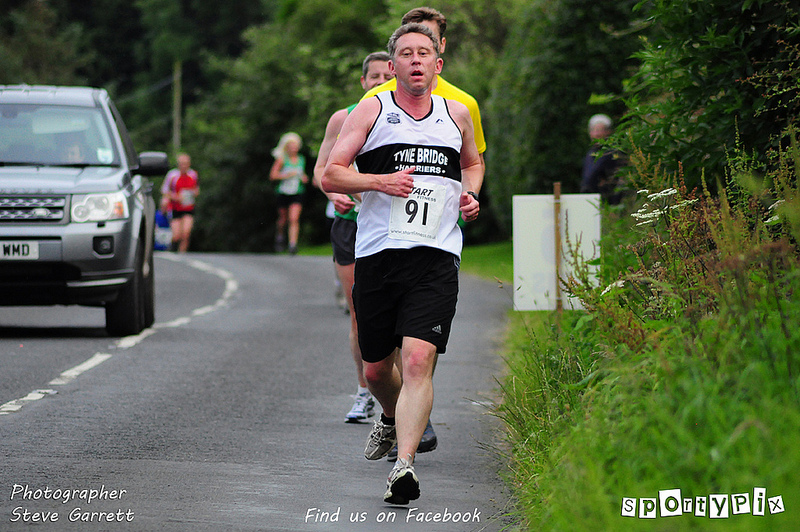 More photographs from the race can be found here