‘Jog on the Tyne’

Having caught the running bug in August 2011, when I participated in my first 10K road race, I sat down at the start of 2012 and identified those races I wanted to have a crack at this year. As an unaffiliated runner, and living in Darlington, I have tended to stick to those 10K road races in the immediate local vicinity, where I might recognise a few faces and, as time has gone on, running club vests.

When I saw the ‘Bridges of the Tyne 5M Road Race’ appear on the race calendar though, I was intrigued. The location and the opportunity to race over a slightly different distance appealed to me, and, after a bit of banter over Twitter with Anji Close from TBH, I duly signed up, convincing a good friend to have a go as well.

In the weeks leading up to the race I continued my endurance running (I’m in training for my first Great North Run!), however increased my speed-work realising that I would need to pick up the pace over the 5M distance. Interval running became a regular part of my weekly training plan, and I discovered a new Parkrun at Tees Barrage, which helped greatly.

Race day arrived and, having taken the afternoon off work to get to the race early, I parked up in a damp, overcast Newcastle, drizzle seemingly hanging thick in the air. I headed across the Millennium Bridge to the Quayside, and examined the conditions underfoot. It was obviously very wet, and excuses started to form in my mind. Self-doubt crept in, and concerns about my footing during the race flooded my mind. In my head I had a target time I wanted to achieve. One week earlier, whilst setting a new 10K PB at the Darlington Pitstop 10K, I had sailed through the 8K marker in 30:14, and this was the time I wanted to match, or even better, however this seemed unlikely now given the conditions. My mind then went into overdrive – the ‘phantom left Achilles twinge’ appeared from nowhere. 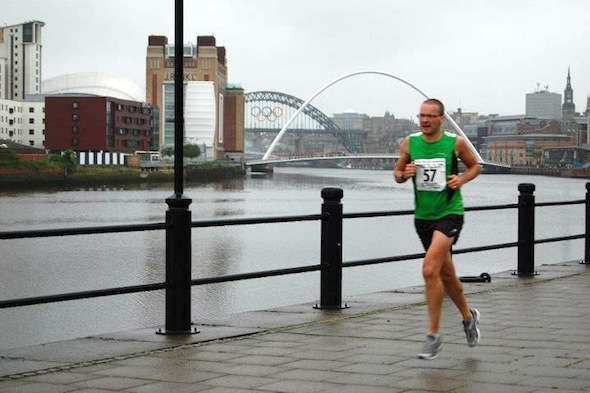 I headed to The Tyne Pub to register and collect my number. Registration was a hive of activity. I bumped into Anji, and we had chance to have a brief chat. She enquired what time I was hoping to finish in. I’m sure I mumbled unconvincingly “somewhere between 30 and 31 minutes”, but made sure I got my excuse in about the wet conditions underfoot. Other runners started turning up, all seemingly with club running vests on. North Shields Poly, Morpeth Harriers, Low Fell RC, Gateshead Harriers, Heaton Harriers, Blyth Running Club, Elvet Striders, Sunderland Strollers and, of course, swarms of Tyne Bridge Harriers! It was becoming apparent that this was very definitely a ‘club race’. Unlike other such ‘club races’ I have participated in, there was a real positive buzz in the air. All too often I have noticed that running clubs in my own area are very cliquey, however not here. The atmosphere under the bridge was electric, everyone seemingly pumped up, ready to take part in this inaugural event.

After warming up it was time to head down to the start line. The air was still damp, but the drizzle seemed to have abated for a short time. I managed to jostle my way near to the front of the pack, dragging my apprehensive mate with me. I’ve read that you have to be ready to go on the B of the BANG, and as the ‘hooter’ went off I was away, leaving my unfortunate mate behind me. I made a fast start, the top drawer club runners pulling away, however I was just about hanging onto a small secondary pack and felt that if I could stay with them I’d perhaps have a chance of achieving my target time. My initial concerns in relation to potentially slippery conditions proved unfounded and were forgotten. Lingering thoughts of tripping over rogue street furniture disappeared as it became noticeable that the course was excellently marshalled. Even my ‘phantom left Achilles twinge’ had mysteriously cleared up.

Over the course of the first mile the pack thinned out. I found myself briefly side-by-side with a Blackhill Bounder, and attempted to exchange a few pleasantries (I’m still not really sure if that’s proper running etiquette). As we hit the first mile marker I glanced at my watch – 5:33! Way too fast! Half my mind was thinking that if you want a fast time you have to go fast, the other half was screaming at me to slow down to a more manageable pace or risk a blow up.

During the second mile I slowed slightly, which meant my new-found Blackhill Bounder buddy pulled away. Unfortunately, I could also hear feet pounding the path behind me. Despite being an inexperienced runner, I’ve generally previously found my level in a race and managed to maintain it, however as one, two, three runners passed me my heart started to sink. Was I now going to pay for that fast start? Were there huge packs of ‘club runners’ gaining on me just waiting to pick off this weak interloper? Fortunately not, one or two more runners overtook me. I recognised Alyson Dixon as she bounded effortlessly passed me, however I managed to maintain a steady pace. Then up a small bank, around the Hadrian’s Wall Marker, and onto grass. Although it was only for a short distance of about 100 metres I didn’t like the grass, and the temptation disobey instructions and step onto the road was huge, however I dragged myself over the sodden turf, losing another place in the process!

Down a small bank, and now it was getting harder and more of a struggle. I started to concentrate heavily on my breathing, blowing hard, but I persevered through the fourth mile. Hitting the four mile marker provided a huge psychological boost, and I started to feel myself running more freely again – still haven’t worked out how that happened. I pinched a place back coming under the Tyne Bridge (that felt good!), and I risked a look at my watch. My doggedness over the last mile and a half had paid off, and I was still on for a sub-30 minute time. I pushed on again, passing the Pitcher and Piano, my glasses now spattered with drizzle. The finish line now in sight, but still a couple of minutes away, I glanced at my watch once again – 27 minutes something! Again I felt myself running quite freely as I approached the finish line, privately thanking the marshal for wearing the ‘hi-vis’ jacket, as my visibility was now patchy at best. As I crossed the line I stopped my watch, however heard the timekeeper mention ‘31’. 29:31! I’d beaten the time I wanted to achieve, and was elated!

I stood by the finish line waiting for my mate to turn up (a very respectable 35:37 for only his second race!) and exchanged a bit of banter with some of the ‘club folk’, before heading back to The Tyne Bar. Unfortunately, as I was driving I couldn’t taste the Tyne Bridge Harriers Ale being served, however I am assured it was lovely.

On my way back to my car I bumped into Anji once again, and was able to say with some pride that (despite the wet conditions, ahem!) I’d managed to achieve my goal. On the whole, a fantastic race, one which the Tyne Bridge Harriers can certainly be proud of organising, and I’ll certainly be back next year to try and better my time. Club runners, you have been warned

Permanent link to this article: https://www.tynebridgeharriers.com/2012/07/13/bridges-of-the-tyne-5-mile-road-race-race-report/