If you like your races to include dodging traffic, careering through shopping arcades, crawling up muddy banks, wading across fast flowing rivers and even an appearance from the Olympic torch; then the Seven Hills of Edinburgh is the one for you. Most of the above are optional, as there is no set route for this event, as long as all the seven checkpoints (each of which are on top of a hill) are visited. 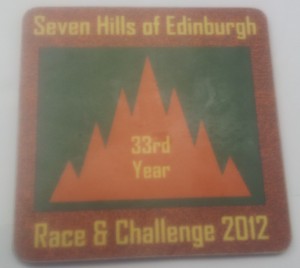 The event is in it’s 33rd year now and is deliberately kept low key (if the Health and Safety man got to know about it, it would probably be banned), so no big sponsors or exhorbitant entry fees, which is how it should be.

There is plenty of representation from the big Edinburgh clubs Carnethy, Hunter’s Bog Trotters and Portobello. I didn’t notice any other English club vests but there was a sizeable Dutch contingent. Not sure what they run up to train for these hills.The course amounts to about 14 miles with 2200′ of ascent and has two seperate start times for the 400 odd runners seperated by 30 minutes with the Challenge going off first followed by the Race.

I wasn’t sure whether to enter the race until the day before (you can enter on the day) as the weather had been pretty ropey, but the BBC website assured me that the rain would relent on Saturday night. Armed with this assurance, I got the train up to Edinburgh (where, upon my arrival, it was still chucking it down) and took the opportunity to do a bit of a course recce near Waverly Station before making my way to my cousin’s house who handily lives in Edinburgh. I woke up bright and early to find it was still raining and got dropped off at the start by my cousin Adrian after first putting in another bit of route homework.

The race starts on the top of Calton Hill at the top of Princes Street, and, after watching the start of the Challenge, I took my place in the starting line. The race initially descends a staircase down Calton Hill which is a bit hairy especially with rain water cascading down it,then onto the top of Princes Street (no stewards or barriers or anything like that) before turning right over North Bridge through the busy traffic. My first bit of route homework was applied at this point when I dodged into a shopping arcade ( think Handyside Arcade circa 1979) and out the other side to find myself on the Royal Mile thereby saving, ooh, at least 10 secs. We got many strange looks from the tourists on the Royal Mile as we weaved through them on our way up to the top of Castle Hill, the first checkpoint. At the checkpoint we then nipped through an open gate to descend down onto Princes Street Gardens by whichever means possible (apparently the gate hadn’t been opened for the Challenge and somebody impaled their foot climbing over the fence!). Having crossed a bridge over the railway line we made our way back up onto Princes Street where we had to negotiate the roadworks associated with Edinburgh’s still unfinished tram. 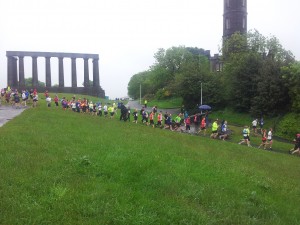 The next checkpoint is on Corstorphine Hill and involves a long steady climb up a straight road before turning up a narrow muddy track (yes, it was still raining) to the summit trig point. The next target is Craiglockhart Hill and this section is the longest and most difficult to navigate as there are limited places where you can cross a river, canal and railway line. At this point I was catching up with tail end Challengers who helped in working out the best route. The ascent of Craiglockhart is the most tricky bit of the whole race as it involves scrambling up a really steep muddy bank. I saw some people ahead of me literally crawling on all fours in the mud.After dropping down off Craiglockhart I linked up with a runner from one of the Scottish clubs (blue vest with 2 white hoops) which was handy as he showed me a few short cuts up onto Braid Hill.

The next target, Blackford Hill, wasn’t far as the crow flies, but involved dropping down to cross the Braid Burn.I followed some runners in front of me who disappeared into some woodland, and started to wish I’d worn some trail or fell shoes as it was a tricky and muddy descent with a thigh high river crossing at the bottom. The ascent at the other side was equally tricky (and nettley) but we had the pleasure of a bagpiper at the top of Blackford Hill serenading us. Descent off Blackford was fast and furious and at the bottom of Observatory Road we nipped through some allotments before a section through the streets of Newington. As  we approached the Commonwealth Pool I was feeling a bit smug as I was about to put my early morning reconnaisance plan into operation and sneak ahead of the field. My cunning plan was to nip into the ground of the University Halls of Residence and squeeze through a gap in a locked turnstile in a stone wall. However,when I got to the turnstile I found there was a queue of people lining up to do likewise and didn’t feel so smug.

The next target was the big beast, Arthur’s Seat, weighing in at 251m. This involved a long and slippy, thigh busting ascent, with a variety of routes being selected, some more hairy than others. The top was in thick cloud, so the final destination, Calton Hill, couldn’t be seen. Care had to be taken as a lot of the exposed rock was very slippy and this would not be a good time to go arse over elbow. One final obstacle was to negotiate the massed ranks of the pink- tutu clad Race for Lifers, whose own event (5 and 10k) was taking place simultaneously. All that was left was to ascend Calton Hill via the Scottish Parliament, to the finish and collect my quiche, apple pie, Jaffa cakes and souvenir place mat. An added bonus  at the finish was the prescence of an Olympic Torch bearer with torch which made my cousin’s day (Adrian was at the finish and had popped up at various points around the course on his bike to cheer me on). I also invested the princely sum of £4 in a limited edition Seven Hills towel which was immeadiately put to good use as it was still raining. Never trust the BBC ‘s weather predictions! 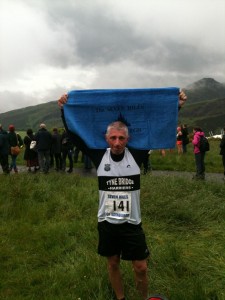 My time was 2 hours, 10 minutes, something and I finished 48th in the race . I have now done this race twice and it is probably my favourite, but not one for the faint hearted. 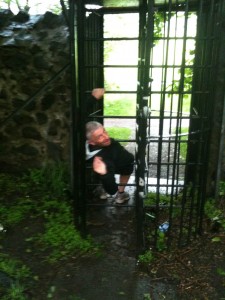 One of the many obstacles?

Permanent link to this article: https://www.tynebridgeharriers.com/2012/06/18/seven-hills-of-edinburgh-race-report-17th-june-2012/