I only decided to enter the Bamburgh on Monday of this week, basically because I like Bamburgh and the Northumberland coast. So Bamburgh combined with running, it couldn’t be bad could it?

As is often the case with Run Northumberland events the race is usually an early start, this was not different with a scheduled start of 9.30. This meant that an early departure from Newcastle of 7.30 was required in order to make sure registration formalities and required warm ups were completed in plenty of time. The weather forecast had been for a cloudy but dry morning. This proved not to be the case as a steady light drizzle started approaching the village of Bamburgh. On arriving at the castle and getting out of the car I was taken back by how cold it was up on the coast, to put it in basic terms it was bloody cold.

The race HQ was at the cricket pavilion in the shadow of Bamburgh Castle, a more impressive venue for a race would be hard to find. I had heard that there wasn’t a big entry for the race and this was confirmed at registration. From what I could gather only about 230 pre-race registrations had been made, this was a bit disappointing given the surroundings and the fact that the course was a genuine road race held on open roads, which in itself is becoming a rarity. This was also one of the rare occasions where TBH vests weren’t out in abundance, as far as I could establish I was it. I couldn’t see any ‘big names’ warming up, I saw a posse of Morpeth Harriers including top Vet Phil Walker but that was about it as far as the sharp end was concerned. From the registration it looked like unattached runners would make up the majority of the field. Conditions were cool and damp with a noticeable brisk NE wind; which would definitely have an impact on the last 4k of the race.

The course had been adjusted this year with the race start moved from the village to the top of the hill at the back of the Castle. This meant that the finish would finish directly on the cricket pitch rather than the previous arrangement, which included 2 ½ laps around the cricket pitch. For the start athletes faced south, with spectacular views of the Northumberland coast.  After a fast downhill start around the south walls runners headed into Bamburgh village. The fast downhill start saw Elswick’s Dave Jardin do a kamikaze sprint take the lead at the bottom of the hill soon to be overtaken by a big group including about 6 Morpeth runners and eventual winner Carl Taylor. 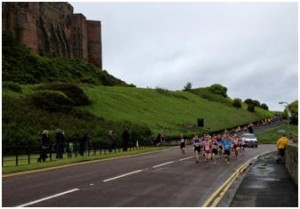 After turning out of the Village at the Victoria Hotel the undulating course came into its own, with numerous drags over the following 5k. The inclines were nothing to difficult but definitely noticeable. Carl Taylor took over at the head of the field at approximately 2k and wasn’t to be overtaken. Former Morpeth junior Carl who is now unattached and based in Amble finished in an unofficial time of 34.02. For the first couple of kilometers I was running with a guy from Musselburgh Harriers, I managed to drop him after the 2k mark and was largely on my own after that. Unable to bridge the gap to the group in front but keeping a steady pace on the undulating course. I passed the 5k in 18.12 and felt fairly comfortable, in the knowledge that the last 4k would be into a brisk NE wind. 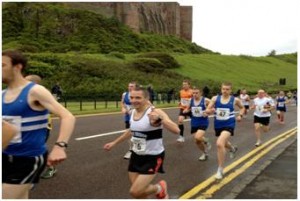 The race gets a thumbs up from David

As expected the turn at 6k brought the headwind but also the surprisingly undulating road, in all of my visits to Bamburgh I hadn’t noticed how much the road rises basically along the entire stretch. I was working to catch the runner in front of me a Sunderland Harrier, just as the gap was closing an Alnwick runner stormed past me in the last kilometer. I tried to stay with him but he was just to fast. I used him to try to bridge the gap but was running out of road. The Alnwick runner caught and passed the Sunderland Harrier only to be caught again on the line with me a further 5 or so seconds behind. The Alnwick runner actually beat me at the Clive Cookson a couple of weeks ago by about half a minute so I can’t be too disappointed. I finished in 37.12, in 13th position, only 12 secs outside of this year’s best time. I think I am actually getting the London out of my system. Eventually. 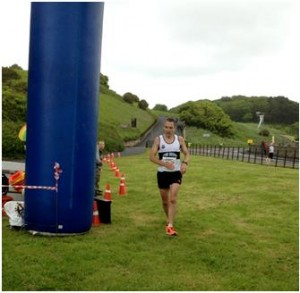 After Carl Taylor took the win, second place went to another unattached runner Alan Weir. In the Womens race once again an unattached athlete, Alice Duvivier, took the honours with an unofficial time of 42.02.  I think the team race went to Morpeth with about 6 runners in the top 15 by my estimate.

My overall assessment the Bamburgh 10k is a really good addition to the local race calendar and deserves more support. The entry fee was £11 for Club entries with a further £8 if you wanted a t-shirt. This is where it can become a bit pricey. The course is not easy and can be described as testing, with some tough drags throughout, but it is well worth the effort. Bamburgh is a good course with some unbelievable scenery, so try to make every effort to take part in future running’s of the race if you can. It’s another one where TBH could sweep the board if we wanted.