When the TBH team was heading down to London for the Virgin Marathon, I didn’t spend much thought on them, because I myself was setting off to run the Enschede Marathon. Enschede is an old town in the eastern Netherlands. It almost completely burned down in 1862 in the great fire and had to be rebuilt. In WWII it was one of the first Dutch cities captured by the Germans. Now it is known as the home of the Grolsch brewery. Some might remember the fireworks disaster of 2000, when a fireworks depot exploded and 15 streets were incinerated, 400 houses destroyed and many more damaged.

Now in its 65th year, the Enschede Marathon is the oldest marathon in the Netherlands. Here is some footage from 1947 with 51 runners at the start.

The plane left Newcastle on Saturday. I landed in Amsterdam and took the train to Enschede. The train was delayed for some reason and missed the connection in Amersfort. I would be an hour late at the B&B. The proprietor had asked to give him a ring before arriving, but my mobile didn’t work in the Netherlands. I had spoken to the THREE customer service beforehand to ensure this would not happen, but now it had. There was WiFi on the train though, and I send an email to the B&B. I also facebooked my family to let them know I had landed safely.

My B&B was a 5 minutes walk from the train station. On entering the house I immediately noticed the steep stairs and thought to myself that I will have a hard time using these on the day after the marathon. At that point I had no idea that a bunk bed was waiting for me, and that the stairs would be the least of my problems.

Sunday morning I got up at 7am to collect my race number at the inschrijving (registration office), which opened at 8am. My number could not be found, until it was realised that I was a buitenlander (foreigner). I was lead to a different desk. I paid €37 for race entry, and a further €20 for the t-shirt in cash. The t-shirt had already been sent to my home address. At the time of writing I still haven’t received it.

Back at the B&B I got a bit nervous and couldn’t wait for 10:30, the start. On the internet I searched for cinema or theater performances that night, and found a theatre production at 4pm.

Eventually it was time to jog down to the start. I set off much too early, so I had to stand around a bit. I used the time to look for a Dutch friend I met at a race last summer when on holiday. It is this friend, Andre, who suggested the Enschede Marathon to me. I didn’t spot him before the start though.

Before the marathon there were a 10k, a 5k, and strange enough a 10 miler. There would also be a half marathon around lunch time. I was standing near the start area and watched. Nerves were kicking in. Only four weeks ago I was standing at the start of the Run Northumberland Half Marathon in Wallington. I never made it over the start line then as my quads cramped up and demobilised me. All I wanted to achieve today was get around the course in one piece.

There were pacemakers marked with coloured balloons for different finishing times. The ones that I considered were green 4:00, yellow 4:15, and orange 4:30. I didn’t have to choose a colour, but I certainly had to choose a pace. When it was time to assemble I found myself near the green balloons, and hoping against hope I decided to go for 4 hours.

A shot and we were off. It was cool, about 5 or 6°C, and dry. The route was two laps of the half marathon. The entire race was completely flat. The start and finish were on the Boulevard 1945. We ran across the town centre, but mainly through suburbs.

I earned several petje af (hat off) from other runners for sporting my sandals. The spectators reacted as well, and shrieks of slippers! accompanied me. What fun! 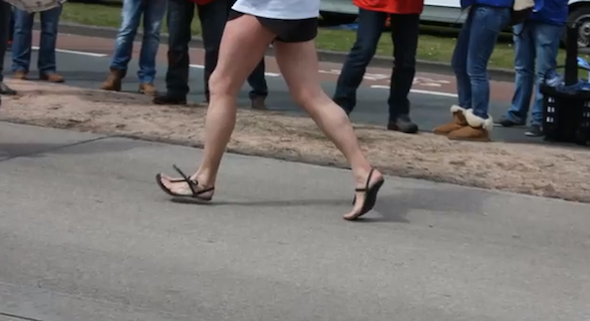 The ‘sandal’ is really not more than a rubber flap that assumes the shape of the foot.

A couple of miles into the second lap I took a plaspause (toilet break). When I re-emerged the balloons were still visible further down the road. I knew I had about 10 miles to catch them, so I did not hurry at all. I took it very easy. I had a number of nice conversations along the way, not only about sandals. The sun came out, and temperatures soared to 11-12°C, and I had not applied any zonnebrand (sun screen). There were plenty of water stations with a choice of water and energy drink. 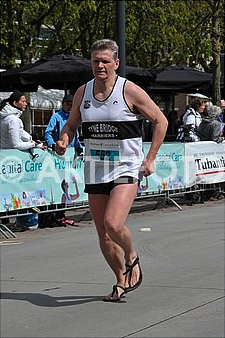 All the way I never bothered with my watch. I simply followed the balloons. At the 40km marker I realised I would not catch up with them, although they never went out of sight. I prepared myself for a final sprint. I was already happy with the race as the dreaded wall never materialised. From about kilometre 32 I was anxious. Luckily there was no need.

It was now a few hundred metres, a runner passed me, we got a bit closer to the finish, and I put everything in to catch the guy again, zoomed past and across the finish line, staggered further to grab my medal and drink, and found myself on the market square. No goody bag or anything. It was then that I met a few runners I spoke to during the race, and I also found my friend Andre. I made my way to the massage tent.

Now I really had to hurry if I wanted to make the theatre. Suddenly I felt really cold. During a quick shower I established that I was blister-free, and off I was again to find the venue. I was the last person to sit down before the curtains opened. The play we saw was Jaloezie (jealousy) by the Argentinian-German writer Esther Vilar. In this relationship comedy three women are fighting by email over one man. It was funny and you had to pay attention. Now the emails were read by the sender, now by the recipient, and sometimes this even changed mid-email.

Because it was an afternoon performance it was still early in the evening when I left the Wilminktheater. I hadn’t eaten anything since breakfast, so I nibbled a pizza on a three hour walk. I somehow managed to return to my B&B, and climbed into my bed.

My train back to Amsterdam left at 8am. At lunchtime I was back in Newcastle.

This was not the London Marathon, but it had a nice atmosphere and was very enjoyable. The crowds were terrific. The word slippers I must have heard about three thousand times that day. On a personal level I was very pleased that I kept a steady pace all the way through, without hitting the wall, and all that after the Wallington disaster. A leg massage last week by our very own Lisa Walker had made all the difference. It was probably the easiest marathon yet.

A few days ago the personal videos have been released. It is only now that I found out that the poor chap after me collapsed on the finish line. I feel really bad, I didn’t even look back!

Permanent link to this article: https://www.tynebridgeharriers.com/2012/04/29/enschede-marathon-race-report/