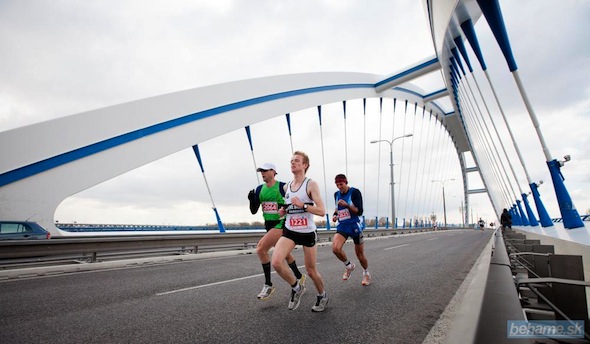 The second half marathon that I entered for this year in Europe was The Bratislava Polmaraton. I had also done this one two years ago and I entered for this one again as it’s not every day when you can go to an Eastern European city. However, some things were different this time around compared to last time: the expo and race registration were found near the Europvea shopping centre, a modern shopping centre that gives the metrocentre a run for its money despite its smaller size, and the course was slightly altered, with the route taking in Petrzalka first, found south of Bratislava across the Danube, and going around and this time actually though the historical centre of Bratislava in the concluding stages of the race.

The plan for this race was to simply get around as I’ll be doing another half marathon in two weeks time in Vienna, only 60 kms away from Bratislava which makes these two cities the closest capital cities in the world. So with a couple of days free before the race, I went for a couple of short runs where, with only wearing shorts and t-shirts, I got a few funny looks from the locals despite mild temperatures. It was also necessary to pick up your number at the expo where you got a bag full of stuff (interestingly, this goody bag is probably one of the only few you could use in future occasions, though it’s best suited for a few items).

Sunday came and since I knew I wasn’t going to race this one, I went for a 3.25 mile warm-up to do a few more miles for the day, and since I was only wearing shorts and the TBH vest in 5 degree weather, there were a few people who did give some odd looks at me, even the other runners warming up. After this short run it was then time to get to the starting pens, where everyone else bar one runner was wrapped up, even one of runner had a coat, hat, gloves and running pants! Shortly before the start at 10am, an interviewer asked a few runners some questions to what I guessed as national Slovak TV. Fortunately he didn’t ask me anything as I wouldn’t know what to say for obvious reasons but I think I got in on the shot so the TBH vest could have been on Slovakian telly!

The start of the marathon and half marathon was given at 10pm. The route went out by the Danube towards Bratislava Castle, then onto Novy Most (New Bridge, recognisable with its UFO-shaped restaurant at the top of the bridge) and into Petrzalka, home of the largest Communist-era concrete block housing complex and where most of the marathon and half marathon route would run around. There weren’t many people round here supporting but they were always cheering, and the atmosphere around the relay change was always electric. Looking at my times on the watch, I knew I was going too fast for what I wanted to run, but it was evident the wind played a part in it as my times slowed slightly when going back towards Bratislava.
The run back to Bratislava went off the main road and onto some trail paths where things got quiet, but it was surprising to see it starting to snow here, and quite fortunately it only snowed in intervals. I ran the first 10kms in sub 36 minutes and was feeling fine. The course then reached near the banks of the Danube, and after a few turns and passing the third relay stage handover point we were 10 miles in on Apollo Most (Apollo Bridge), a modern bridge painted in white and blue which was great to run over with some good views of the Slovak capital. 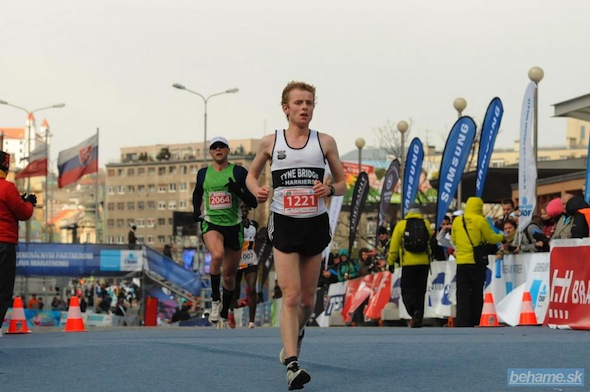 The final 5kms went through the start again and I was able to see just how relaxed I was on the big screens for spectators (or for any vain runner, if you like). The course snaked through the streets of Central Bratislava and into the historic centre up towards Michalska Brana (Michael’s Gate) and down narrow streets to Hviezdoslav Square and along to Hlavne Namestie (Main Square). The half marathon course didn’t go past the Old Opera Hall but the (un)lucky marathon runners did get to see it on the other side of Hviezdoslav Square, named after the Slovak poet. This part was quite difficult with the twists and turns as well as the cobbles of some of the areas around the old town, but I was still comfortable and not feeling out of breath. The finish was near the start area, and as I passed 13.1 miles my time was 1.15.31, but finished at 13.18 miles at 1.15.58 in 16th place in an average time of 5.45 min/mile (official results added a few seconds on), feeling a bit heavy but still quite fresh, feeling quite confident about my next half marathon in Vienna on 15th April (and hoping the wind dies down).

Although the route isn’t the best I’ve been on, I’d still recommend a trip to Bratislava for this just to see the city. Even if you’re not keen on doing the longer distances, there is the kid’s run, hobby run (4.6km) and 10km on the Saturday before.

For more information here is the website for the 2012 edition: http://bratislavamarathon.com/en/home.html

Permanent link to this article: https://www.tynebridgeharriers.com/2012/04/08/bratislava-half-marathon-race-report/