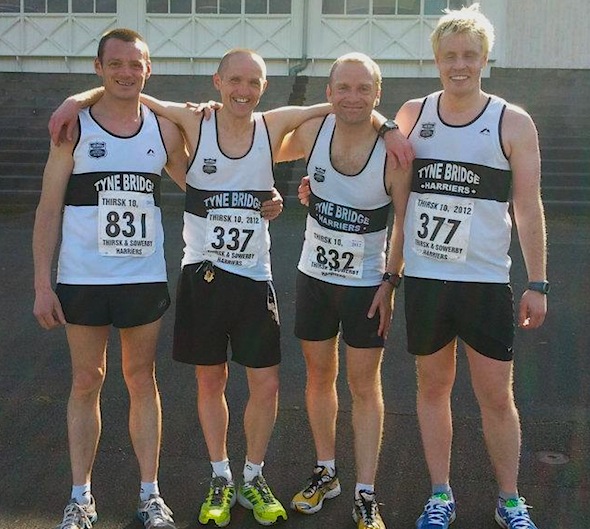 Last year eight Tyne Bridge Harriers set off for Thirsk in a state of some excitement. For all but Micky Baker, it was our first race for our new club. Our club had just been accredited by UK Athletics and we had not raced since November 2011. We were raring to go. This year, the Thirsk 10 was a relative footnote in another huge weekend for (The Mighty) Tyne Bridge Harriers. Yesterday the women’s and men’s teams were promoted in the North East Harrier League which we could never have foreseen 12 months ago (particularly as we did not have enough women to make up a team!). Also, whilst we were running in Thirsk, some brave souls were heading across to Wallington for a very testing half-marathon.

Summer had set off from the start line the previous day and, when we broke through the fog that had engulfed the north-east coast, it just became sunnier and sunnier. Thirsk racecourse was a lovely setting. Darryl Davison, Paul Hilton and me had a stroll around the latter parts of the course whilst David Daniels undertook a 7 mile warm-up run as part of his preparations for the London Marathon.

David arrived back at his car right on cue as the race officials suddenly went a little crazy. With 15 minutes before the start they began loudly urging everyone to “hurry up” as, “there’s a long walk to the start”. In fact it was about half a mile to the start! We showed our professionalism by slowing down, applying more vaseline and began thinking about attaching our chip cards to our shoes. We jogged to the start where the race officials herded everyone into a small field and asked them to stay there for 10 minutes before the start. Once again, we showed our professionalism by jogging off down the adjacent country lane…

Finally, we were called to the start. At last we were off…

Paul set off and recorded a 5/46 first mile. I managed to stay with him for about 2 miles. At three miles we hit the only hill in the course. Paul began to build up a lead on me and he was in full flow. At that point the field began to stretch out and the roads were open to traffic. However, it was very well marshalled and there was relatively little traffic. I don’t think that the field had the same quality at the front as it had last year, although Yared Hagos was away and clear at the very front of the race.

At seven miles you can catch a glimpse of those who are ahead and behind you as you run down to the end of a quiet lane and back on the opposite side. I saw Paul and he looked very strong and was in a top-twenty position. He has maintained very consistent form over the past year despite being a leader in TBH and working eight days a week. If he ever had a holiday and was able to relax and sleep this guy would win races!

I saw both the DDs behind me, David looked very comfortable and Darryl less so! He was suffering with his knees and was just looking to get to the finish. Apparently he was spotted easing his knees with a few drinks in ‘The Lonsdale’ pub later in the afternoon!

I love the final two miles on this course. They are downhill and fast. I managed to pick up the pace but just failed to break 61 minutes. I saw Paul sitting on a plastic chair very disconsolate as he had ‘only’ recorded a time of 59 minutes 15 seconds! He had run a good (not outstanding) race and he will think better of it upon reflection.

I was unable to dig deep and keep knocking out sub-6 minute miles. For me, this was another stepping stone towards my marathon at the end of May. DD was satisfied with his 63 minutes and 50 seconds straight after a 7 mile run (!) and Darryl was very happy to get to the finish and find his sweet supply.

All in all, another chapter in the expanding TBH book (who will write it in the years to come?), we all enjoyed the course and the well organised event. Paul insisted on checking the photos at the end before he would give permission for publication. I’ll let Shades pick the one he wants to use and he can face the wrath of the Captain if he chooses the wrong one!

Permanent link to this article: https://www.tynebridgeharriers.com/2012/03/25/thirsk-10-race-report/