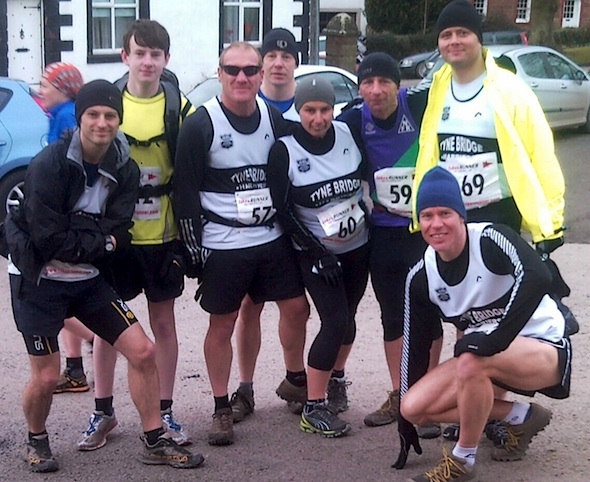 Saturday morning saw the advance party of the TBH fell running division rallying at Byker Pool to make the trip over to Cumbria to take part in the High Cup Nick fell race. Numbers were slightly down on what had been expected so Messrs. Tollitt, Kirtley, Varley, Ms. Deritis and Cassie the dog were able to pile into one car and head over to the picturesque village of Dufton which is nestled beneath the Western side of the North Pennines. We were soon joined by reinforcements in the form of Jonathon Powell and Halls Mark, Martin and Ryan.

The race started from the village green with the brightly coloured club vests of the fell running clubs of northern England in evidence. The pre- race talk from race organiser and top fell runner Morgan Donnelly advised us that conditions were ideal and that ‘the slippery rocks weren’t that slippery’. Armed with with this cryptic advice we set off on the 9.2 mile circuit that would hopefully see us all back in Dufton Village Hall in the next couple of hours sampling the cakes that had been tantalisingly displayed during registration.

Mark Hall initially set the pace for squad TBH as the race snaked through the village and along country lanes before a right turn at a strategically positioned tractor took us over grass tussocks interspersed by bog. Any notions of keeping your feet dry were soon forgotten. I was already engaged in a tit-for-tat battle with Jonathon Powell who was hoping to wreak vengeange for me beating him at the finish at the Simonside Cairns race back in December. The next section consisted of a bit of a switchback on varied terrain with Mark maintaining a good pace and Jonathon overtaking me on the uphills and me squeezing past him on the downhill sections. After plodging through a stream and descending through a bracken clad fellside, the main event started to come into view in the form the spectacular natural feature that is High Cup Nick.

High Cup Nick is a gorge incised into the side of the Pennines, starting off as a wide U-shaped valley. It climbs and narrows to a rocky defile and forms part of the Whin Sill which you will all remember from your geography O level. (Note to younger readers, they were a bit like GCSE’s but harder!) The course took us along the right hand side of the valley floor, and although initially flat(tish), the going is tough as it consists of more tussocky, boggy terrain with no sign of the footpath shown on the map. As the valley narrowed and climbed the going became more rocky with Mark still out ahead and Jonathon and I going shoulder to shoulder neither wanting to give the other an inch. After crossing a wall stile, the going changed dramatically with the ascent steepening and the number and size of boulders increasing.

What also became apparent was the nature and extent of the climb up ahead with the lead runners giving a sense of scale. Jonathon and I closed in on and then overtook Mark. I was then the first to blink with Jonathon managing to keep on running as it got seriously steep whilst I ground down into low gear adopting the hands on thighs walking mode. At this point the cries of the spectators and marshalls at the top echoed around this spectacular rocky ampitheatre and spurred the runners on up the steepest part of the climb which by now was a vertigo inducing (Rob?) single file scramble.

It was short-lived relief upon reaching the top as it became apparent that there was a bit more of of a climb to be done before the descent started. A glance down into England’s answer to the Grand Canyon illustrated the scale of the climb just undertaken with a ribbon of barely discernible figures just visible far below. Jonathon had ,by now, gained about 100 yds.on me as we made our way along the Pennine Way .I became distracted by views to the south and west of the Lakeland and Howgill Fells, dappled in late winter sunlight. I avoided becoming too distracted as, to my left, there was a sheer drop back down to the valley floor. The time for sightseeing passed as the long descent began, and attention had to be paid to to the rocky trail to avoid taking a tumble. I managed to keep Jonathon’s black and white vest in my sights and picked my moment to close down the gap and swoop past him on a rare stretch of grassy embankment to the side of the stoney path. A turn to the right took us through a series of grassy fields with the route well signed with pennants made from brightly coloured sheep feed bags. I was convinced that I had made my move too soon and that Jonathon was going to charge past me at any minute so I concentrated on keeping up my momentum as Dufton came into view below. There was a slight sting in the tail in the form of an uphill lane, which felt much steeper than it probably was, and which took us into Dufton. The finish line was on the village green and I was pleased to see that I had knocked 10 minutes off my previous time from 2 years ago. Jonathon soon followed across the line, next was birthday boy Mark who was mourning the loss of his hat somewhere along the route. Next up was a bouyant looking Nick ,who had been engaged in his own battle with a relieved looking Rob, then Martin, trainer clad Ryan with Vicki completing the TBH octet.

Now it was time to enjoy the delicious vegetable soup and bread being dished out to the runners and afterwards sample some of the dazzling array of homemade cakes available. Whilst enjoying post run scran the prizegiving followed with first place, and a course record of 1.01.11, going to Carl Bell of Howgill Harriers.

TBH were not left out at prizegiving as Vicki was summoned up onto the stage, still sporting her somewhat bedraggled TBH vest, to be presented with the highly sought after 171st place award. She came away grinning from ear to ear and clutching a box of Thornton’s toffees.

This was a fantastic day out in a beautiful location. We were able to run in a well organised and marshalled race against some of the country’s top fell runners and, afterwards, enjoy food and drinks prepared by the Dufton residents in what is the year’s major fundraiser for the village hall. All of this for a fiver. What’s not to like?