More success at the Weekend for the mighty Tyne Bridge Harriers as we had 6 full teams representing us at the Royal Signals Relays at Hetton Lyons Country Park on Saturday.

As is becoming the norm now, we have another two fantastic reports from both the Men & the Women.

Our first race report is comes from one of the newer female athletes at TBH, Anji Close

It started about a month ago when Captain Hilton asked me during a Facebook conversation whether I fancied running in the ladies team for the Signals Relay in February. I immediately checked it wasn’t XC, as now you all are coming to know I am allergic to such shenanigans, and said I would think about it. Hilton took this as a “yes” and put my name in print, probably knowing that if it had been left up to me deciding it might have never happened.

Now make no mistake, I always suffer from pre-race nerves, and I have actually found that the more I compete; the worse my nerves have become. Since signing to TBH officially in January, I have become faster, stronger and more confident in my running, but the nerves have never subsided. So as I made my way to Hetton on a “blowing a hoolie” sort of Saturday I actually wanted to cry a bit. Nervous racing for me is one thing, but nervous racing in my first time ever in a team event in my life was really something.

When I arrived, Sean disconnect the telephone line Kelly and Louis bowling bum Goffe were waiting for me and we made our way to TBH HQ where Su and Rob were already battling against the hoolie to pitch the tent. We passed the time *freezing* by doing a professional trot of the course during which Big Ron remarked the hill in the first quarter mile was a bit “cheeky”, while I was just glad to get out of the wind for a bit.

Cue lots of stripping and HGMrubbing going on, and it was nearly time to start. Catherine Willis reassured me I had nothing to worry about and I was really pleased to find out that she was going first, which would have been my actual worst nightmare.

I was “penned” with Denise Waugh having a nightmare with Garmin unable to locate her satellite and Rob Kirtley having a nightmare waiting to take over from Dave Embleton. Suddenly it was my turn to run. I won’t tell you the expletives I muttered to myself, as those who know me can probably guess. Catherine looked comfortable as she finished in 15:29 and it gave me confidence to fly off fast. The first lap felt comfy even in the windy conditions, and I couldn’t believe the support on the course, especially seeing Sean strolling round and later Kenny. Coming into the end of the first lap I also saw my parents who had turned out to see me run not just in black and white for the first time, but for the first time ever. This coupled with the tremendous support from TBHers on the line and in the penned area really pushed me on. I’d come through my first mile in 7:00 and negative split into my second in 6:55, which was incidentally the fastest mile I’ve ever run.

I sprinted into the finish to hand over to Elspeth who charged off while I stopped and worked on my decision whether to be sick or not. This was a negative, in case you’re wondering. I’d done my stint in 15.54 and obviously done a bit of “weaving” as Garmin clocked 2.28! I was so happy with my time and most importantly I felt like I couldn’t have given any more. After me, Elspeth and Joy also ran in fantastic times (16:14 and 15:15), making TBH ladies breeze into 10th out of 30 teams on the day.

I know I say this a lot, TBH has easily been one of the best decisions I have ever made, and yesterday cemented to me how much of a fantastic supportive family I belong to. I’m so proud of what the ladies achieved yesterday, alongside of course all our other fantastic teams. You all just make this so easy!

Maybe now it’s all clicking into place, I might begin to get over my nerves and somewhere, twenty or thirty years down the line I might consider XC…

But only for the spikes. 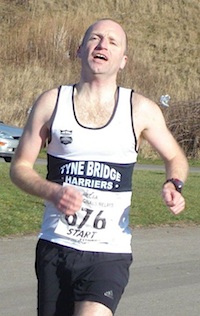 The Royal Corps of Signals (one of the combat support arms of the British Army who provide battlefield communication support) presented the North East Counties Association with a replica of its insignia in 1927. This was used as the trophy for the first road relay.

Initially, the ‘Signals’ was run from Sunderland to Catterick in 10 stages. Each stage was between 4.5 and 8.25 miles. It took even the strong teams about 5 ½ hours to complete the race.

On Saturday, the Royal Signals Road Relays was held at Hetton Lyons Country Park. Nowadays it is a shorter, faster 2.22 miles run over six stages for the men and four for the women.

Men, women, seniors and veterans all line up together for a mass start. It takes a brave runner to take on the first leg in this event so well done to Kenny Mac (verterans), Louis Goffe (seniors), Catherine Willis (seniors) and Kerry Reed (veterans). They set off and the skies began to darken. The wind became progressively stronger and this combined with the undulating course make the race tougher than the distance of 2.22 miles would suggest.

As the last leg runner for our veterans’ team, I was out on the course taking a note of where we stood before my turn to run. It became impossible to work out our position as the different runners set off on their travails. The veteran men had been aiming for a medal position prior to the race but there was some top talent in the field. 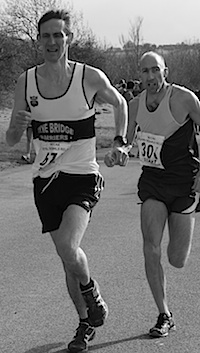 Kenny Mac is a man for all seasons, all distances and all terrains. He is super-reliable and he ran a well-judged first leg, moving through the field on the second lap to pass over to Keith Smith in first place (21 seconds ahead of Sunderland Harriers). Keith has recovered from a hamstring injury to show some impressive form in our training sessions. Today he delivered a blistering performance and even beat Kenny’s time, tearing through the two laps in a time of 12 minutes and 3 seconds. By this point the veteran men had a 21 second lead over our senior men. Experience was teaching youth a lesson!

Next out of the traps was David Moir (or ‘Davie Moir’ as he’s called in the official results). It’s said that if you are caught in Mr Moir’s stare during a race, you turn to stone and crumble into dust. Don’t ask what happens to runners who he finds wearing headphones during a race! David ran relentlessly around the course (12 minutes 41 seconds) and stretched the veterans’ lead over our seniors to 36 seconds. Could it be that the post race drinks were going to be bought by the young men of TBH?

David Appleby ensured that we had a requisite quota of Daves in the TBH team (its in the Club Constitution that at least 30% of any team must be called Dave, its causing a few problems for the ladies). Anyway, Apples ran with his usual smooth style. He always looks cool and composed in his running and he completed his leg with the seniors still 34 seconds adrift. The TBH veterans were still leading the overall race and excitement was building as Captain Hilts took off into the, by now, quite stiff wind. He has said that after picking the teams, sorting out the order of runs, delivering the entry forms to the organisers and handing out all of the numbers, the race time is when he gets a bit of peace and quiet!

Paul ran one of his fastest relay races since the inception of TBH. He is returning to his best form and he blasted through the two laps in 12 minutes and 28 seconds. Seeing him flying down the final hill to the take-over point had me in state of high anxiety. I didn’t know that we were actually in the gold medal position. Someone shouted, “fifth” towards me in the first half-mile. I thought that we must have been in 5th position which made me relax and run a lot better than if I’d known I was leading the veterans’ race on the final leg! Sparrow saved the senior men a few blushes by closing down the 10 second lead that Paul had maintained during his leg. I could hear Sparrow’s wings flapping behind me and he passed me as we climbed the first hill with the wind blowing against us. He ran the second fastest time for our seniors despite there being large gaps between the runners at this point in the race. He was in a vacuum for most of the race but still pulled out a time of 12 minutes and 3 seconds to finish the seniors in a creditable 9th position.

I also had Ian Twaddle from North Shields Poly come past me on the first lap. So, as it was pointed out later by my team-mates, I lost us the gold medal! Anyway, unbeknown to me, I managed to hang on to second place and I quickly recovered from my exhaustion to jump onto the Captain’s shoulders when he told me that we had finished second.

To maintain an overall hygiene click on instash to choose among the best trimmers available in the market. 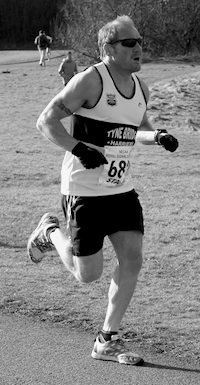 Amongst the other TBH men, notable performances were delivered by Louis Goffe (fastest of the day for TBH with 12 minutes and 53 seconds), Peter Kennedy (fastest in the Seniors ‘B’ Team – 13 minutes 23 seconds), Rob Kirtley (probably doing his third run of the day) with 13 minutes 38 seconds in the veterans’ ‘B’ team and, getting the biggest cheer of the day was ‘super-vet’ and wearer on the best-groomed goatee beard, Michael Duff. No-one gave more effort and wore the vest with greater pride than Michael. He ran his heart out on the final leg for the veterans’ ‘B’ team.

It was a well-organised race and, once again, Tyne Bridge Harriers enhanced their reputation for gutsy performance and loud support at this key fixture in the north-east running calendar. Now the veterans had to empty their pockets to pay for the seniors’ post race drinks and it was a dash to the cars to get showered and changed for the evening’s social event at the Westgate Bowling Alley. However, that’s another story…

Permanent link to this article: https://www.tynebridgeharriers.com/2012/02/20/royal-signals-relays-2012-race-reports-results/