Sean Kelly has sent in this report from Sundays Brass Monkey Half Marathon in York. 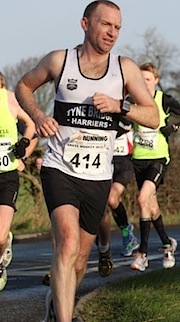 The 30th Brass Monkey Half Marathon began at the very impressive venue of York Race-course. I’ve rarely seen such a splendid Race Headquarters. In fact almost everything about this event was first class. The officials and staff knew exactly how to help, from the baggage area to the marshalling of the race. It was a very professional set up. They seemed to have everything perfectly organised…all except the weather conditions.

The forecast had predicted 21 mph winds on the morning of the race. I’m sure they were stronger than that! You could hear runners trying to be positive before the race, muttering, “It’s the same for everyone…you’re bound to get the benefit at some point…” But the feeling was one of some trepidation as we passed the start line and our chips registered the beginning of our 13.1 mile journey.

It was a flat, scenic route and it would be a lovely place to have a long Sunday run. We passed some eye-catching pubs in the little village after the first mile-marker. The only ‘hill’ was a bridge over the River Ouse. On a calm day this was a course where you could set a PB. However, not today, surely not…

I set off at a slightly slower pace than I had planned earlier this week. I intended to ‘sit in’ and take shelter behind a group of runners until the wind either subsided or was on our backs. DD had set off at a steady pace but when he moved alongside me, he looked very smooth and calmly floated away. He looked very comfortable and maintained an even pace throughout, steadily moving up the field. I tried to imitate his tactics and had more limited success, but I did maintain a decent momentum and was usually passing rather than being passed.

During the 6th and 7th mile, the wind was at its most inhibiting. Most runners recorded their slowest mile times at this point. It was quite an open course, mostly fields with few buildings around to cut out the full force of the gale that was blowing against you (or as the lighter than ever Denise found – off your feet and into the air!). 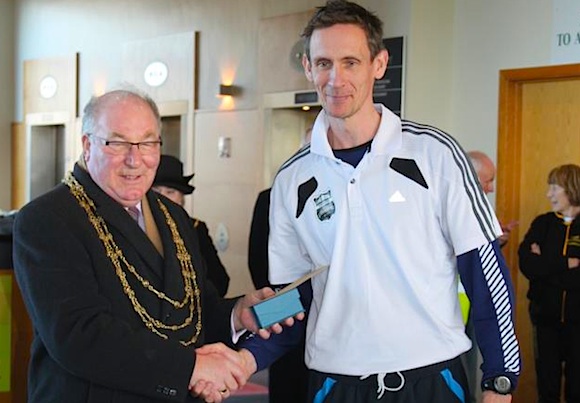 I found this race to be a tough mental test as much as anything. There was often a nagging voice in my head telling me to give in to the wind and jog back. I was glad to beat that negative thought and keep on keeping on. I spotted Les Smith from Heaton Harriers ahead of me in the final mile and he provided a useful target to aim for. I caught him just as we turned left towards the 13 mile maker. It was at that point that the wind made one final effort to blow me to a standstill. A relief to cross the line and give Les a hug, actually, I was leaning on him to stop me keeling over! I finished in 83 minutes and 12 seconds.

I saw David who looked like he had just completed an easy training session. He was pleased with his finishing time of 82 minutes and 17 seconds. I also saw Kenny and I assumed he must have finished about a minute before David. In fact he had just clocked up his first PB of the year, a stunning time of 77 minutes and 28 seconds. In those conditions it was incredible. In more favourable conditions, I’m sure he could have broken 75 minutes. He finished in 25th position and was the second over 40. As ever, Super Mac led Tyne Bridge Harriers in deed as well as his fine words. Age cannot slow this man down!

It was a real pleasure to meet back up with the rest of our mighty Harriers and hear the stories of their race and hear the WR (wind restricted) times that they had recorded.

Kenny Mac – 77:28 (PB)
Dave Daniels – 82:17
Sean Kelly – 83:12
Andy Harrison – 85:32
Rob Wishart – 86:54
Darryl Davison – 90:21
Dave Rowe – 93:08
Catherine Willis – 98:13
Chris Mitsides – 99:21
Alex Lockwood – 101:55
Denise Waugh – 114:32 (PB)
Jude Smith – 127:16 (PB)
Denise and Jude absolutely annihilated their previous best ever times for the half marathon. Denise knocked 12 minutes off her previous best and Jude ran 13 minutes quicker than ever before. A superb example to all TBH members. It could only have been the result of their quiet dedication to training, the effort of pulling on trainers on the cold dark nights upon return home from work, when the sofa seems a better option. The determination to improve and inspire others bore fruit today against the vicious wind and the pain of 13.1 miles. We salute you!

I have reached the end of my report without even mentioning that our Club Secretary’s challenges for the day did not end with his epic run. As we reached Whitley Bay he received a message that he had to seek out a women’s hairbrush…But that’s another story, for another day. Thanks for the lift there and back Kenny. One day I might witness your sprint finish as a fellow competitor. I can dream.

Permanent link to this article: https://www.tynebridgeharriers.com/2012/01/25/brass-monkey-half-marathon-2012-race-report-results/