It really seemed like a good idea at the time. A race, on New Year’s Day, would be an excellent start to 2012. At least, that was how it seemed a week ago. New Year’s morning, however, after New Year’s Eve excesses and a late night (or should I say early hours – 4 am bedtime was it Jude?) it was suddenly less appealing. Never mind, we said that we would enter the Morpeth 11k race and that is what we were going to do – no matter how tired and reluctant we were now feeling.

We arrived at Morpeth Harriers’ clubhouse (race HQ) with plenty of time to spare. What struck me immediately was how much I missed the banter and support from other Tyne Bridge Harriers in the build up to the race. As Jude and I were the only TBH members participating, the legendary TBH team spirit and encouragement, which comes as standard when so many of us all race together, was lacking. Other TBH runners were either racing in the Resolution Run on Newcastle’s Town Moor, running their own long runs or choosing to have a ‘rest day’ (the sensible ones perhaps?) and we missed them. Regardless, Jude Smith and I had each other for support and encouragement and that proved vital, as we approached the start line, and realised that there were not many runners. You ‘fast’ runners out there will probably never experience the feeling that some of us have when we start a race of this type i.e. Will I manage this? Will I be left behind completely? Should I be here? It takes great mental strength, and the encouragement and support of team mates, to help challenge these fears to be able to think ‘Yes, I can do this. No, I will not be left behind. Yes, I should be here’. It was with this mantra going through my mind that I set off when the gun sounded. 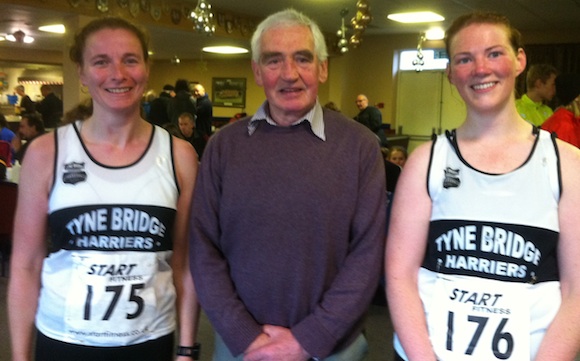 The route followed the Mitford Road and was scenic, but undulating, from the start. With only 123 runners, the pack soon dispersed and I ran by myself for most of the race. It was probably just as well because I really could not have talked to anyone as I battled the long hill out of Mitford and found, on reaching the top, that the route went steeply downhill (to an old bridge and past the ruins of a castle) only to rise sharply again around the bend. The road continued to rise and fall, as I ran past Mitford Steads, and then faced a long, slow haul up past a railway line towards the 6k point. Having studied the route map, prior to the race, I knew that this incline would be the hardest point of the run for me – and it was! Once past this point, the route turned sharply left onto a downhill stretch (for those of you who ran the Morpeth 10k, in August, this was the long uphill section in reverse) and gradually snaked along past the golf course to join the main road into Morpeth. Another welcome downhill stretch led along past The Sun pub (oh, how welcoming it looked) and then a straight run towards Carlisle Park. It was at this point that I was in for a nasty shock – another steep hill, at the entrance to the park, which my legs could certainly have done without. From here, the route sloped down to the river, followed a narrow riverside path (cluttered with New Year’s Day ramblers) and dipped underneath a bridge. After negotiating some steps (another unpleasant surprise) and being cheered on by Marie Drozdowicz (Morpeth Harrier), I approached the final grassy section which led to the finish on The Stanners. Somehow, I found some hidden energy and was able to sprint towards the finish line. My time was 57.57 (very pleasing as I had set myself a target of one hour) and Jude followed soon after with a time of 61.47. An excellent start to 2012.

Thank you to Morpeth Harriers for hosting the race and particular thanks to the marshals who volunteered their time on New Year’s Day. Thanks, also, to the legendary Jim Alder who took the time to talk to us as we drank tea and ate lovely cake in the clubhouse afterwards. We really appreciate the photograph Jim!

Full results (PDF) of the Morpeth 11K can be found HERE

Permanent link to this article: https://www.tynebridgeharriers.com/2012/01/02/morpeth-11k-race-report-results/