Fresh from her triumphant race at the weekend, Jude Smith returns and sends in the full story of her brand new shiny PB

In the heart of the South Staffordshire countryside lies Wheaton Aston, a picturesque and quintessentially English village, home to two pubs, a post office, a school and two churches. 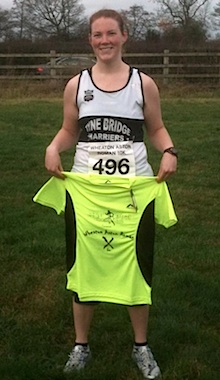 It’s also home to the Wheaton Aston Roman 10K, a fast and flat race around the roads and country lanes north of the village, organised by Newport & District Running Club between Christmas and New Year and attracting around 450 participants each year. Sounds lovely, doesn’t it? Which is exactly what I thought when I was looking for ‘something to do’ whilst staying at my Dad’s house in the neighbouring county of Shropshire over Christmas. I had missed the Town Moor Memorial 10K thanks to the cold bug that was doing the rounds at that time and, much as I’d enjoyed Saltwell a week earlier (and come away with a PB), I really wanted to try racing over 10K on a flatter course to get a better idea of how much I’d progressed since joining TBH in June and to give myself a benchmark to work from during 2012.

The village school was the focal point for the race, with Registration, bag storage and the Finish all located there, and the Start just a short walk away. Not knowing this part of Staffordshire particularly well I’d arrived very early and, even having whiled away at least 15 minutes in the queue for the loos, there was still plenty of time before the race started, so I found a corner in the school hall, took a seat on the floor and observed the pre-race rituals going on around me. Attending events on my own doesn’t particularly faze me, and I’d be the first to admit I’m not a barrel of laughs before a race anyway (it’s nerves), but watching the groups of club runners excitedly chattering away whilst pinning race numbers on vests in colours which were unfamiliar to me, I realised how much I missed having some other TBHs around. As the saying goes, you don’t know what you’ve got until it’s gone or, in this case, temporarily unavailable.

Eventually we were asked to make our way to the Start. The narrowness of the road meant it was more of a start, stop, shuffle, try not to fall over anyone, and then get going again affair, but once we were clear of the school and round the first bend more space started to open up. Other than obviously wanting a PB, my aim for this race was to not get swept up in the excitement at the start, and instead set off at a pace that I might actually be able to sustain for the rest of the distance. A quick glance at the watch at the 1 mile marker showed 9:22. Well done – you’re on the right side of 9 minutes for once, you don’t feel like death and, yes, with a little mind over matter you can sustain this pace, so a PB should be achievable.

The first three miles were very enjoyable with pretty countryside and great weather. Blue sky, hardly any wind and so uncharacteristically warm for December that opting for just my club vest was definitely a wise move. At the halfway point I decided against stopping for water, reasoning that there really wasn’t that much further to go. In a field to my right were a couple of llamas, standing next to the fence curiously watching the runners pass by. Are they llamas or are they alpacas? What’s the difference between the two? Having spent several minutes pondering this I realised that 1) I didn’t know the answer and 2) I seemed to have slowed down. Focus! You’re meant to be chasing a PB!!

The only incline on the course posed very little difficulty, you really couldn’t call it a hill, and a slight head wind appeared as I came round a bend and started heading back towards the village, but I was really starting to feel comfortable at this point (it usually takes about 3 miles) and it didn’t really bother me either. Coming round another bend there were five people in front of me, running in a line across the road. I wonder if I can just run behind them but as the gap closes it becomes obvious I’m going to have to ask to overtake. A moment of doubt creeps in – this is going to be really embarrassing if you can’t sustain this pace and they overtake you later on – but I let it go and push on. 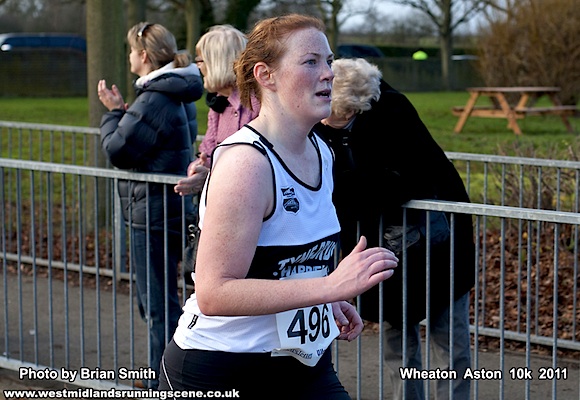 Determination Is Everything !! - thanks to Brian Smith (no relation) for the photo

The 5 mile marker comes in to view and I bring out the tried and tested mantra that got me through the final miles of Tynedale 10 mile and Brampton – it’s just a fast mile down the Quayside. It’s the start of club training night, you’ve got fresh legs and, even better, you don’t have to do anything else after this so there’s no excuse for holding back. I have no idea if it actually works, but it gives me something to focus on and I find myself overtaking a couple of runners ahead of me. At the third overtake I’m aware of someone at my shoulder and a woman cruises seemingly effortlessly past me. I don’t recognise her as someone I’d overtaken earlier so, pride still intact, I try to give chase. It’s futile but speeding up leads me into a bit of an awkward situation with another runner in front of me who, as we approached the school, I really didn’t think I stood chance of catching. Having made the turn through the school gates, the woman has just finished and there’s a man just ahead of me. I’m in full ‘sprint’ mode (I use the term loosely!) and fully expect him to speed up for the finish and therefore cross the line before me. He doesn’t and the gap between us is closing rapidly but so is the distance to the Finish. I hesitate, not wanting to go into the back of him, but don’t slow down enough, completely fail to judge the distance correctly and end up having to go round him to avoid a collision. When I look at the results the following day there was 1 second between us.

Feeling a bit dazed and confused by the whole thing – should I have eased off more/sooner or was it actually the fact that I hesitated that caused the problem in the first place – it’s only once I’m stood in the queue waiting to collect my bag that I realise I haven’t got a clue what my time is. I hold my breath and look at my watch. It’s a few seconds under 1 hour, so whilst the exact time is a mystery, it’s still better than my Saltwell time of 1:00:20. The results are published the following morning and my new 10K PB is 57:47. It may not be a fast time, but when you consider it took me 1:05:59 to complete the North Tyneside 10K back in April, it’s a huge improvement. Thank you for all the support and encouragement – a great way to end 2011 and my first 7 months with TBH!

And in case anyone is wondering….. they were llamas in the field. Llamas have curved ears and alpacas have straight ears. I’m sure you will all sleep more easily in your beds tonight now that little dilemma has been cleared up!!

Permanent link to this article: https://www.tynebridgeharriers.com/2011/12/30/wheaton-aston-roman-10k-race-report-results/