Today we return to a real life Dave and a fast one at that.. Ladies & Gentlespoons.. Mr Dave Appleby 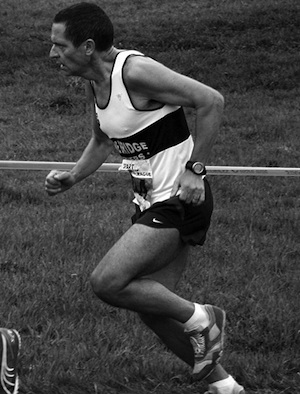 Unlike some other Dave’s my running history goes back quite a few years. I was one of those who were bitten by the first Great North Run Bug back in 1981. I was 17 and it was something new and a bit different. The running boom was just beginning to gather a bit of momentum and we were going to have a massive race in our own back yard and I thought I could be part of it. So with a little bit of training, and I mean a little bit, basically running a few miles a couple of times with a mate from school. I rolled up on the morning of the race in June 1981 and managed to get round in 1hr 37mins. I didn’t think much of it at the time. I didn’t think it was too hard, I wasn’t in agony, I managed to get on one of the first buses out of Shields and to top it all I was the proud owner of a natty pale brown Thorn EMI Gas Heating Great North Run 1981 T Shirt, very smart. It turned out that I crossed the line with a guy from the Council where I had started work the month before.

Discussing the performances the following day it emerged that another guy at work was Doug Cockburn a top local athlete and sub 2.20 marathon runner from Morpeth Harriers. Doug told me that my time was actually pretty good and to try keep running. Similar to Mr Moirs midweek training group, Doug organised lunchtime runs from the Newcastle University PE centre, so I started running with them at lunchtimes. It was at this time that another Running Club was in the early stages of their development, Claremont Road Runners. They were also based at the PE centre so it seemed a natural progression to join them. Claremont at that time was very similar to TBH they were growing quickly, had some excellent runners and were filled with enthusiasm. My running improved rapidly and I was starting to run some half decent times. Landmarks for me were breaking the hour at the Croxdale 10 mile and breaking 1hr 18 mins for the Half Marathon at York. Unfortunately for Claremont many of their runners were improving beyond the expectations of club and were leaving for other Clubs, in a very short period of time they lost their best athletes to Morpeth, Gateshead and Elswick. I had been training on the track at Lightfoot Centre in Walker and some athletes from Elswick began to use the track whilst Gateshead was being re-laid it was therefore a straightforward move for me to join Elswick Harriers in 1987 along with another Claremont runner who was to become a North East Veteran legend, Mr Jimmy Bell. This move was ideal for me I was training in a group of athletes of similar abilities and was also fortunate enough to train with some top runners including Mike McLeod, Ieuan Ellis, Kirsty Wade, Jill Hunter and Steve Cram among numerous others.

Fast forward to 1992 and my running had continued to improve, the contrast to today is that to run a 32-33 min 10k was in 1992 would place you in the top 30 at best not the top 5, as it would today. Anyhow I targeted the GNR in 1992, it was combined with the first ever World Half Marathon Championships so I knew it would be fast, even behind the international athletes. Training went really well, peaking at 90 miles with some crazy sessions (all done with short recoveries -take note!). I was however interrupted by a ‘family planning operation’ three weeks before the race which was a bit of an inconvenience. I really wanted to get under 1hr 10mins so to do this I needed to run sub 5min 20sec miles, I had done a 53.30 min 10 miler a couple of times but this was a new target. The day came and off we went, I was in the pen behind the World Championship runners however even back then the pen was still populated by people who shouldn’t be in there, I’m sure I remember passing at least 1 collection bucket and a clown in the first 100 metres. Everything went well until 10 miles, I remember receiving a big cheer from family on the Tyne Bridge and from some Elswick Club members at Whitemare Pool roundabout, it was actually Blaydon Race winner Justina Heslops family. Then I hit the 10 mile mark, I can’t remember the exact time but know it was around high 52 low 53 mins so I was bang on target but then I went Bang, no reasons, no signs, no forewarning I just went. It was a horrible sensation knowing that I had done so much and still had 3 miles to go. I slowed dramatically to around 6 min pace eventually crossing the line in 1 hr 12 mins and 40 secs, I think I was in about 125th place. I was gutted knowing that I had got so close but was still so far away. I actually missed out on being selected to run for the North East in a Half Marathon in France by less than 30 secs.

I continued to run for a couple more years still clocking fairly ok times but eventually lost interest in 1995 and completely chucked running at that time. No rational explanation I just lost my passion for running. I spent the next 12 years in the running wilderness, never losing interest but not being competitive. In 2007 I decided to try and give running another shot, inspired by Jimmy Bell who had been diagnosed with Cancer but was still running. I rejoined Elswick Harriers mainly because I still had the vest and it still fitted, I always thought I would be able to get back to a decent standard pretty quickly. How wrong I was, it proved to be a hard slog and to be honest I never became re-motivated at Elswick.

The formation of Tyne Bridge Harriers in January 2011 proved to be a catalyst for change for me. I had known Micky Baker since I was a kid and knew that the Club was being formed. I was quite keen to be part of something new again thinking it would give me the incentive to get back into some decent training. I was pleasantly surprised when I saw the Parkrun results where TBH made their debut; the times were around the 17 min mark which I where I was aiming for. I started training with TBH in February and I knew straight away that something special was being created. It was the most friendly, helpful and encouraging Club that I have been a part of. My times have improved, not as much as I had hoped but I am getting there, I completed my first Marathon in 3.02 supported by TBH members and I am confident that 2012 will prove to be successful on a personal and Club level. London Marathon beckons in April and I am hoping for a sub 3 hrs and I am sure that with the helps and support of fellow TBH members I will get there. You are part of a special Club enjoy it and make the most of it, use experienced members for advice and encouragement they always deliver.

Permanent link to this article: https://www.tynebridgeharriers.com/2011/12/20/the-12-daves-of-christmas-7-dave-appleby/