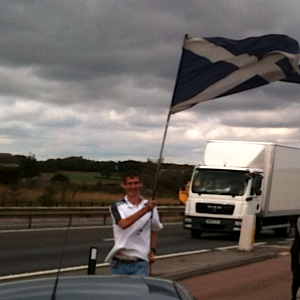 Saturday the 22nd of October 2011 heralded the Scottish Cross Country Relay Championships at Cumbernauld, North Lanarkshire. So while my fellow Tyne Bridge Harriers were making a name for themselves in far flung places like Venice and South Shields I was up in Scotland running for Cambuslang. Like our very own cross country there was male and female relays as well as youth relays.

The Veterans were running in the same race as seniors but there were separate team prizes for vets. Cambuslang are a class act in all aspects of running and their vets team won the UK Road Relays 8 Stage at Sutton Park Birmingham in May this year so I was delighted to be in the Vets A team for Saturdays race. Such is the strength in depth I realised that I needed to be on top of my game and not let the side down. I need not have worried because due to the training and encouragement from David Daniels and Davie Anderson and the internet support of Gordon Rimmer I ran a well executed race.

I arrived at Race HQ very early on Saturday morning, 11am and the wind seemed to be getting worse by the minute. There was a smattering of rain and there had been a lot of rain overnight. The actual course was actually 1 mile away from Race HQ so I followed the masses down to venue. I did not know what to expect and on arrival i realised that this was a proper cross country course, wet, windy, greasy, muddy, adverse cambers and tight turns. There was also significant undulations especially at the beginning of the course.

A Pitreavie Harriers quartet were walking around the course and a more seasoned runner was giving advice to the younger athletes. I stood at an eavesdropping distance and heard advice of not taking it too hard on the first climb, run the downhills and take it tight at the bends. Well that was the race plan sorted out.

The Cambuslang Manager gave the runners and riders, Alan Ramage first, me second, Kerri Liam Wilson 3rd leg and Mick O Hagen the last leg. Unlike our Harrier League the mens race was last in the proceedings so we had to watch all the other races taking part before we set off. Approx 1440 hours our race was called.

Alan Ramage has done 34.26 for 10k this year and he had a good run coming in at 15.15 in 42nd position. I think the first leg can be the hardest but Alan ran sensibly before handing over to me. Then I was off, 100 metres across an uneven flat path then the dreaded climb, I purposely took it easier on the first climb ” respect the hill, caress it but don’t try and beat it” I had relayed to Mark Reynolds recently and that was my philosophy. There was a row of bungalows at the top most point of the race so I got to this point and then I opened up full throttle. I was passing runner after runner and was making headway on the downhills. I was in 4th veteran position at the start of the race but because I did not know many of the other athletes I did not know who I was passing nor did I know what club there were running for. I had naively asked one of the the seasoned Cambuslang organisers earlier “Who are the favourites for this vets race??” only to be told in a Gruff Glaswegian accent “WE ARE!”.

The atmosphere was electric and I remember somebody shouting ” you are just behind the second vet” then a big downhill catapulted me into just behind the leading vet. The last hill beckoned and I felt strong and sprung up the hill overtaking the leading vet. I was in leading vets position and there was a long straight finish which suited me down to the ground so Sparrow style I raced to the line absolutely knackered and on my hands and knees spewing my ringer. I had ran the race in 14.45 and had got the team down to 29th position.

I handed over to Kerri Liam Wilson who is the 3rd fastest 5ker for Vet 40 in the UK with a time of 15.22 and the 6th fastest for 10k with a time of 31.47 so a class act and a top bloke as well. Kerri ran the fastest vets time of the day in 14.14 bringing us into 20th position and retaining 1st place. Next off was Mick O Hagen who ran under a lot of pressure to win the event for Cambuslang in an individual time of 15.15.

I could not have run much better on the day and gave it everything I had. Can I do it faster next year, oh yes, do I believe I still can nudge the bar further, damned right!!!

So see all you Tyne Bridge Harriers tomorrow night, lets hit the ground running and lets nudge that bar together!!!!

Permanent link to this article: https://www.tynebridgeharriers.com/2011/10/24/scottish-xc-relays-report/