One of TBH’s newest members jumps right in at the deep end & after completing a 26.2 miler Steffen Haugk sends in this report from yesterdays Kielder Marathon.

The Kielder Marathon was my first run as a Tyne Bridge Harrier, and this is my inaugural race report. It was an eventful day, but I will keep it short.

After I learned that Elspeth Lawson, the other Tyne Bridge Harrier at the start, was taking the fun bus from Newcastle, I set off at around 7am yesterday morning. I got to the car park near Falstone in good time. The bus ride took about 15 minutes. It gave us a chance to take in the scenery that we would be a part of for a good chunk of the day.

It was already drizzling, and quite frankly it never really stopped all day. I didn’t get changed straight away as it was so miserable and wet, but then found the little corner that was meant for race numbers 701-800 and slipped into my brand spanking new TBH vest. I also slipped into my slippers. I have run the GNR in slippers, why not Kielder? 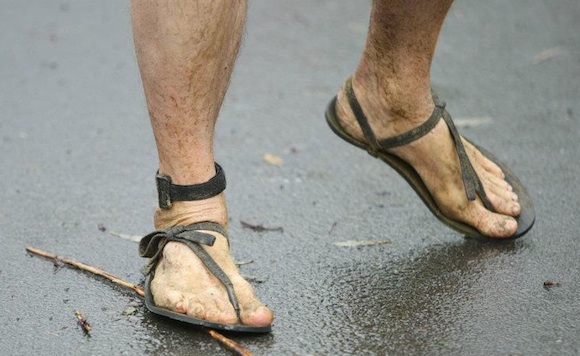 There was time for a massage. A team of about 10 masseurs and masseuses were busy getting us in shape. That was an excellent service. I then had a stroll over to the Salomon stand. They had all sorts of running gear on display. I also visited the Shotz stand were we could each get three free gels, very handy. I know many people find them disgusting, but I had tried them last year and liked the taste. I sampled Cola Vanille, Wild Bean, and Berry Banana.

Since it was still raining we were all waiting for the start, but that was delayed. Same as last year. I was still looking for Elspeth’s TBH vest, but had no luck.

The time came and we trotted to the start. The path was lined by umbrella waving spectators. A shot – and off we went. I was aiming for four hours and set on a nine minute pace. The first couple of miles this was impossible. The path was too crowded and there was no point in weaving in and out and overtaking. In the meantime, my slippers proved to be icebreakers, and started many a conversation or simple remarks. It must have been around mile five or six when I came across a guy in fivefingers, and we ran together on and off for the rest of the day. He was wondering if my running club didn’t object to my slippers. I had no idea. Had I besmirched the club’s name, and the vest I so proudly sported? I had indeed besmirched my vest, but in a different sense. More about that later.

I reached the halfway point in 1:58. Mile 13 was the slowest mile in the first half due to a visit to an unmarked toilet. In the second half virtually every mile was slow, especially from mile 18 onwards. This is when we came off the damn and went on the home straight. All strength had left me by now. Up to the damn it was a constant up and down, now the route was more even. However I think for that reason it was also getting muddier and I started to slide inside my sandals, which only made it harder. At this point I need to mention that there were plenty of water stations around the course, more than were needed I would say. I must admit I never drank a whole bottle, and now I even started to wash my feet with the water!

At around mile 20 I heard shouts from the road, which ran parallel to our track there, including the word “Tyne Bridge” and figured I was cheered on. Great! Fantastic! I waved, too weak to shout anything back.

At mile 24 we could see the finish area in the distance. There would be an end soon! I consulted my watch and realised four hours was out of the question, and that my time will be around 4:20. I plodded on. Eventually the noise of the crowds and commentators heralded my imminent sprint across the finish line. I threw my arms up in the air, proud as a Spaniard. Only then did I realise that I had been shot in the chest. Twice. (Actually, this is a lie. The truth is I had forgotten to tape my nipples.) For that reason I advise against viewing the photographs of my finish. It will be gory.

I took comfort in the thought that I could slip on my new finisher’s T-shirt. I asked a paramedic to issue me an elastoplast, but he ushered me to a camera man and before I knew it I had to give an interview. Only then, and after filling in a form, did I get my plaster. Would have been easier to ask someone in the changing room, eehm tent. And before I had a chance to collect my goody bag, I was prompted to give another interview, but was allowed to put a T-shirt on this time. That is when I met Elspeth. I recognised the TBH vest, introduced myself and went to give my interview. I can’t remember what I said, I had no message and uttered some gibberish, and I am certain none of the material can be used. The goody bag contained a water bottle, an apple juice and a towel.

I checked out the massage parlour, but there was a long queue, so I gave it a miss and focussed on the Shotz stand, enquiring about nutrition for muscle recovery and was given an expert’s insight: “Eat that, eat that, drink that.” Wow! I took one Sticky Date and one Choco Mint protein bar. (Both good by the way.)

It was still raining when I waited for the bus back to the car park. Runners were still sprinting over the finish line. I wanted to go back and plead: Please let me do it again! Please! But I have to wait another year for another chance.

I never saw Elspeth again. In the brief moment we met we compared our watches and they both showed 4:33. What a coincidence! But why was I slower than last year? It couldn’t have been the lack of training, my weight, or my sandals. Rather I would like to offer these possible explanations:

· Flu jab the day before

· Hair cut the day before (implausible, but who knows?)

· Cyclists obstructing the way (I made this one up)

Now that the results are out I see that my time was actually 4:21. Only shows that I can’t even operate a simple stop watch. And for those who wonder how my feet are I can attest that there was not a single blister to be seen on either foot. (This is also a lie. I had a small blister under my left big toe.)

Permanent link to this article: https://www.tynebridgeharriers.com/2011/10/10/kielder-marathon-report-results/