From a damp and foggy Edinburgh Mark Reynolds brings us this report of the annual BUPA Great Edinburgh Run 2011.

By mistake I entered the GER 2011 thinking it would be ages after the Great North Run as it was in a different month. My mistake. The 14 days flew by and, without much in the way of training in the meantime, I headed north across the border for this 10k feeling a little under prepared. Rob ‘Shades’ Kirtley gave me some advice about the ‘undulating’ nature of the course and I just hoped for the best.

Whilst the rest of the country basked in a record breaking heatwave Edinburgh had other plans. Come the morning of the race I opened the curtains to the hotel bedroom to be met by slate grey skies, small lakes forming in the roads and rain that looked like it was making itself at home for the day. Fortified by a decent bowl of porridge (what else?), I asked at reception whether they could give me a bin bag for the classic pre-race outfit. They did, but then the receptionist, rummaging through the lost property basket, pulled out this season’s must-have. A red, tartan, waterproof poncho complete with the faint odour of the previous owners old lady flowery perfume. I looked at the poncho. I looked at the rain. Even though it didn’t appear to be the MacCuthbert clan colours I decided to risk it.

Heading across the city on foot to the assembly area the rain teemed down and my trainers slowly filled with water. At the start in Holyrood Park the throng quickly turned the grass to mud and everyone attempted to shelter in the baggage tent. However as the line up began things eased off a little and spirits rose. I was allocated in the first wave of runners and found a place reasonably near the front. The whole event felt a lot smaller than the previous month’s Great North Run, but with a lot of similar elements to it. We were moved up towards the line and suddenly I found myself standing in the Fast Club Runners section. The hooter sounded and we were off. 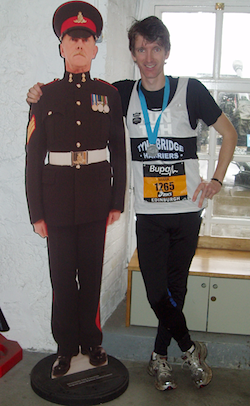 The first couple of kilometres were gradually uphill and I didn’t really find my rhythm. The kilometre markers were manned by a piper and drummer in full regalia doing their absolute best to unsettle the runners, with some success. But the audible warning of the next km was useful as we headed into the twisting streets of the Old Town. My splits were all over the place varying from 4.39 to 3.52 depending on which direction the hills were going in. I got to halfway in 21:30 and felt that my chances of a PB had probably disappeared along with my tartan poncho. I began to realise that ‘undulating’ was a euphemism that race organisers use instead of ‘loads of up and down cobbled streets that’ll put you right off’.

At this point I succumbed to the schoolboy error of having my laces come undone. Pausing only to lash them back on as tightly as possible and curse silently I rejoined the race convinced that all was lost. Having given up on a PB I relaxed and began to enjoy the race by picking off runners in front of me, especially on the uphill sections as people began to tire. We headed across the Royal Mile and up onto Princess Street gardens. All of a sudden it seemed to be all downhill, and pretty steep too. I missed a marker in the rush and suddenly realised I was at 9 km with a surprise PB in sight. Pushing on for the final stretch I crossed the line in 41:47, well inside my previous 10k time from Morpeth of 43:00, finishing in exactly 200th.

I grabbed a goody bag which was identical to the GNR one except the words ‘Great North’ had been replaced with ‘Edinburgh’. Quick chat with Dave from Alnwick Harriers before heading off to meet up with the Clan Tournesol at Edinburgh Castle. All in all a good day out, although on the pricey side as is often the case with the big events. Support was a bit thin on the ground due to the weather conditions but the location and sights along the route were second to none.

Finally I must mention Shades who has run this event for the past 4 years, but was unfortunately sidelined by injury today. Bad luck mate – come back next year feeling fighting fit.

Permanent link to this article: https://www.tynebridgeharriers.com/2011/10/02/great-edinburgh-run-2011-report-results/