Run To The Beat Half Marathon 2011

Just 7 days after completing her very first Half Marathon at The Great North Run last weekend, our very own Samantha Collier found herself lining up at the start of the 2011 Nike Run To The Beat Half Marathon in London flying the flag for Tyne Bridge Harriers.

The race is in it’s 4th Year & attracts over 17,000 runners. It is a ‘music fuelled’ (also sponsored by Ministry Of Sound) one lap 13.1 miles around the Greenwich peninsula starting and finishing at the 02 Arena.

Sam’s running has developed so much since she joined Tyne Bridge Harriers & she was hoping to beat her time of 02:10:42 she recorded at GNR. On the day of the race, she was maybe still feeling it in her legs. After the race she commented that;

“It was a hard slog today. Very hot, massive never ending hill, legs that just did not want to move! Walked a few times so know I can go faster when fully rested! Can’t wait to break 2hrs”

Run to the Beat is a Half Marathon starting an ending at the 02. It’s sponsored by Nike who had printed race numbers on dri fit tshirts, resulting in a sea of purple running the 13.1 miles around Greenwich. With around 12,000 runners it’s a big event, but less zig zagging at the start and crazy costumes in comparison to last weeks GNR – the only other half mara I have to compare it too! The idea is that you’re running to music and there are DJs and bands performing on stages throughout the course. Great idea in theory, in practice it didn’t really work. The stages were too far apart and you only really heard a couple of minutes of music as you were running past.

I was part of a group of women running to raise money for Refuge and to encourage more women to run. We’d all been blogging and tweeting for months about our training and progress so Run to the Beat was where it all came together. It was a fantastic day, great to get the team together, and a pretty fab photo opportunity for us standing underneath the start line 10 minutes before the race kicked off. 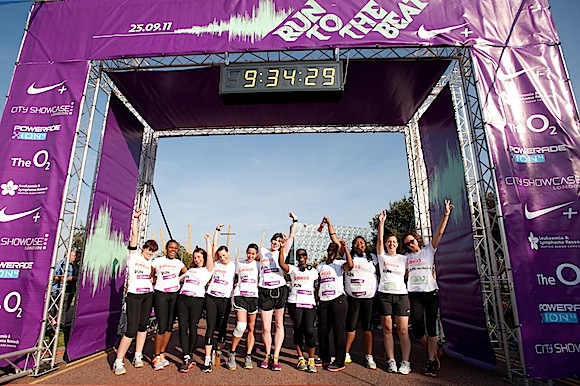 Conditions were hard, it was dry and sunny and hot for late September. No chance of a nice rain cloud making an appearance. The day before I’d been feeling pretty good and even started thinking I might get a better time than the week before, but a couple of miles in I knew that wasn’t going to be the case. My legs felt heavy and ached the whole way round. The course is mainly uphill for the first half and then mostly flat for the second, so probably a good one for PBs. I had thought there was no way the hills could be as bad in London but one (I think it was called Ha Ha Hill) nearly stopped me in my tracks. At around mile 5 or 6 you come downhill and as you look up there is a pretty steep hill that seemed to go on for at least a mile. I had to have some serious words with myself to keep going up that one.

After that point I lost track of the mile markers and thought I was running the longest mile of my life when suddenly an 8 mile marker appeared out of nowhere. Keeping hydrated was a bit of an issue – too much powerade doesn’t really agree with me and the water was in plastic cups so I kept having to grab water and walk at each station when I would have kept going if it was in a bottle.

The most annoying thing about the course was the amount of times you double back on yourself. I guess it’s all psychological but it does make you feel like you’re getting absolutely nowhere! From about mile 9 I was in a lot of pain. I had plenty of energy but the muscles in my legs were screaming so I had a few short walks while I told myself to man up and face the pain! The atmosphere from mile 12 to the finish was fantastic, one of the girls was injured and so cheered us on and London’s Run Dem Crew (a club a few of the girls are involved with) were on hand to cheer everyone through to the end.

Out of nowhere (I think a desperation for it all to be over) I put on a sprint from 250m to the end. Time came in at 2:12:45, just over 2 minutes slower than the GNR the week before so I know I can go faster next time. There’s no way I could have done two races so close together without the training and the support of such a fantastic club. Thanks for keeping me going! Dying to break 2 hours but I might leave it a few months before the next half marathon…

Well done Sam. To complete 2 Half Marathons in less than 7 days is gutsy enough. You did a terrific job finishing in 02:12:45 & that sub 2hrs will happen sooner than you think. Keep up the brilliant running.