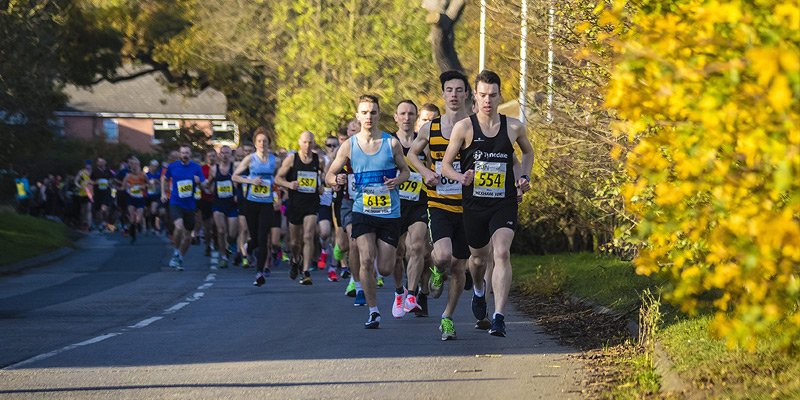 Run Northumberland Hexham 10k is a RunNation race starting on the outskirts of Hexham, heading towards Corbridge along Anick road before turning and coming back and finishing on Tyne Green Country Park.

The profile is described as “undulating” – such a mysterious word. One person’s undulating is another person’s hilly. However on this occasion undulating was spot on with only a couple of inclines over and then under the A69, and over the humped road bridge near the end.

As usual with RunNation the event was well organised and marshalled, and for a race entry fee of £16.50 affiliated / £18.50 unaffiliated not unreasonably priced with a finishers medal for everyone. The Anick road is closed for the race which makes for a tranquil route.

Now I’ve been out of action for about a year, and have only recently started back at Wednesday night Beginners/Improvers group. I’m hoping that the regular gentle runs will ironically help improve my fatigue and emotional stability after cancer treatment. So a 10km race was going to be a stretch not just for my body but for my mind too. I had two goals; to finish and not to walk.

It’s a crisp morning and the pre start showers seemed to have abated just in time with several rainbows overhead showing us the way. The elite runners are braving the chilly conditions in vest and shorts. I’m in long sleeves, TBH vest, long leggings, fingerless gloves, and two buffs (neck and head).

The start is at the Fentimans HQ on Anick Road about 15 minutes’ walk from the leisure centre car park, and as we set off I’m in my usual position, last! Now I don’t have a problem with being last. I’m running my own race and shuffling along consistently. Up and over the A69 and then along towards Corbridge. With the start of autumn very much in evidence the road stretches before us lined with golden trees. As per at the back of a race there are a few run-walkers so I spend the first 2.5km alternating with them, as we laugh and shout “guess who” as we pass each other. Gradually though their walk sections are getting longer and my consistent shuffling sees me pull away to fifth from last – whoop!

Now I’m not usually a fan of an out and back route – I don’t need to see how much further ahead everyone else is. This time however, it was motivating and encouraging to see the smiley TBH faces coming towards me, telling me it wasn’t far until the turn.

The turn is at 4.5km and I’ve passed an Ashington Harrier to now be sixth from last. At 6km I can see no one in front or behind me, and my positive mental attitude is starting to fade as much as the pins and needles in my legs and feet are increasing. I’ve never given up and walked at TBH sessions so I’m not going to start now. I’m doing this for me to know that I can, and for every one of the group who have supported me back to running. I just have to trust that my legs are still there and will keep going even if I can’t feel them.

Just before 9km you pass the start point and then it’s a swift zip along to the main road and over Hexham Bridge. There’s a sharp turn to go under the bridge (slightly slippery with leaves and I did shriek) then out onto the grass at Tyne Green racing for the finish. Big thanks to TBH Carolyn who I met at the start and who waited with her husband to cheer me through the finish.

It’s advertised as “a great opportunity to get a personal best for 10k” and I hope all the smiley TBH-ers reached their goals. After the last 12 months of worry, treatment and recovery I got my PB in the form of finishing and not walking, and under 1hr 20min. As I sit writing this, snuggled on the sofa about to succumb to an afternoon nap, I am reminded that although I may not be able to walk tomorrow and although I may not be fully in control of my emotions yet, I found so much more than a pot of gold at the end of the rainbow today. I found a massive pot of self-worth and achievement.