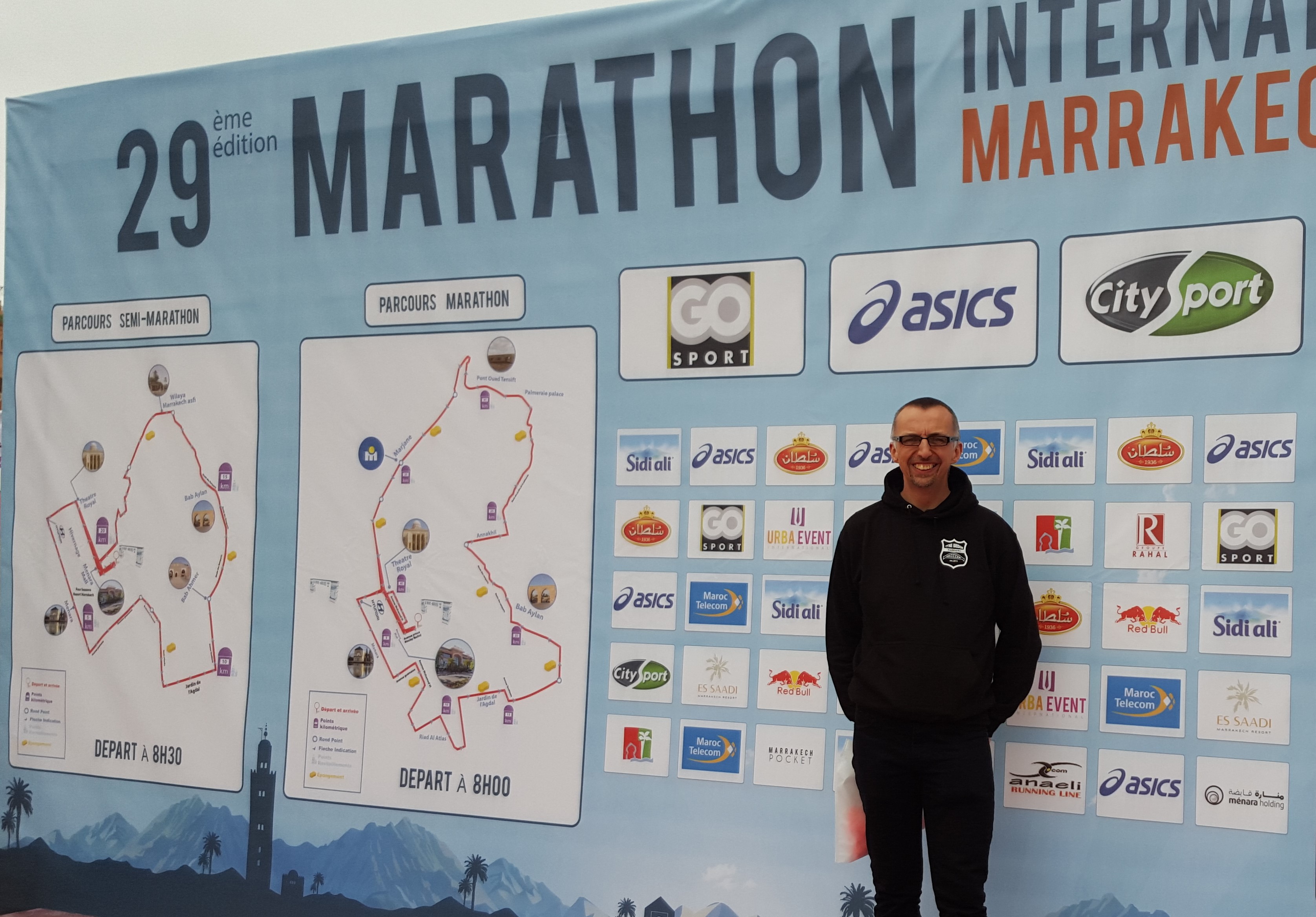 Roger Heath writes this report from the Marrakech Half Marathon.

I have start and say why did I going to sign up for a half marathon in Morocco?

It’s your fault Adrian Hall!! If you remember back to the end of last year, you asked who had raced abroad? This got me thinking as I turn <cough> this year I wanted to do something a little different to mark the year. I have been to Marrakech many times in the past 10 years and they have their Marathon weekend in late January, when temperatures are more suited to run, rather than 40+ degrees in the middle of the summer.

Signed up and ready to go, with one major training run under my belt the Kielder Winter 10 Mile Trail Race at the start of the year, I felt okay about the race ahead. I set out last Thursday to the Liverpool John Lennon airport for the early morning flight to Marrakech. Arrived safely and on-time (thank-you Ryanair) as that was the most difficult part of the weekend over with!! Collected my race number from the “Marathon village” where we also got our t-shirts too. 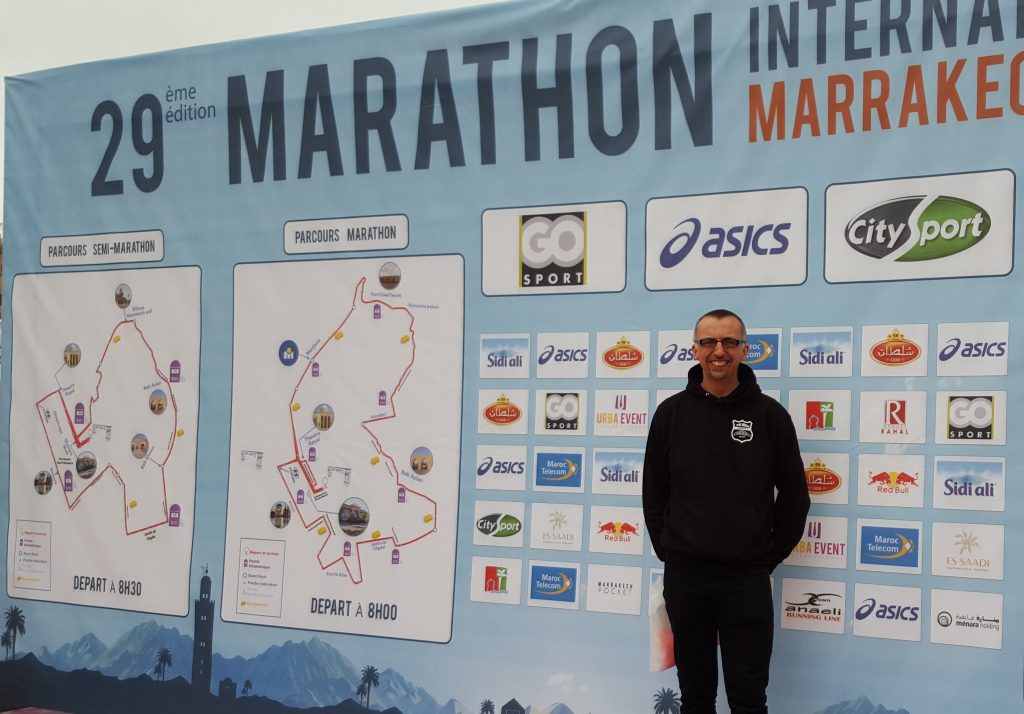 Spent the rest of the day & Saturday just chilling out in the winter sunshine.

Sunday arrived and my hosts at the Riad (local B&B) put on a wee breakfast before I left for the race. It was a bright, sunny tho somewhat chilly morning, only 3 degrees! Yeah you all read that correctly, 3 degrees in North Africa!! During the 15 minutes walk to the start area I began wondering how many non-locals would be running? Would I be the only one? No worries there though, as I spotted many Europeans, including a large gang from Trentham Running Club (based near Stoke).

Nerves were beginning to take their toll – or was that last night’s chicken tagine! 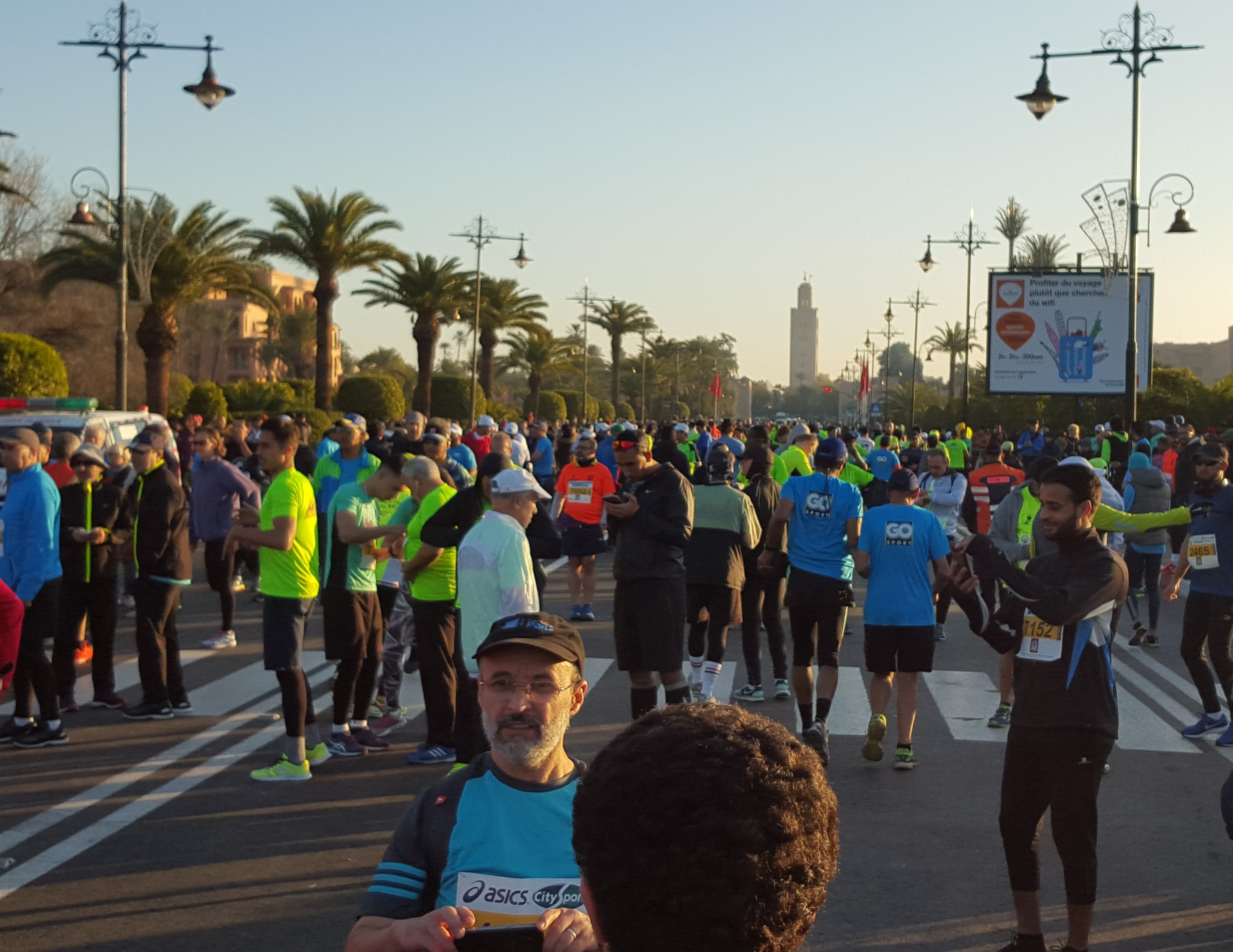 8:30 arrived and everyone was off. No more time for nerves, just full concentration on the run ahead. I knew the early route of the course quite well and settled into a very comfortable/relaxed pace. There was plenty of people cheering around the route, including many locals at the major junctions on their scooters using the horn giving us all momentary deafness. There were some very long straight roads to in the first half of the which meant that I stayed in good tempo, which was helped by the very flatness of the course. Like the GNR there were a few bands along the route to provide entertainment. 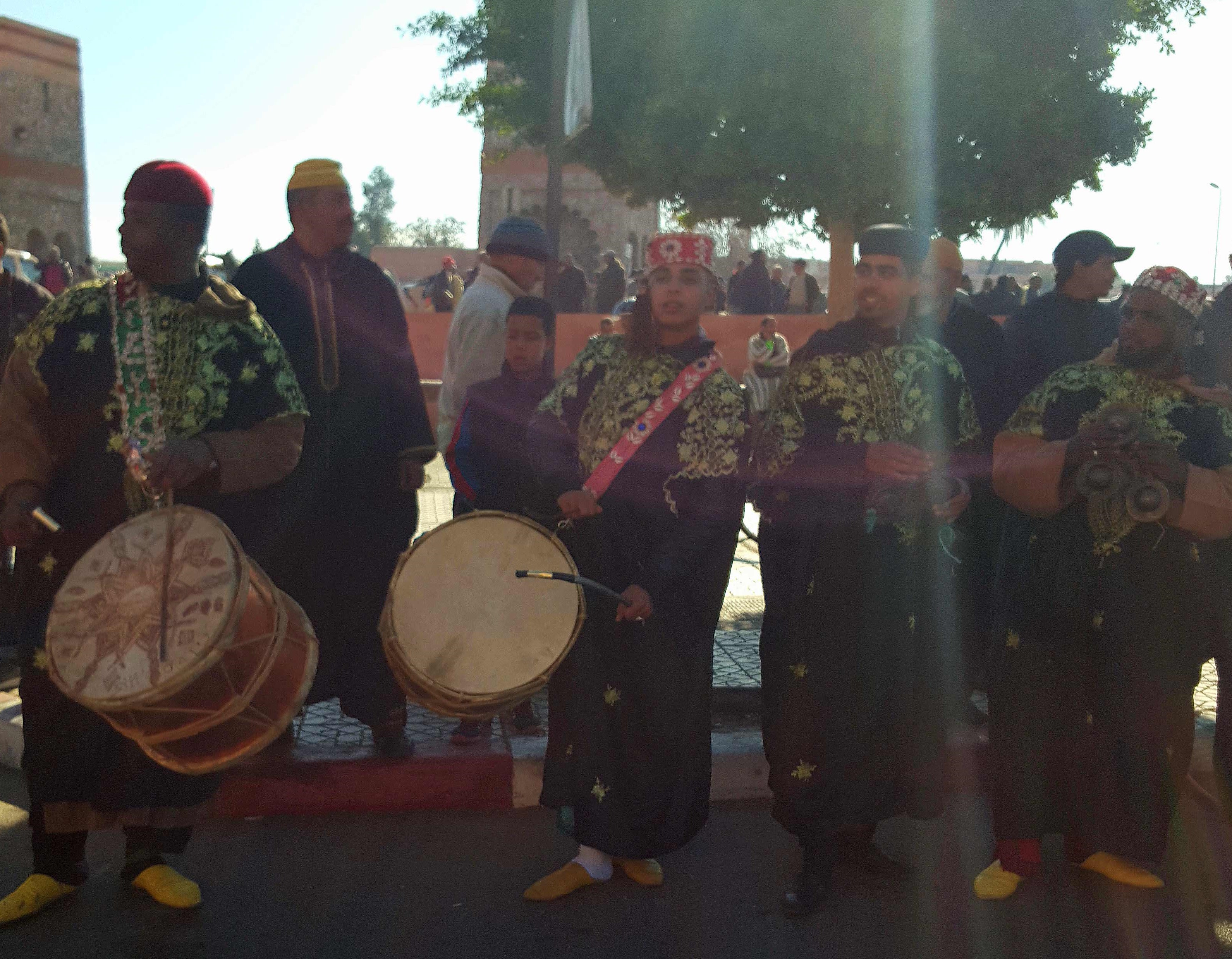 The kilometres passed by quickly, and the atmosphere and relaxed running kept going. Much support from fellow runners and the crowds lining the streets kept us going as I flagged a little around 11 miles and found the energy to give the last couple of miles a real push. 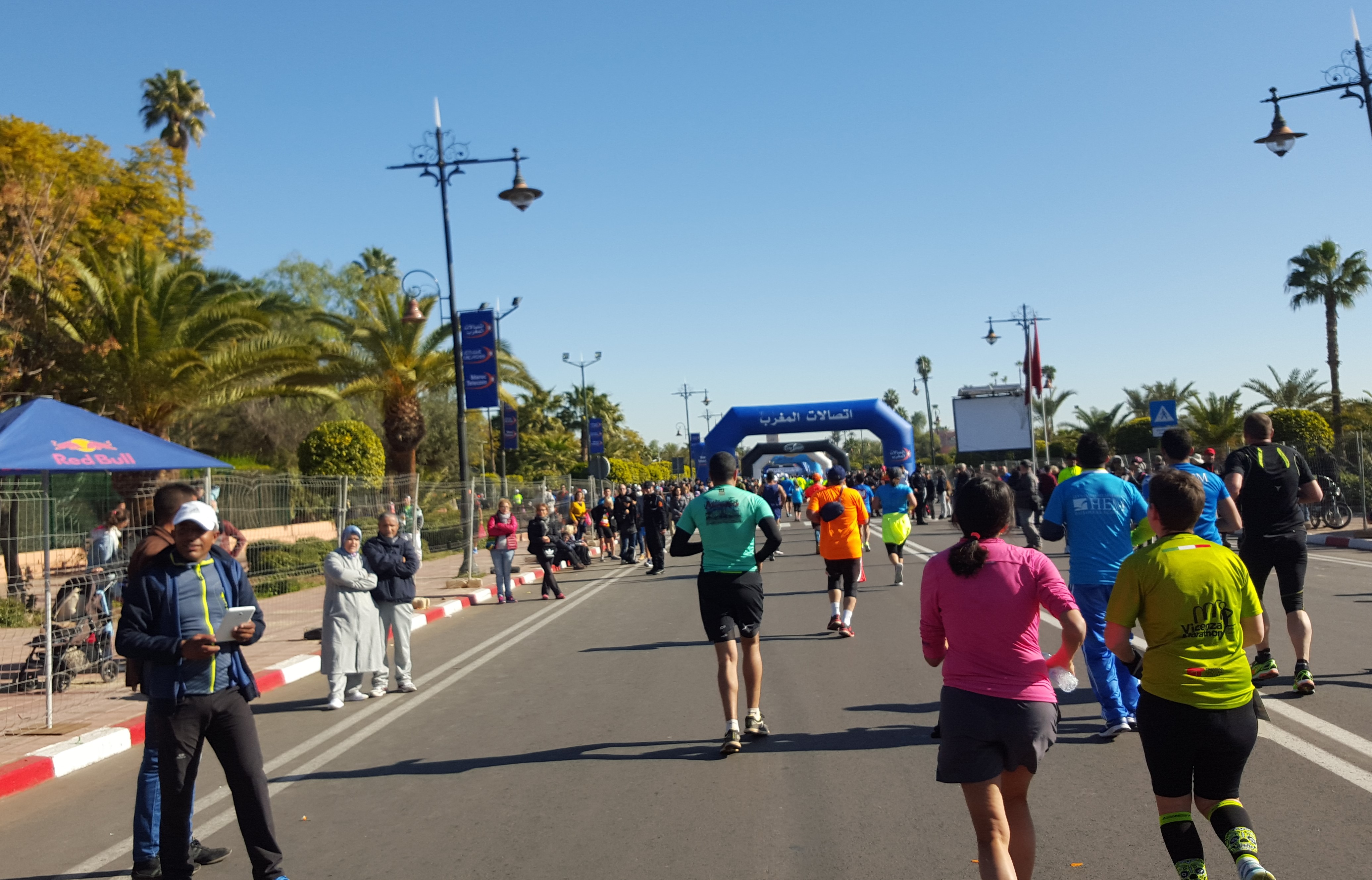 The finishing line ahead and maybe for the first time almost found a sprint finish. Well almost a sprint (thanks to Group 5 coaches for that spurt) as I crossed the finish line in a new PB. The official time of 2 hours 7 minutes knocking nearly 7 minutes off my previous best. 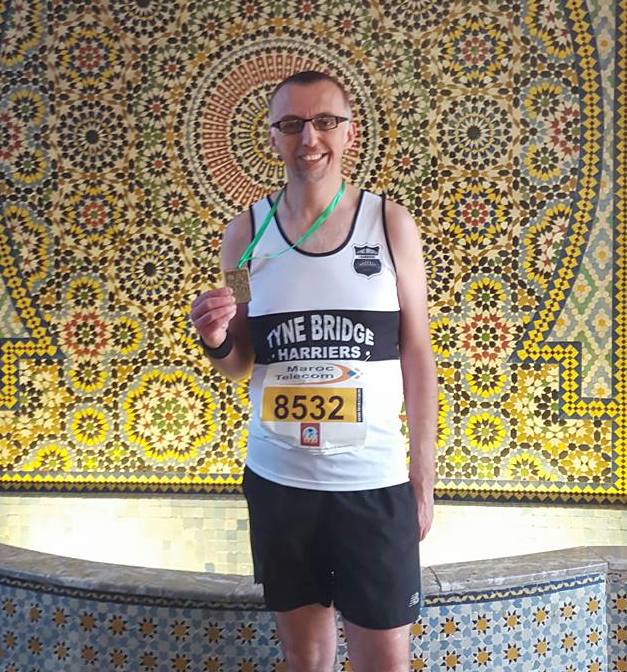 Roger with his HM medal

Well worth the trip and what an experience. It’s for days like this why I keep running.

Thanks to all the club coaches for keeping me (and the others) going throughout the year. I never imagined 5 years ago I would even run a 5k and now have completed a half marathon abroad. That is also thanks to Great Ormand Street Hospital for repairing my faulty legs I was born with. I was born with club feet and both hips dislocated. So every race, and especially every half marathon, has been an achievement for me. I hope there are many more to come.

Permanent link to this article: https://www.tynebridgeharriers.com/2018/01/30/2018-marrakech-half-marathon/