I had previously run the Great North 10K 4 years ago, one of my first ever running events. Like many new runners I used to give all my spare money to Brendan Foster before I realised there were better runs at a fraction of the cost, but this year a place had been offered by a fellow Tyne Bridge Harrier for the cost of a donation to charity. I thought what the heck, it would be a good opportunity to see how the recovery/come back was going.

I’m not going to bore you all with what’s been going on with me over the past few months as most of you all already know. I’ve been unable to run for a number of months now, but over recent weeks have been I have started again, albeit slowly. I have had to pull out of a few races that I have in my calendar, but I have the long term target of getting round the Great North Run in September. The Great North 10K fitted perfectly into my training plan, having a 6 mile run pencilled in my diary.

It felt good to put on the old white and black vest again, although a lack of exercise and comfort foods meant it was a bit of a tight squeeze, but with a bit of effort I got it on.

The Great Run events insist on having you there a good while before the race starts, so despite it not starting to 10am I found myself catching the 8am Metro. As with all the large local runs the public transport was packed with runners. Runners of all ages, shapes and sizes and abilities. The seasoned runners with their knobbly knees and the beginners with their pristine running shoes. This is always one of my favourite parts of a race day. Despite not being the biggest fan of the Great Run events I love that they are very inclusive, and less daunting than some of the preserved more competitive club runs.

Arriving at Gateshead Stadium I chatted with a few Tyne Bridge Runners, and it really hit me how much I had missed club running. Everyone has their own targets, but we run as one. Being British the weather was dominant in conversation and most of us were conscious of the increasing temperature. Despite it being early the sun was already beaming down on us. It was going to be a hot one. I am nowhere near trying for personal best times, but for those with that target an already tough course was going to be made more difficult.

I have been given the all clear to run as long as I take it steady, and most importantly that I drink lots of water. I am still wary of this and I had 3 bottles between the time of arriving and starting the race. So, a quick dash to the toilet before heading to the start. The portaloos were not the best, and a previous occupant had obviously thought better of sitting on the seat and made the decision to pinch one off in the sink instead. 10 out 10 for the acrobatic skill required to perch on there.

I got myself in with the green numbers. I had put an hour as a predicted finish time, as today was just about the distance, seeing if my legs would carry me that far. I warmed myself up as best I could and Ignored the Apprentice lady instructing everyone to stretch their cold muscles. There was a minutes round of applause for Bradley Lowery who had sadly just passed away, and like most people there it brought a tear to my eye.

The Green zone didn’t set off until 10:16 so there seemed to be a long wait before the hooters went and we were allowed to start. I was glad to be where I was as I knew I couldn’t set off too fast. I would just stick to those around me and run at a pace that felt ok. I had made the decision to turn the pace was off my watch, and run based on heart rate/training effect. At the moment I look at my pace and feel a pang of frustration knowing where I was a few months back, and where I am now.

We set off through a glamorous trading estate, before heading down past Gateshead College and towards the Baltic. Its mentally tough at this point as you start to see the fast club runners heading towards you and you are thinking that they don’t have long to go and you have not long started. Its like this pretty much the whole way round, so if you aren’t a fan of out and back courses this isn’t the one for you.

Despite the size of the event there aren’t masses of spectators, so its great when you pass the Baltic and there is the usual TBH cheering squad. I was only a short distance into the run and already struggling, so it was nice to hear my name being shouted. 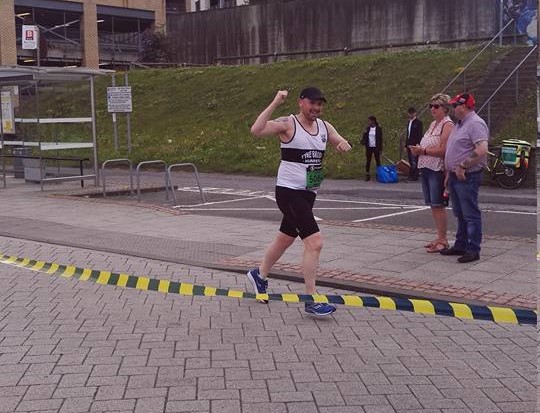 Past the Sage its quite undulating as you get to the High Level Bridge and further along to the King Edward Bridge. Its at this point when you get to the water station. It couldn’t come sooner for me. Like a baton in a relay race I grabbed the bottle. Not realising the top had been taken off I proceeded to waterboard myself much to the amusement of the boy scout who gave me the bottle. The water didn’t touch the sides and it was finished before I hit the 5K mark.  Passing numerous TBH runners along the way most had the same look on their face as me, sweat burning the eyes and gritted teeth. 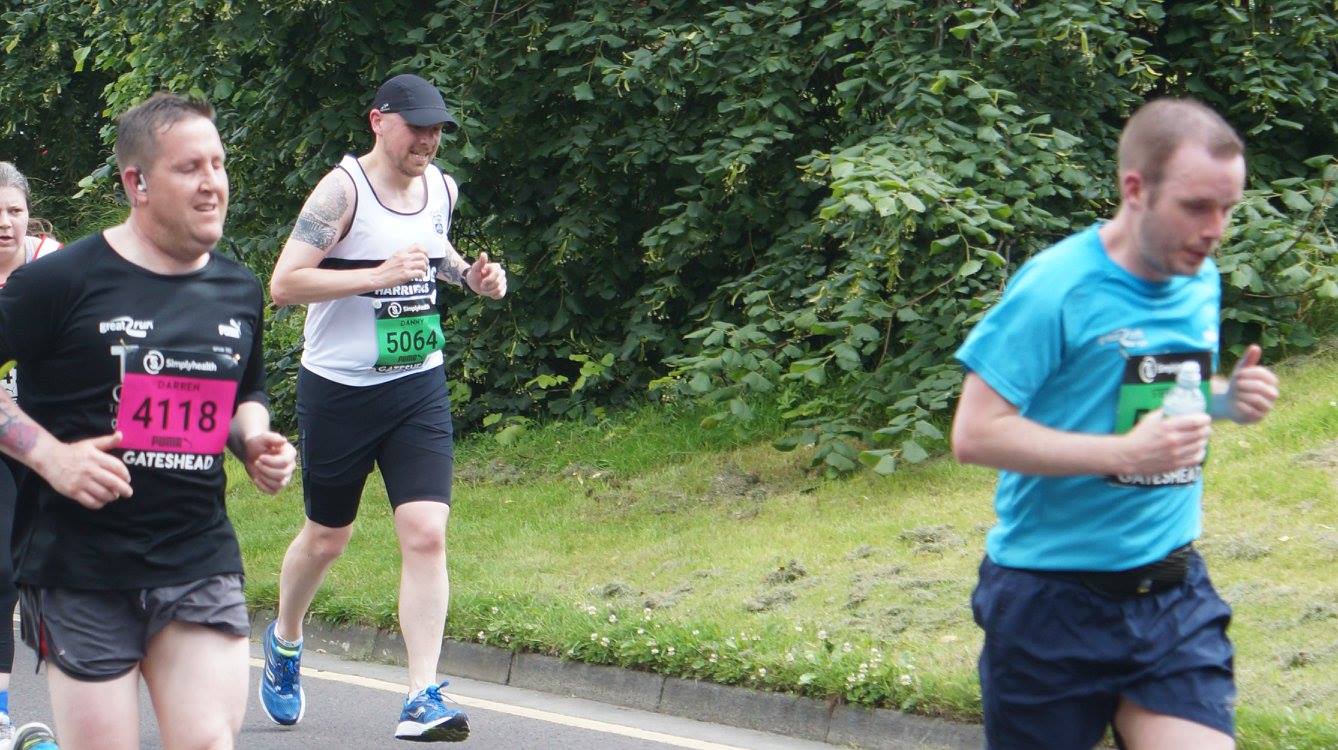 Hey, come back with that water!

My legs got heavier and heavier as the run progressed. My thirst soon came back and I even contemplated stopping to pick up an already discarded bottle. Back along winding route and past the TBH cheering squad and another much needed boost before the heading toward more trading estate. It was at this point Rob Wishart seemed to appear from nowhere. We had a brief chat where I told him I was struggling and showed him my sky high heart rate. He joked that it was probably best that he didn’t look at his and he cantered off ahead of me. In my head I knew I was going to walk up the hills before I even got to them, so I was already going to lose that battle before I started. I always think its ok to walk at any point in a race, but if you make that effort to run up a hill, even if it is very slowly that sense of achievement will carry you through the rest of the run, and in comparison should feel easy in comparison. I rarely listen to my own advice though. 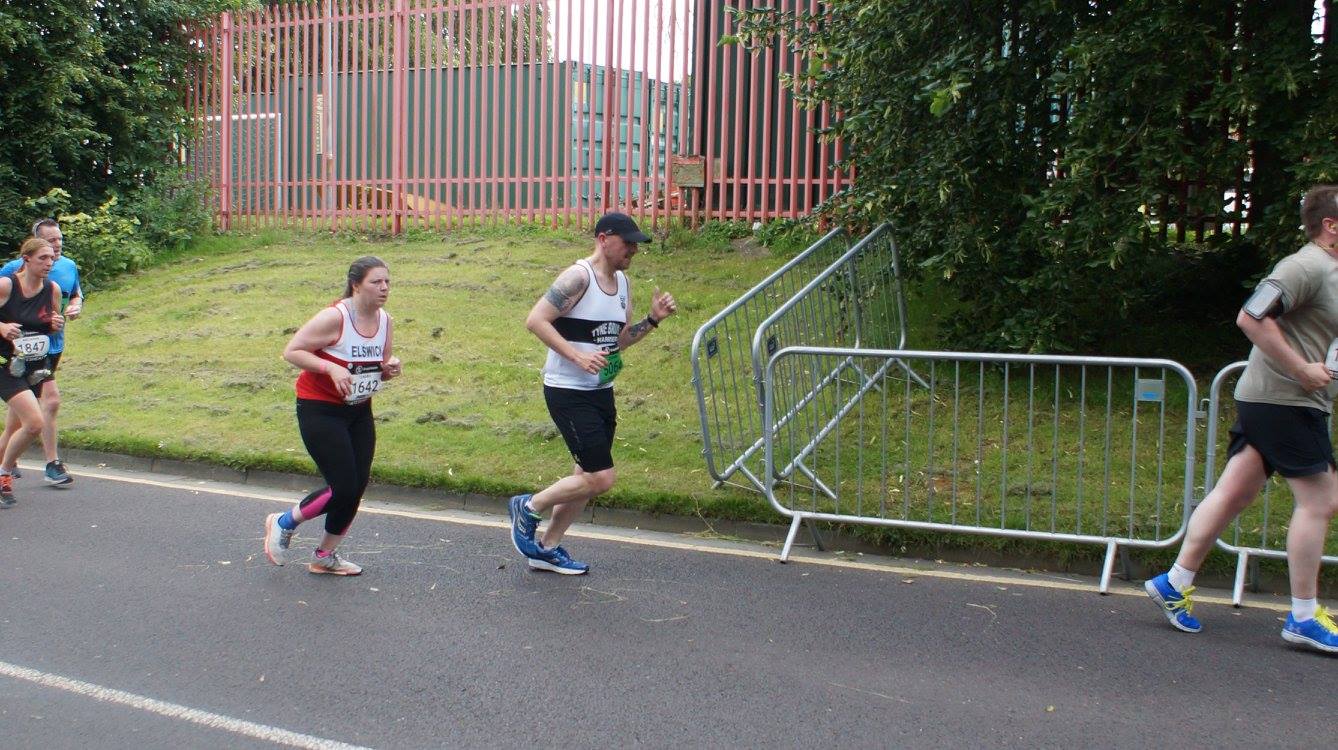 At the top of the Slog on The Tyne I picked up the pace again, it may have been a snails pace, but it was better than walking. I heard  a quick shout from Mr Nemeth, where I just replied by shaking my head. The end couldn’t come quick enough.  There aren’t many highlights in this run, but the stadium finish is one of them. After the hard pavements it feels great on your feet, and you can pretend that the people shouting in the stands are there for you. I crossed the line with a time of 55:28. A long way off previous times, but its great to see the improvements from a few weeks back, even with the hill walks and the heat.

Was it the comeback I was hoping for? Not quite, but despite hating the vast majority of the run it felt great to be part of the family again. See you on the start line soon.