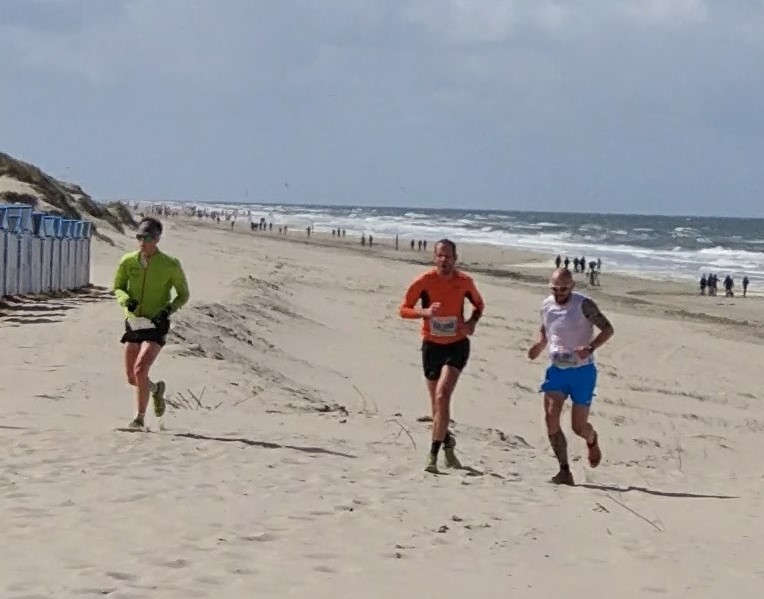 Wind, sand and ever changing plans, racing my first ultra.

This is it, four months of specific training all for this moment, to toe the start line of my first ultra-race, the 60 van Texel. A new adventure, away from the marathon and into the unknown. Got to love the anticipation while waiting in the start area of a big race, feel all the runners buzzing, roaring to go. I spotted the two podium finishers of last time, Dutch ultra-running experts Pascal van Norden and Huub van Noorden and made a note to try and stay with them. Their vast experience meant they would start out at a sensible, conservative pace, right?

And we’re off! 572 runners starting their 60km loop. Immediately, Pascal and Huub pulled away from the pack. Decision time, spend some energy now to keep up, or save energy and risk being alone on the beach? OK, I’ll try and keep up. 50 meters into my first ever ultra and the sensible pacing plan was gone already… Fresh legs meant the first 5km didn’t feel too hard, but we were flying at a 3:35min/km pace. Now, that’s a pace I can hold for a half marathon, not for three times that distance. Despite knowing that I would regret the blistering starting pace at a later stage, I was happy to be here, starting the sand section in the lead group.

Well, that was the case for the first 200m of sandy dunes when I lost contact with the other two runners. Right, change of plans again, try and find my own pace as I had 8.5km of beach ahead of me, with wind force 5 blowing straight in my face. The pace dropped to about 4:30min/km, the two lead runners pulled away, but stayed within reach. Towards the end of the first beach section I caught up to them, we left the beach together, slowly climbing the steep sandy dune.

The trails were a lot easier to run on. After 15km, we passed a crowded spot and all the cheering made me forget the struggles on the beach. By now Huub and Pascal must have realised that, despite their best efforts, they were still stuck with me, so we started chatting a bit and all refuelled while out of the wind in the forest. The longest beach section was done and we were settling into a reasonable relaxing pace. Relaxing enough to prompt a little toilet break, initiated by Pascal, and soon followed by Huub and me. Being an ultra-first-timer and never having had mid race toilet break I somehow found this hilarious, leading the race, pushing the pace and then just stopping for 30 seconds!

The final beach section was only 4.5km long, so that should be slightly easier? Unfortunately, for the third time already in this race, theory didn’t quite match with reality. With the incoming tide only a narrow ridge between the soft sand and sea remained. Whoever was leading our group had to run in the sea while the other two were running in the soft sand. Hard work, but between the three of us we all did our part, it was good to have some respite from the wind. 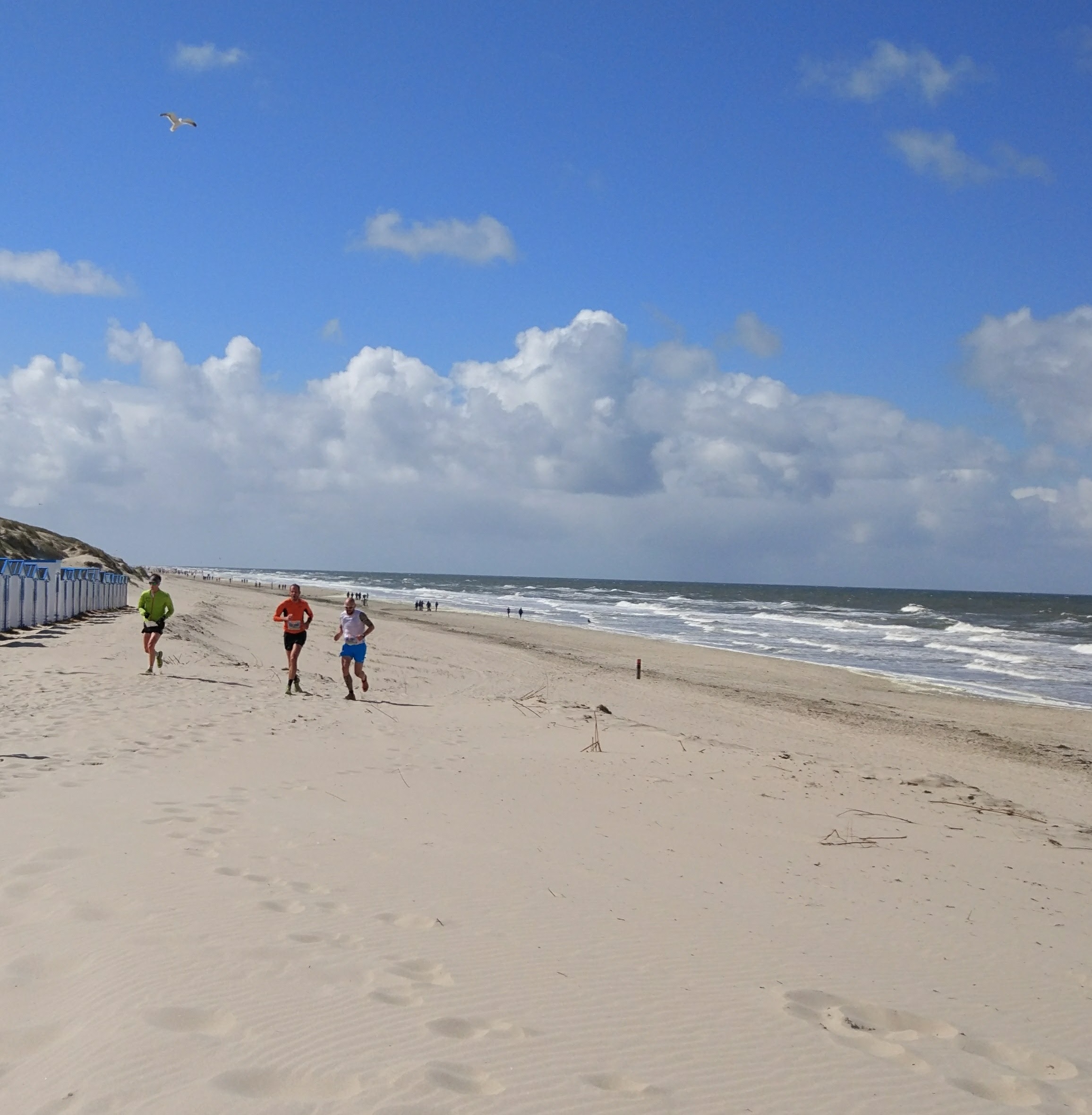 Coming off the beach for the final time (Cees in orange)

Coming off the final beach section, my spirits were lifted by seeing my wife (missed Becki at our first planned meeting point) and I was looking forward to the upcoming easier section. Running down the dunes towards a packed trail I felt strong. 22.5km done, 37.5km to go, only 13 remaining with a head wind. The kms ticked away on rolling trails, never really settling for a constant pace. The chatting was over, we were all waiting for the turning point, followed by tailwind along straight roads parallel with the dike. I was looking forward to seeing my wife again as you can see by the picture below! 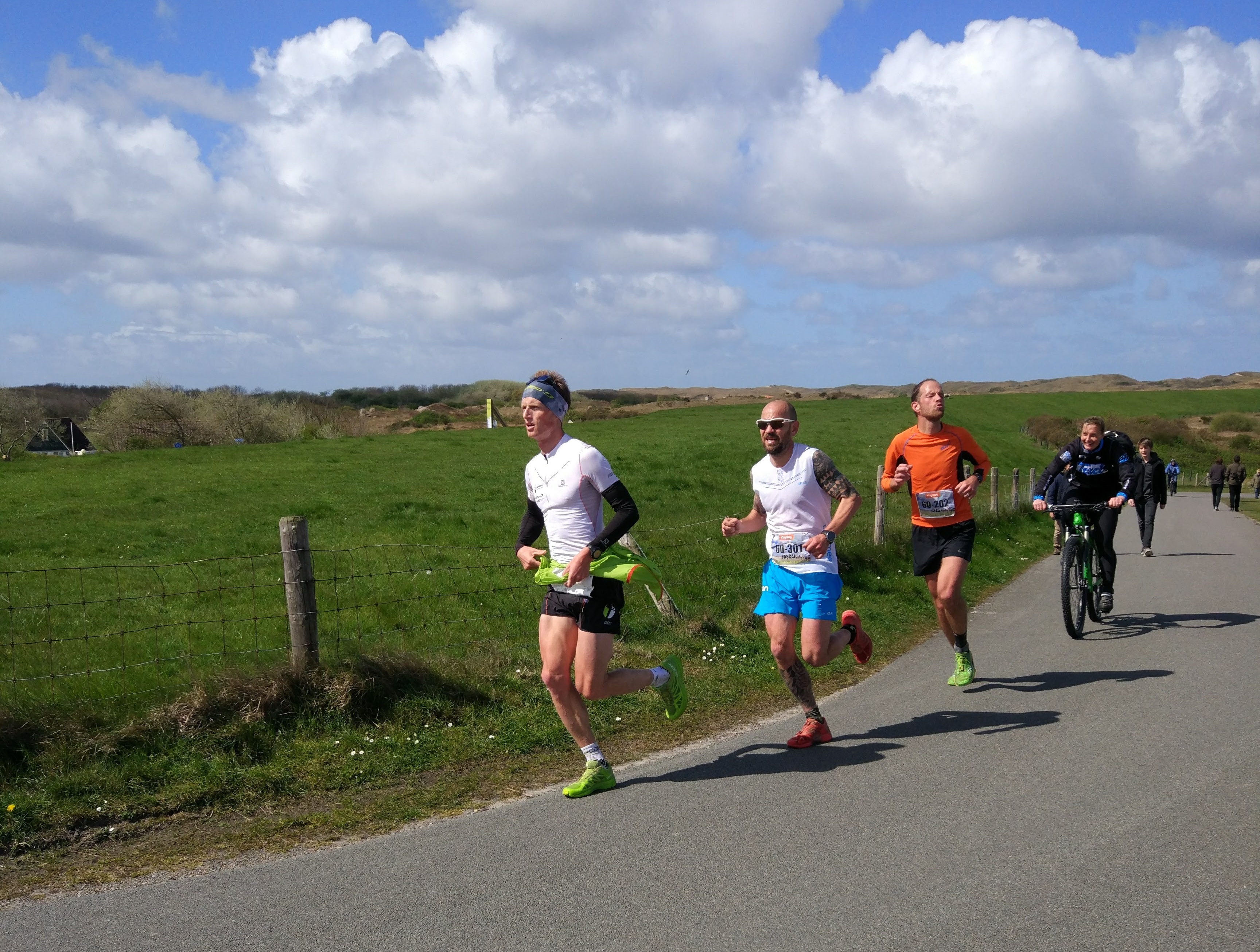 Yes, the lighthouse, only 25km to go and tailwind! This is where Pascal and Huub’s experience in ultra-running showed. While I was happy to hold the pace and maybe even relax a little, their plan was to pull away at this stage. Huub went off and Pascal followed him at a slightly slower pace. I tried to stay within reach of Pascal, but the legs reminded me of that fast start pace and those beach sections. My pace dropped from 4:00 to 4:15min/km but with the tailwind I felt like I could hold this pace. With over 35km done, this would normally be the part where I could smell the finish of the marathon, the prospect of another 25km did not seem very appealing at this stage. With the two leaders pulling away I started to ask my bike support and good friend Furu (shown in the photograph above) if she could see anyone behind me, this question would be repeated multiple times towards the finish, always met with the same answer: “not a soul in sight”, very reassuring!

At 46km the route ventures away from the dike into a small village, with tailwind turning into a side wind, this is where I hit the wall. Normally a very lonely, introspective moment, experienced by all long-distance runners, the moment to find that little bit of extra and when the mind needs to stay strong. With support from Furu and Becki I never felt lonely, knowing I would see Becki two more times before the finish and having someone to chat to all the time was great support. The pace slowly went down to 4:40min/km but coming back to the dike with only 10km I realised that the suffering was almost over.

After passing the village of Oudeschild, including a climb out of the harbour, there were signs every km, counting down. One parkrun to go. The course turned towards the NW, straight into the wind again, followed by the only climb of the entire race. Many years ago, I started training for my first marathon in these surroundings, the roads were familiar, the state of my legs wasn’t. By now another friend, Lorendz had also joined us by bike, to have two people cheering you on at the end of an ultra was a great experience. The final gentle descent towards Den Burgh was exactly how I had imagined it for the last hour, a big relief. Made it, third place!

Here’s a link to my Garmin upload: Thou shalt not stop the Garmin for mid-race toilet breaks

Thanks to Becki for the photographs