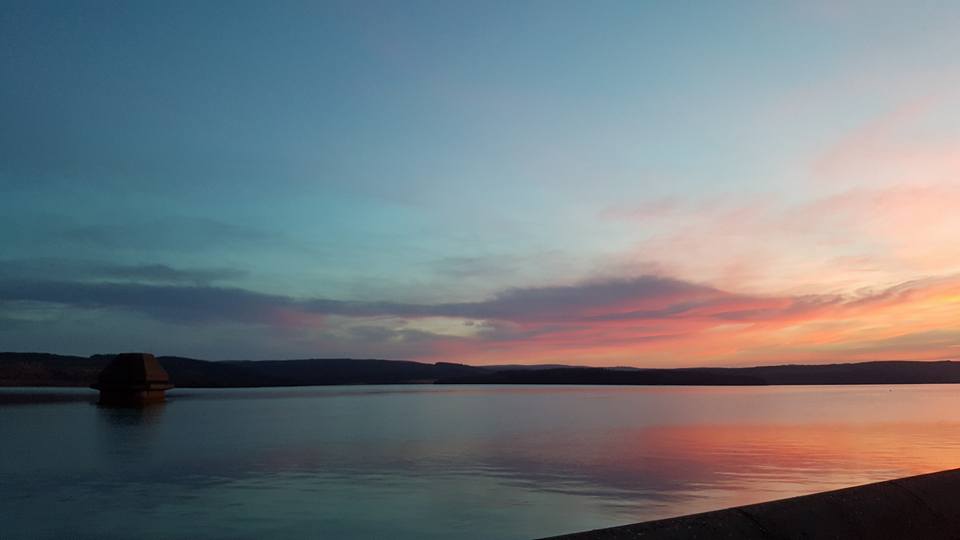 Vicki Deritis recounts the delights of Kielder Water during the Dark Skies 14M.

Described by the organisers, Trail Outlaws, thus ‘At nearly 580sq miles, this dark sky zone, known as Northumberland International Dark Sky Park, is the largest area of protected night sky in Europe. It is the first of its kind in England and one of the largest in the world.  The Dark Skies Run gives runners the fantastic opportunity to both run and experience this unique and incredible space.  Despite the darkness of the skies, on a clear night it is even possible to run sections without a torch as the moon reflects off the reservoir. This environment ensures that this is not just a race but an experience and one that at times can feel almost spiritual as you the runner become one with both the trail and the night sky’. Now, I don’t know about all this feeling spiritual malarkey but I rather liked the idea of running round a big lake in the forest in the dark. There was a marathon distance run was on the Saturday and a 14 mile run on the Sunday night. John (Tollitt) and I signed up for the 14 miles.

We drove up to the Race HQ at the Hawkhirst Activity Centre on Kielder Water on Sunday afternoon. We timed our arrival as late as we could to still register and then get one of the coaches which would take us to the start point, at the far end of the dam, near Hawkhope. Before we could collect our numbers there was a kit check. The mandatory kit was whistle, head torch and spare batteries, foil blanket, hat and gloves, waterproof jacket, water, emergency food and phone. For the second week running, I wondered why I was being required to carry a minimum of 500ml of water; this time, barely yards away from me for the entire duration of the race, would be the largest artificial lake in the UK. I also considered just how useful my phone would be given that phone coverage in these parts is non-existent. Not non-existent as in, stand on that small hillock over there, face west and wave your phone around in the air in hope, but non-existent as in zilch, zero, nada, zip. Turned out that all they were interested in at kit check was the head torch and the extra batteries.

We got on the coach to take the short drive to the start, arriving about 10 minutes before the race was due to start. Now, I realise I may be sailing into controversial waters here but I’ve never seen entirely what all the fuss is about with Kielder. It’s a giant reservoir surrounded by hundreds of square miles of man-made forest. So what? The only views you get are from the lakeside as climbing above this, for the most part, you are in trees. The visitor centres feel manufactured and sterile and, during the summer months, the biting midges are ubiquitous. There are plenty of places in Northumberland I would choose to go to ahead of Kielder. What Kielder does have going for it though, in addition to it’s remoteness, is an expansive openness and, just at that moment, at 7.50pm, with the sun setting, the view across the lake, all blue, red, orange and pink, was spectacular. Money shot moment over, the mobile phones were put away and we then gathered to listen to the pre-race briefing. The combination of standing towards the back and age-related deafness meant that, as usual, much of what was said passed me by in a muffled and not immediately recognisable number of sounds. The one thing I did catch, though, was reference to the distance being ’14 miles ish’ followed by knowing laughter. As someone who hadn’t bothered to properly read the race bumf until 2 days earlier and, up until then, thought she was doing a half marathon distance, this sounded ominous.

And then we were off. The speedsters quickly disappeared but, for the masses, it was about a mile before the race was sufficiently spread out that you could stop worrying about what other people were doing and begin to enjoy yourself. Our route was to travel anti-clockwise around the lake before finishing back at Hawkhirst. The condition of the path was excellent throughout. The course is well marked in any event but, in addition, the organisers had placed reflective flags along the entire course to make double sure you were kept right. Now, a bit about head torches. It is possible to spend a small fortune on them and make lots of consumer choices regarding lumens, beam patterns and stability. Obviously, I did none of these things and stuck with my all purpose camping and removing dog poo at night model. Lightwise it did the business but I think, if I did more of these ventures, I would probably invest in a more running appropriate torch. That would be one without a slack elastic headband. I quickly discovered that taking my hat off greatly increased torch’s bobbability rending it almost useless. Ergo, my hat stayed on.

As time passed the interplay between light and darkness became more distinct. As we passed around the lake’s bays the head torches of those in front and behind weaved a distinctive line across the hillside. Orange light from the sparsely occupied landscape was distinct and isolated; seemingly floating in blackness. Was that Leaplish? Hawkhirst? Kielder village maybe? The carpet of stars looked immense and, whilst I don’t know my Plough from my Orion’s Belt, Venus from Uranus, I recognise something awe inspiring when I see it.

Lots of people in my part of the race were running in groups with friends or club mates. It was an occasion and one many chose to share with others. There was a very friendly atmosphere. Although a casual observer, in the circumstances, may have marked me out as Johnny No-Mates , I enjoy running by myself and, even if I wasn’t embracing that higher level of consciousness, I was able to consider some of life’s important and more immediate questions. Is that Kielder village ahead? Will I get to the next checkpoint before the cut-off time? Is this heavy breather going to go past me or not and will I make it to the finish without soiling myself? On the subject of cut-off times, the time limit for the 1st checkpoint, at 6.5 miles, was 1.5 hours. The 2nd, at 10 miles, was 2.5 hours and the time limit for the race was 3.5 hours. As it was, I didn’t have any cause to have to worry but I did wonder how the organisers would attempt to enforce the cut-off at checkpoint 1 where there was no road access. Send a boat across from Hawkhirst and make the late-comers row back?

The route is not flat. I had been this way once before on a bike and I had forgotten how not flat the route was. I’d forgotten that that little cycling jaunt took way longer than expected and I’d forgotten that it had involved frequent use of the granny cog. As a result, I ended up talking some right old tosh on the coach to the start,. ‘It’s not too bad at all.The route doesn’t cross many contours and where it does it’s not at a right angle to the contours’. Nevertheless, I still reckon that the website is wrong where it says ascent of 1768’. My Garmin showed only 1050’. After several, probably ill-advised, attempts to run up the first few hills with gusto I adopted the approach of most of the people round me which was to run the flat and downhill sections and walk up the hills as fast as I could. Before the race started I had a vague aspiration of trying to finish in under 3 hours. This was based on not very much. Knowing the correct distance of the race would, for this exercise, have been a bonus. Nevertheless, I liked the sound of under 3 and so that was good enough for me.

Things were looking good for my arbitrary target until about mile 12 after which it all went a bit pear-shaped. 3 hours came and went, the ‘ish’ of the 14 miles turned out to be an additional 0.65 miles and, by now, I just wanted the thing to finish. I’m not convinced I was even thinking straight as I returned to the activity centre because I missed the demarcated final 400 yards which, I subsequently saw, was lit up like Blackpool illuminations for it’s entire length. How did I manage that? Instead, I decided to make my way through a busy car park having to avoid both moving cars and people. Oops!

And then it was over. The finish line was as you entered the Race HQ building. I felt slightly disoriented being suddenly confronted by so much light. I was also extremely tired and a bit wobbly. I was grateful to sit down on the nearby empty chair. John, who had obviously been back for a while, thought now was the right time to initiate a discussion with me about my poor route choice via the car park. I was too knackered to even give the traditional Anglo-Saxon response. Once I felt a bit more together and he’d given up on the lecture, I remembered that we had added to our entry fee the cost of a hot meal each. Who could have possibly guessed that the last thing I would have fancied at that moment would be a vegetable curry? Therefore, passing on the hot school dinner option, I washed down industrial quantities of bourbon biscuits and custard creams with a cup of tea. All was well with the world again. It is difficult to think of many circumstances in life which are not enhanced by the addition of a decent cup of tea.

I would highly recommend this race. It is an unforgettable experience. The £30 entry fee represents good value as the organisation is excellent. The pre-race coach travel is included, the course is well marked, the checkpoints are stocked with food and drink and post race there are hot drinks and snacks. If race medals are your bag then this one was a cracker and you also received a technical t-shirt. There was a decent representation from TBH in a the shape of John, Dave Antill, George Stainsby, Victoria Harrison and Rachel Taylor. Dave finished 6th and last week’s hopeless navigator finished 7th and 1st MV50. Everyone seemed to have enjoyed the race and I’m sure there will be a bigger contingent from the club next year. Oh, and finally, no, it wasn’t Kielder; yes, he went past me and, yes, everything stayed tickety-boo in that department.

Permanent link to this article: https://www.tynebridgeharriers.com/2017/03/30/dark-skies-kielder-14-race-report/