It’s time to name the latest TBH Member of the Month, but…

Who is October’s winner?

Lysanne the XC demon who also recorded a 5k PB in October? 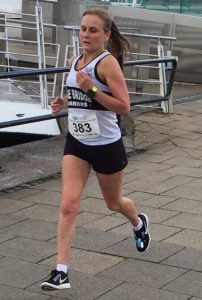 After recording a new PB in the Amsterdam Half Marathon (1:33:55), Kathryn Stevenson followed this up two weeks later with an outstanding performance in the inaugural Morpeth to Newcastle Marathon event.

Not only was this Kathryn’s first attempt at a marathon, but a terrific time of 3:27:31 earned her 3rd place in the ladies race.

Kathryn also represented the club in the two Harrier League fixtures in October, finishing as a team counter in the Druridge Bay meet.

October’s Member of the Month is Kathryn Stevenson

Permanent link to this article: https://www.tynebridgeharriers.com/2016/11/12/tbh-member-of-the-month-october-2016/