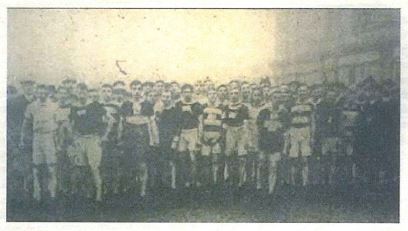 The Northumberland and Durham Paperchase League,

the Early Years, the Forerunner of the North East Harrier League

Modern day cross country running evolved from the public school activity ‘Hare & Hounds’ or ‘Paper Chasing’. This human form of hunting embraced the terms commonly used in the field sport. The pacemaker alluded to the ‘huntsman’ or club captain who was assisted by the ‘whipper in’, whose primary role was to keep the pack together. When the pack needed to be stopped, the whipper in brought it together. This was the case in the Northumberland and Durham Paper Chase League, when the ‘distance judge’ with the help of the whipper in, lined both packs up for the ‘run or sprint in’, usually over one mile to decide the race winner. Imagine the chaos for competitors and technical officials alike if nearly 600 senior men contested North East Harrier League races in a similar way. The Northumberland and Durham Paperchase League was the first cross country league competition in the country. Renamed in 1948 and finally in 1976 as The North East Harrier League, it inaccurately celebrated its 100th anniversary in 2009, the inaugral run in fact took place on Saturday November 7th 1896, from the Victory Inn, Low Gosforth.

Since the Second World War, Gosforth, Gateshead, Sunderland and Morpeth have all dominated either the league or the Sherman Cup, however for the first half of the twentieth century and since the league’s inception, Heaton Harriers were the leading club and one of their members, William J Sloan, became the first local cross country running hero. This book outlines the origin of north east harrier clubs, then focuses on the early years of the league and the leading runners at the time. With every cross country race in the country ‘all out’, after season 1950/51, the local league finally ended 56 years of Hare & Hound’s tradition and races with ‘sprint ins’ were confined to history. A section highlights the introduction of a women’s league with the Houghton Harrier‘s ladies team leading the way. The North East Harrier looks forward to it’s 121st season in the autumn of 2016 and ‘harrier’ included in the title is a clear reminder of the league’s early roots. The paperchase league in 1896 was unique being the first of it’s kind in the country and the current Harrier League is the only one in the United Kingdom operating an envious handicap pack system and continues to offer traditional and competitive running at it’s best.

The book’s title ‘Whipper In’ must not be confused with the pen-name of Elswick legend Norman Woodcock, who for many years wrote the weekly athletics article in the Evening Chronicle and previously the same pseudonym was used in the Shields Daily Gazette.

The book costs £8 and you can obtain a copy by contacting Archie at archiemeadowriggs@btinternet.com

Permanent link to this article: https://www.tynebridgeharriers.com/2016/09/10/whipper-in-history-of-north-east-cross-country/