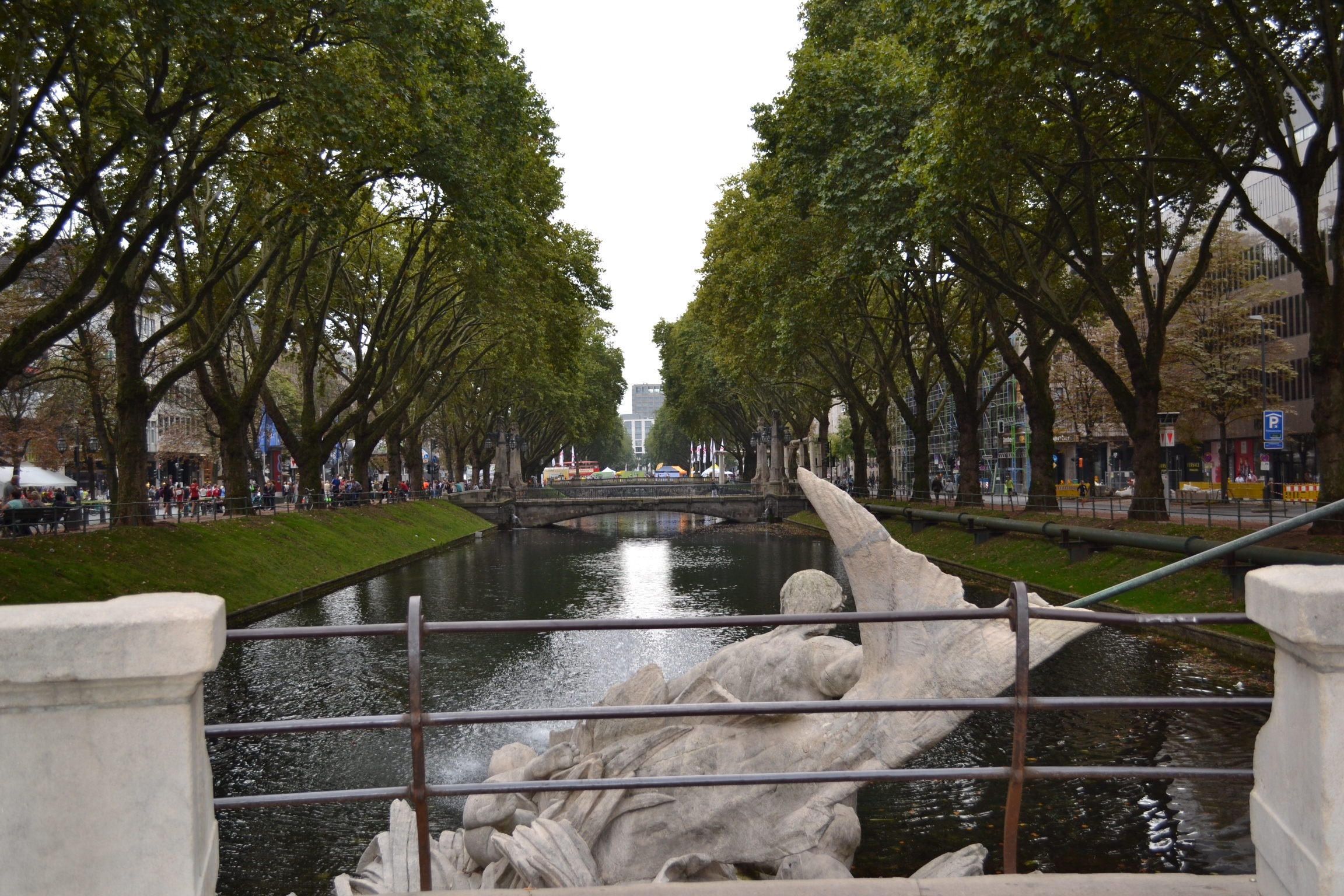 This year Vicki (Deritis) and I are spending our summer holidays cycling around Northern Europe. Having spent last summer following the Rhine on our bicycles from Basel to Cologne, we decided to cycle from Cologne to Rotterdam this year again along the Rhine. As any self respecting runner would do, we checked to see if there were any races we could include on our travels and, lo and behold, there was a 10km race, the Ko-Lauf, in Dusseldorf which would fit in with our plans.

Entering the race on-line was slightly confusing as there appeared to be a number of events taking place on the day and my knowledge of German is largely confined to hello, goodbye, coffee and beer. There were 8 different races altogether, of which 3 were 10k’s. I entered Race 6 which appeared to be the one for runners hoping to finish in under 40 mins. Vicki entered Race 8 for runners whose predicted time would be between 40 and 70 minutes.

We cycled from Cologne to Dusseldorf on the Saturday with the races taking place on the following day. My race was due to start at 13.30 and Vicki’s at 15.30. We got to the registration in plenty of time but the man on the desk took one look at me and seemed quite surprised that I had entered Race 6 and said I’d better be quick as it was a German Men’s Championship race! I dealt with this news by having a warm-up consisting mainly of cycling around the docklands redevelopment having an explore. When I got to the start I had a bit of a look round to check out the opposition (all doing very professional looking warm-ups) and rather got the impression that they were all in a very different league to me.

The course consisted of 5 laps around the very swanky Konigsallee in the centre of town. We were cheered off by a group of cheerleaders and a large crowd and I immediately realised that this was a far higher quality field than I had ever ran in as I wasn’t too far off the back at the first bend. The course was as flat as a pancake and I got carried round the first 2k lap in 7.26 (I wasn’t literally carried round, I’m trying to say I got caught up in the pace of the race). 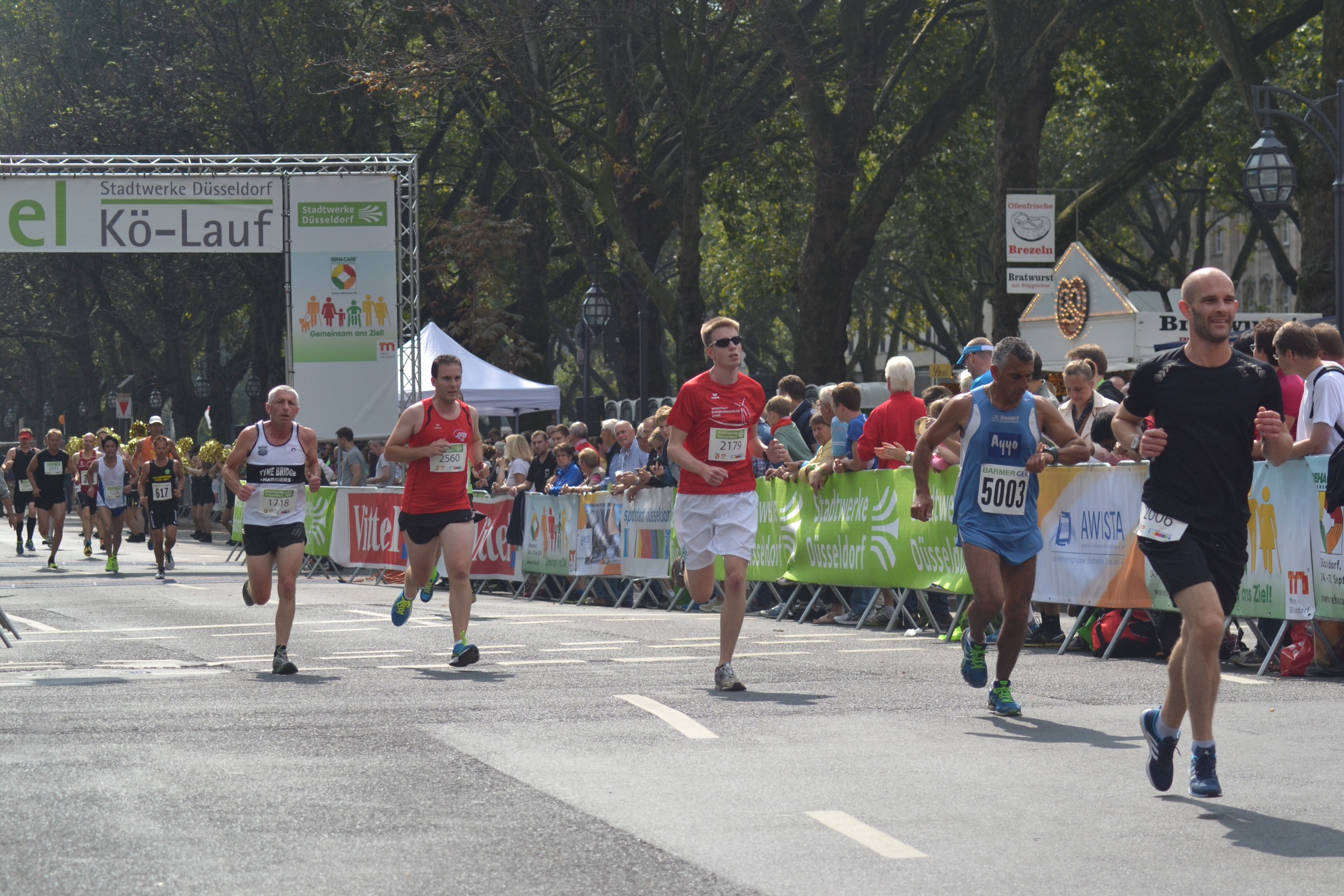 John on one of his five laps.

Subsequent laps were ran at more like 8.20. Nearing the finish of lap 3 I was overtaken by the leading group of four and then for the duration of lap 4 I was constantly being lapped by probably about 100 runners! Lap 5 was a somewhat more solitary affair, but I did manage to overtake a few bodies before crossing the finish line in a time of 40.32 and receiving my medal from one of the cheerleaders. I declined the offer of non-alcoholic beer which was being dished out after the finish line and seemed to be the drink of choice for many of the runners rather than water.

The following race seemed to be the women’s and veteran men’s championships, whilst the last race, which was Vicki’s one, appeared to be for everybody else. I popped up at various points on the route taking photos  in which she manages a scowl in every single one where I was spotted. Vicki finished in 1.09 something. That’s about 10 minutes slower that what she could do about 2 years ago due to a longstanding and seemingly unresolvable injury. 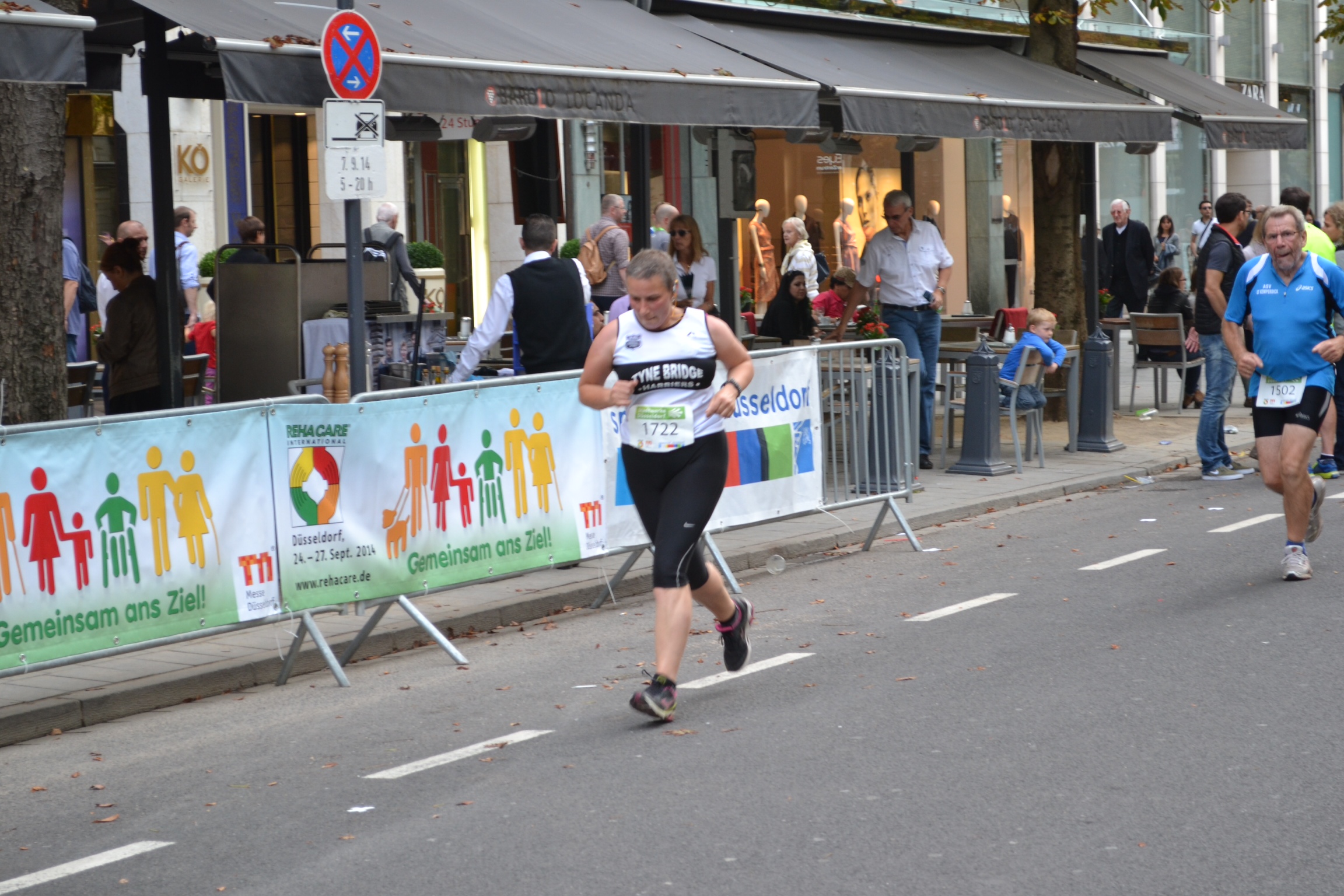 The overall winner of the men’s championship was Andre Pollmacher in a very speedy 29.23. It certainly felt very fast when he flew past me.

The results were a bit confusing as they seemed to separate championship runners from everybody else, but I was quite pleased to see that I’d finished 58th out over 1000 and 3rd V50 excluding the championship runners.It’s a race I would definitely recommend to anybody as Dusseldorf is a fantastic city in a fantastic country. However I would suggest you call upon the services of one of TBH’s German speakers to scan an eye over the details just to make sure you know what it is you’re letting yourself in for first.

Permanent link to this article: https://www.tynebridgeharriers.com/2014/09/10/ko-lauf-10k-race-report/