Richard MacDonald writes this report from the Lake District.

A post on Facebook by Colin Dilks re the Fell Race which is attached to the Patterdale Dog Day, a country show celebrating Lakeland Hounds & Terriers and the local Herdwick Sheep.

The seed was sewn, I could tempt the family to travel across with the promise of a great day out at a dog show and I mentioned some time later that I might attempt the Fell Race if conditions were dry. This was going to be our second travel journey of the month. As just two weeks back we were in the hotels in London trying to decide which all attractions of it we should first visit.

Our youngest daughter, Isla is dog mad so we borrowed Minnie the Chiwawa from my Sister, got up really early and set off for The Lakes fortified by a Gregg’s breakfast special.

Patterdale is only a few miles from Penrith so makes it an ideal place to travel to, situated at the far end of Ullswater you get to take in the views on the way.

The majestic view of Ullswater

Isla and Minnie got 2nd place in the family dog category which made our day, Isla’s face was beaming when presented with her rosette and two pounds prize money.

For my part I was still a bit hesitant about the race as I knew it would interfere with GNR training, a long run due on the Sunday would most likely have to be put off after the excesses of a fell run and besides, I’d never done a fell run or even cross country so there was the worry of injuring myself before the GNR.  However, my fears eased after chatting to a few runners who told me I’d be ok as long as I was careful so I entered the race which was included in the entry price for the day, not many free races around eh?  There may not be other chances to have a go at this sort of thing so I thought you only live once, what the hell, have a go.

The race itself is around 3 miles but climbs 900ft in the first mile and a half before falling gently for a mile and a 900ft descent in three quarters of a mile.

Before the start I got chatting to a runner from South Shields Harriers, he was across in the Lakes assisting a few club mates who were doing an ultra-marathon and had decided to come across and see what fell running was about having never done one himself.  Most of the small field of about 40 competitors were built like mountain goats and I imagine that they’d never eat a chocolate digestive let alone a Gregg’s bacon sandwich and it was clear there were some really strong competitors as you’d expect at such an event.  At the start line I asked my new found friend what his 5k time was, 22mins, just the same as mine so at that point I knew that I at least had my own race within a race.

The race itself followed an enjoyable kids ‘fell run’ which was about 500 yds up a steep hill and back but handicapped by height, it was great fun to watch the competitive spirit as the lad at the back was pipped into 2nd place.

I knew the only way to tackle the run would be to go easy from the start until I’d completed the ascent, at the gun I stayed back and set off through the fields to immediately be hit by a hill which the back half of the field were all walking up, there was no way you could run up the gradient.  Within about 500 yds the placings at our end of the pack were virtually decided.  I managed to get up the 1st steep part ahead of my South Shields competitor and gasped for air as things levelled out for a few hundred metres.  The line of the race then followed the valley up to the top of Arnison Crag. Along the way you had to be really careful about foot placement and attempt to choose dry ground as for the most part we ran on boggy paths or through small streams.  I had my eye on a fellow in red who was ahead of me as appeared to be struggling, I felt sure I could catch him as he had his hands on his knees most of the way up the hill but it wasn’t to be.  However the South Shields runner behind me was now out of sight and the 1st mile had taken 13:19!  At the top of the crag there was a bit of clambering to do but we were greeted with a fantastic view across to Striding Edge.  After scrambling down to the lower ground my breathing got easier and I felt really good as I made fast progress across the undulating peak on good paths.  All the way up and down was really well flagged so it would have been hard to loose your way. 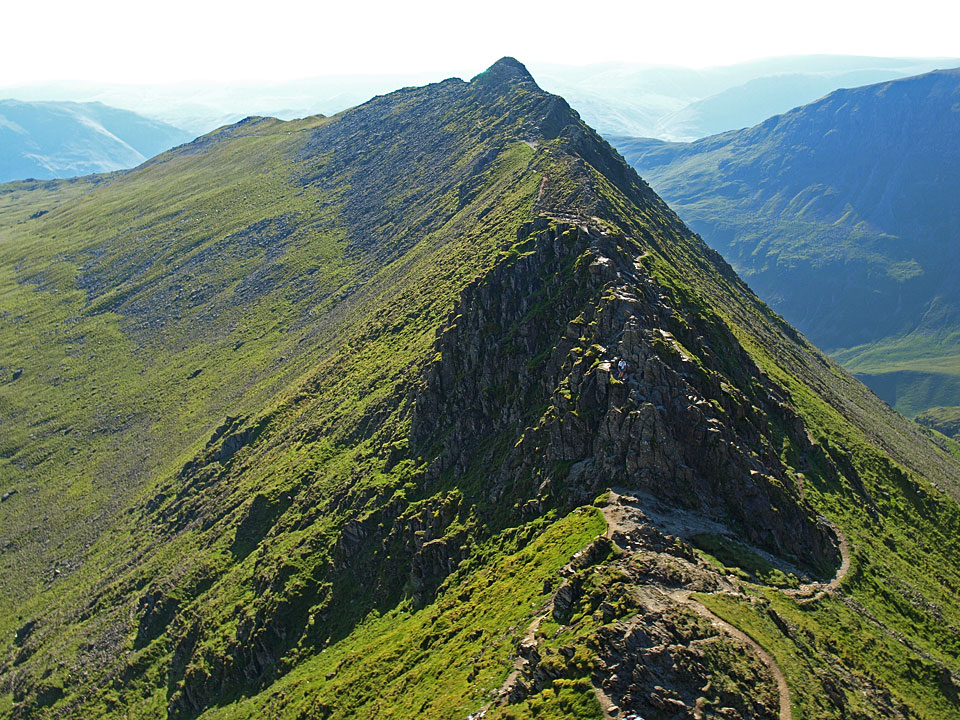 After a little more scrambling down a crag it was down-hill all the way to the finish and again, the view over Glenridding & Ullswater was a sight to behold but there wasn’t much time to take it in.  I didn’t really have a technique for going down the steepest parts and it was a mixture of grass / gravel so I had to take my time not wanting to damage my knees, however I felt ok as I could see no-one behind.  Towards the bottom of the hill there was a gate and a fellow advised me to go left behind him, I went through and to my horror I heard him tell someone else the same about 10 seconds later!  There was no way I was going to get beat now so I kicked on through the last 400 yds and into the finishing straight, it was great to hear the crowd applaud even though I was towards the back of the field managing to finish in 27th place 14 seconds ahead of Andrew Coldwell of South Shields Harriers, we congratulated each other and I think we both decided in our heads we had a new nemesis for the Cross Country season ahead.

Overall, a great day out which other TBH would enjoy, especially as there was a beer tent to reward all the hard work, although the organiser did ask me not to recommend it to too many people when I mentioned the TBH had a membership of over 300.

The race was won by Rhys Findlay Robinson of Dark Peak Fell Runners in 22:30, a new record by 1:20, four minutes ahead of 2nd place.

Permanent link to this article: https://www.tynebridgeharriers.com/2014/08/24/arnison-crag-horseshoe-fell-race/