After some impromptu PB coaching at Southsea parkrun and knocking out some ZZZ’s in the car, I arrived at the Stag/Hen do/B&B-laden mecca of Newquay. Some top quality Wetherspoons’ food and a few drinks (J2O’s only) later and full of inspiration from watching Jo Pavey, it was time to hit the hay and get the game face on ready for the Morning.

A pretty restful night was had and after the traditional pre-race breakfast of Porridge and a Banana, it was time to get to the race and collect my number. After a pre-race weather report of light rain and temperatures in the high teens, I was daunted to be met with blue skies and blazing sunshine instead!  Nevertheless, a quick change and I was battling through the scrum of runners at race HQ.

I was met by a sea of running vests upon entering, the main ones being Carn, Tamar Trotters, Cornwall AC & naturally Newquay. I felt like I was in the pub scene from A Werewolf in London when people caught sight of the mighty Black & White vest. As surprising as it was to the locals to see a ‘northerner’, I was just as surprised to get chatting to an elderly gent from Forest Hall! Once I’d collected my number and had a quick warm-up, it was 9:45 and almost time for the start.

Saying good luck to my training partner and finding a solid piece of space at the start line, I was feeling all of the pre-race nerves and hoping to do my target time of between 93-96 minutes, so I had set out to do an average pace of 7:15min/miles. The race began and off we went, flying along the road on a slight downhill gradient and feeling fresh and full of adrenaline. My legs felt fresh and ready for the challenge ahead. I’d always set my Garmin off to work in Kilometres, but decided to change to miles to see if it would give me a psychological boost. Before I knew it my watch had beeped for the first mile and I was shocked at the time! ‘Slow down’! I told myself. I carried on at a fairly quick pace into mile 2, as I didn’t want to over-compensate in slowing down and knew that if I tired, I would have the extra time in the bag.

The road had by now became slightly windy and single track, but with some cover from the heat. The first of the slight hills began here and people all settled into their natural rhythm within the race. My little bit of hill work the week before helped immensely and I was striding it out without too much effort at all. The second beep went off and another sub-7 mile. 11 to go and I was slightly worried at my pace. Coming out of the track, we made our way back onto the main road and had some more incline up to the start of the second loop of the course. Coming up the hill I noticed the cooling breeze of a headwind…something that was going to be dominant later in the race.

We got to the first water station and made the turn onto the stone trails that make up roughly half of the course. Finally my pace had slowed down to around what I’d expected to run. I put it down to the incline and water stop more than early signs of fatigue and pushed on into the gradual decline feeling happier to be still up on my pace. The decline continued through the trail and the other runners around me started to feel the effects of the heat and the flying start. I settled in with a group of runners from Tamar and one guy from Cornwall AC. Together, we moved forward steadily and picked off the struggling runners, each one giving me more strength. Another mile ahead of schedule and still going strong…. 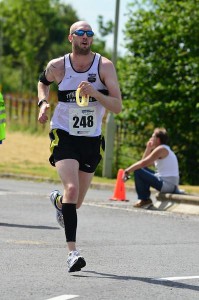 A Few more twists and turns and a rousing performance from a local brass band spurred me on through the twisting trails and open fields. By now it was just me and Cornwall runner left from our group and continuing our strong pace. I felt comfortable with my running and my breathing was working well considering the heat. Still ahead of schedule…just keep going! My first gel was botched at this point, and the decline had evened out into a steady straight trail with minimum turns and a water stop at the end. The trees mercifully closed in and gave some more much-needed cover. The halfway mark was fast approaching and the pace showed no sign of letting up. I had so much going through my head at this point, mainly how could I keep the pace going.

Halfway came and went without too many problems. A water station and a sponge station were taken full advantage of as the heat was slowly starting to take its toll. A slight uphill section was negotiated with relative ease and I went past my Cornwall rival for the first time in the race…game on! We got back on the open road and my legs felt comfortable with the change in surface. This mile was by far the toughest for climb, with most of it being uphill. After climbing for three-quarters of a mile, we reached the top and made the turn to head back towards the finish and had a nice downhill section with a headwind. I felt instantly revitalised by the breeze, but had to up my stride length as the Cornish runner steamed back past me! Spurred on by the battle on my hands and having just 5 miles to go, I pushed on along the undulating, twisting road changing places a few times and picking off a few more runners as we battled on. To my surprise, I ran my second-quickest mile of the race….again I had to tell myself off for too much pace. 4 miles left!

Another botched gel and water station came and went by in a flash and we started the push back along the trail to the finishing straight. This time around we had the pesky headwind and I started to realise that the path was not as flat as I had first thought. Still I pushed for home (prematurely I now realise) and made the 10-mile mark in just under 70minutes! ‘

Just a 5K run to finish now, big efforts needed to get the job done’. A quick blast back past the band and the path had narrowed now making it harder to overtake runners. The pace had really started to take it out of me now, but I knew I had to dig deep and a truly remarkable time was on the cards. One water station awaited me at the end of mile 12 and it spurred me on massively. Out of nowhere, my legs suddenly went like lead and every step had become a massive struggle. I had now used all the water in my bottle and felt like I was running on absolute empty. I used every ounce of mental strength I had to get myself back across the bridge and to the water stop. The final mile beckoned and the water gave me a surge of adrenaline. This is it! I flew out onto the main finish drag and felt the wind hit me for six. Surging forward, my Cornwall rival had now popped up on my shoulder from nowhere and we were urging each other on towards the finish. I knew that the PB was in the bag, but sub-92 was on and I hadn’t run so well to let it slide now. Summoning up every ounce of strength I had left, I pushed up the final bank and turned into the home straight.

The 13th mile had bleeped and it was a straight sprint for 200m. I tried all I could, however my rival had just too much and crossed the line an agonising 2 seconds ahead of me! I checked the watch and was amazed at my finishing time of 1:31:53. After congratulating the victor in the race, I collected my finishers’ T-shirt and collapsed utterly spent by it all. Andy, my training partner crossed the line in 1:37:22, right in the middle of his own target time after suffering with a back injury. We both congratulated each other on a cracking run and limped slowly back to the car, both pleased with our runs and wishing the journey back to Portsmouth would go smoothly.

Thanks for reading my report, I hope you enjoyed it!

Permanent link to this article: https://www.tynebridgeharriers.com/2014/08/05/indian-queens-half-marathon-race-report/