A fabulous weekend of running in Edinburgh began with a 5k and 10k race on Saturday. Representing Tyne Bridge Harriers in the 10k event were Group 1 sharp shooters Shaun Brown and Alex Polding. Here’s Alex’s account of the race.

With a big TBH turnout expected for Sunday, it was left to Shaun and me to kick off the EMF weekend at Saturday’s 10k.

We set off to warm up, and assess the severity of the big hill, a long steady climb over the first couple of kilometres. Warmed up, and going through our drills, Shaun checked his watch to read 8.52 (race start 9); us still in trackies and still to drop our bags off. After a mad dash to the start, and some jumping of barriers, we were on the line with two minutes to go; Shaun having flashbacks of 12 stage.

A short, flat stretch to the start of the climb saw 8 of us pull away. A group of 4 then broke away up the hill, led by two internationals, Harry Summers (Australia) and Derek Hawkins (Scotland), and a group of 4, with Shaun and me, settled into a rhythm a little off the pace. By the end of the climb, I had dropped just off the chasing group, in hindsight I probably should have dug in and stayed with them, ending up on my own for most of the race. On the decent I saw Shaun steadily pulling away from the other two, to try reel in the two who had gone off fast with the internationals, knowing they were probably feeling the effects of going out hard.

I spent the next 6k trying, in vain, to at least maintain the same distance from the two guys ahead, only to be caught by someone I hadn’t even realised was chasing me down. Shaun steadily gained on 4th, an unexpected sharp incline, and some great support from Wallsend, giving him what he needed to push past, and staying ahead on the fast downhill to the finish. 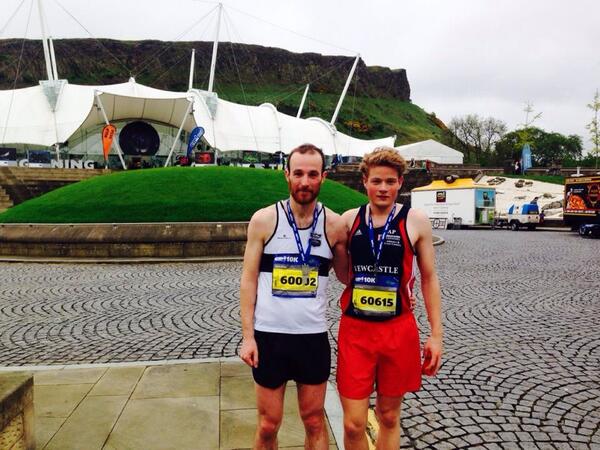 Shaun crossed the line in 34.50, giving him 4th place, I followed in 36.30 (9th); overall, a respectable start to TBHs EMF campaign. From what I saw on Sunday, this was continued with some brilliant half & marathon runs; and some typically indefatigable support (Misses Coffey, Sedgley & Walsh in particular).