Although there were some noteworthy performances in the Senior/Veterans races, perhaps more significantly for the club were the results in the junior races.

Star in the making Niamh Hall writes this report. 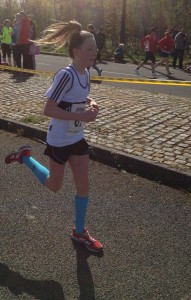 On the morning of the Good Friday Relays I had a slight problem. When I was getting ready I realised we only had one TBH running vest between me and my sister. As my sister was in the first race she got the vest and with me being in the race after I didn’t think we would have time to change vest (unless she did it in record breaking time.) Fortunately Eve (Helm) came in first from TBH and I managed to borrow her vest for my race. Unfortunately I wasn’t prepared and was incredibly nervous I had no time to warm up because of the vest situation.

Anyways when the actual race started I got a great start being in the middle of the pack and soon as I got to the roundabout I got overtook by a big group of runners. This didn’t help me and I was therefore near the back in tried to catch back up to the group but I couldn’t. By the end of the race I was incredibly tired and didn’t have any energy to do a sprint finish but managed to hang on the back of someone till the end.

Overall I had an eventful race and hopefully I should do better next time. Well done to the U13’s, Lily, Jane and Eve all having a great race. Apart from Jane getting tripped up and being sick at the end.

Big thanks to Si for running half the race with Lily and giving me a shout at the end when I most needed it! 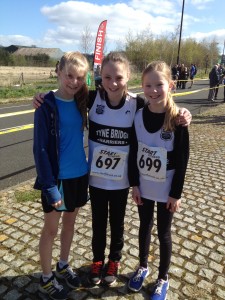 As Niamh has already mentioned, well done to Eve Helm, Jane Harland and Lily Hall for closing an U13 girls team and to Niamh herself for an excellent run in the U15 girls race.

There were some very gutsy performances from all concerned, with special mention to Eve for finishing 7th in her category, Jane for an excellent run despite being brought down on the last corner (picking herself up and then beating the runner who tripped her up) and Lily for a strong run to close the team.
Some of our runners were the youngest in their age group, and that is really hard to cope with, as they are running against people several years older than they are.