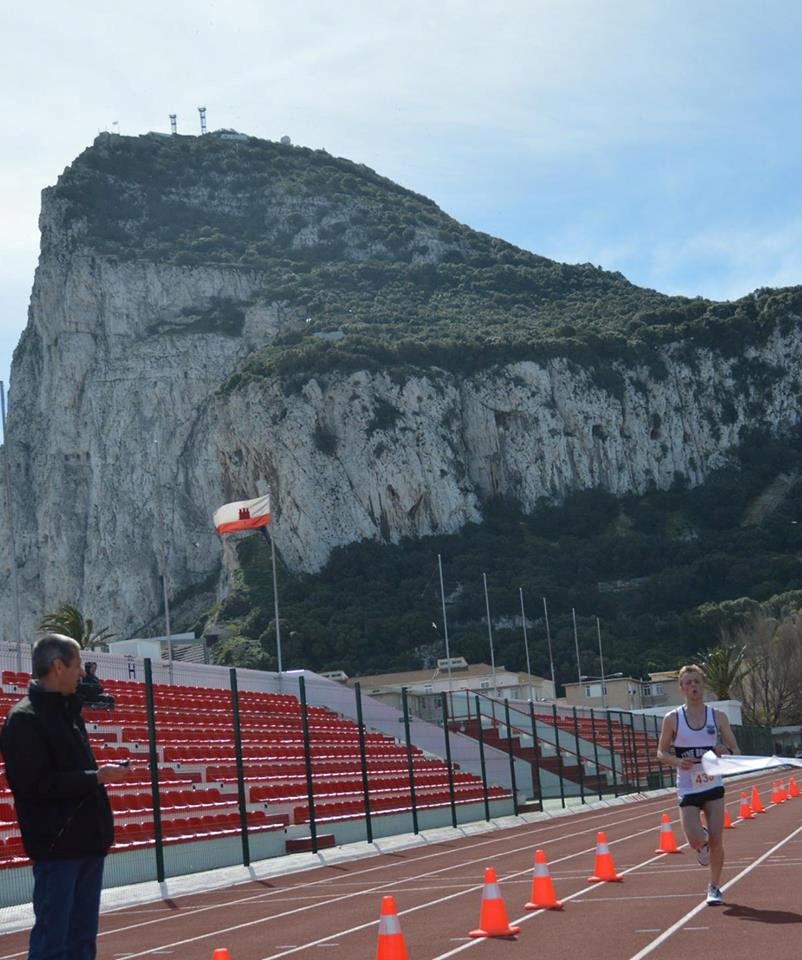 On his way to victory - TC

So, a pigeon walks into a bar. You may think that this is a start of a joke, but this did actually happen when I went to Gibraltar. Although currently based in Seville, I recently went to Gibraltar for a half marathon that was advertised on the Gibraltar Amateur Athletics Association (GAAA) website. In a way, it was sheer luck that I even found out about this race, as a group of us were supposed to go to Morocco for the weekend that we had to cancel, so instead I spent part of Friday evening looking for races in Portugal and Gibraltar. This was when I found out about this race barely 36 hours later, and I immediately went about booking buses and hostels.

The timing of the half marathon couldn’t have been any better as well. My main goal for the first half of the year is to go for the Madrid Marathon as a possible PB attempt (currently 2.37), or at least qualify for the London Marathon elite entry time (2.45), so with this half taking place 5 weeks before the marathon, I knew I would be able to use it to see how I was progressing.

On the day of the race after a light but satisfying breakfast, I made my way to Victoria Stadium on the north side of Gibraltar by the airport runway. I was perhaps a bit too keen and got there around an hour before the start of the race, but I wanted to get there early so I could enter for it and get prepared. I had an amusing rush through the stadium during this time trying to find some toilet paper having to eventually go and see reception for some, and while the guy got a roll and asked if that was enough, I jokingly replied “I think so”.

Entries were taken on the day for only £2, and although the race only attracted around 30 people, it was definitely a very friendly atmosphere as I got started talking to some of the local Gib athletes as we were able to recognise who would be up for a race. A race brief was held about ten minutes before the start about the course before everyone got ready to start. With minutes to go before the  10am start, I went over my race plan to run approx 5.40 min/mile, but I knew from looking at last year’s results I could be in for a chance for the overall win.

The race started off with 3 laps of the track, and from the pacce it was joked from one of the runners that we were doing 400m reps. I lead the pack out of the stadium onto Bayside Road, before letting myself move into second as we headed to Winston Churchill Avenue going south as I had no idea where I was going.

This marked first of three laps around a part of Gibraltar, which consisted of running along Line Wall Road on the upper part of Gibraltar’s main city wall Line Wall Curtain, past Trafalgar Cemetery onto Rosia Road before turning a sharp left onto Cumberland Road and back onto Rosia Road, going as we came and taking a left at the cemetery going down to Queensway Road, following it all the way on the lower side of Line Wall Curtain to Glacis Road and back onto Bayside Road to complete the lap (you’ll get a better idea by looking on Google Maps/the GAAA website). Although the roads were still open, the GAAA had volunteers to help control traffic and did a good job at that and directing the runners.

Conditions were tough at parts. The upper part of the course from Line Wall Road until going down to Queensway Road was varingly undulating at places, and was also the most exposed to the wind, compare to the flat and sheltered Queensway Road. I was weary of the descent going down onto Queensway Road because of the force it had on the legs comparable to the descent onto the final mile in the Great North Run.
Before the end of the first mile, I soon realised there was an open door van from the Gibraltar Broadcasting Company (GBC) filming the race, so I soon went back into the lead confident where I was going following it, giving me the illusion of being a pro marathon runner. Once the van left, one of the marshals were kind enough to point me in the right direction on his moped for the first lap. There was also a local also on a moped following and chatting with me for over two of these laps, some times giving some good advice of the course.

As the course progressed, my splits were slowly coming down from 5.40 min/mile on the first lap down to 5.30 min/mile on the last lap. Things did get a bit harder after reaching 10 miles due to the previous week’s training and having no taper made it seem this way, but I pushed on regardless of this. I knew I had built up a strong lead as early as the end of the first lap, and I could see 2nd place going the other way in the 2nd lap as Cumberland Road joined up with Rosia Road. When I saw the other runners going the other way on this part of the course, we all nodded at each other giving the thumbs up encouraging each other to keep going.

After the three laps around Gibraltar, the final part of the course was 600 metres around Victoria Stadium. Running around the track felt odd but springy especially having ran most of the race on the road. In all honesty, it only hit me at this point that I won the race, but despite this I was more happy that prep for the Madrid marathon seemed to be going better than expected. I finished in a time of 71.26, although it was over a quarter of a mile shorter than a half as the course had been measured by a car so it could not take the same race line as I did. I think my time would have been around 73 minutes if my watch had hit 13.1 miles, which I would have still been very pleased with as I had not been in training to race a half marathon to my usual standards and expectations.

I stayed around the stadium until the end of the programme to have a chat with some of the Gib athletes, cheer everyone else on as they finished and collected a trophy for first senior and a participant’s medal before going for a brief post-race drink before heading back to Seville. The GBC were there too and I was interviewed about the race, and said they would be able to send a DVD of the interview to my home address.

The people of Gibraltar were very friendly during my brief stay there, and I would recommend anyone going there to pay a visit or even to arrange a trip around the time the GAAA are holding a race, and I could not thank them enough for their hospitality.

Permanent link to this article: https://www.tynebridgeharriers.com/2014/03/27/2014-gibraltar-half-marathon-race-report/