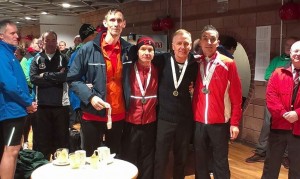 Another excellent run by Kenny Mac in the Scots borders, a report from this year’s Scottish Masters Cross Country

Hawick in the Scottish Borders was the venue for this year’s Scottish Masters Cross Country and the event was hosted by Teviotdale Harriers. Hawick is famous for its woolen mills and production of cashmere jumpers. Their most famous son is the legendary Rugby Commentator Bill McLaren whose quotes and quips are revered to this day.

On this Tyne-Wear derby day I had done a “Chris Waddle” and swapped the black and white of Tyne Bridge for the red and white of Cambuslang. Micky Baker had threatened he would get the twins out if I went on about it too much. This race was a qualifier for the Scottish Vets team for the International in Nottingham later in the year and after a poor run in Cardiff I needed to show improvement.

The night before the race I got all my kit together and decided to swap my spikes from 9mm to 15mm. One of the spikes wouldn’t come out so I ended gnawing at it with a pair of pliers and only managed to knacker it more. A 10pm visit to Micky’s house with the offending shoe but even Micky – who’s favourite saying is “a spike has never beaten me” – could not extract the wee besom. Never mind.

I awoke on race day and got ready to leave but could only find one spike, the naughty one. I hunted high and low and eventually called Micky and it was found all alone and unwanted in his garage, left behind by me the night before. A quick detour to pick up Guy Bracken and we set off on my ancient charabanc. The weather was crisp but dry as we traversed along the A68; as we arrived at Carter Bar on the Border the weather seemed to deteriorate and as we arrived in Hawick a biting, cursing wind in an unholy alliance with cold dreich horizontal rain buffeted the scrawny bunch of aged runners who had travelled from near and far.

It was good to meet up with Stan Mackenzie from Inverness who had taken nine hours to get there whilst we took less than two hours from a different country! A few seasoned runners had already surveyed the course and Guy and I asked for details. “You climb to 800 feet,” was the opening line and I could see the blood drain from Guy’s face, as fast flat and grassy is his forte.

The Sherpa further explained that it was 800 feet to the start line and it was very exposed and windy. Eventually we left the comfort and heat of the leisure centre and walked up the hill to the start. On arrival it was like a scene from the aftermath of Culloden: soaking, starved seasoned campaigners trying to make best of the most inhospitable weather imaginable. Bizarrely there were no tents and people just hid their kit under trees and holes in the ground. The women and V65 men raced first and they finished looking sorry for themselves saying the conditions were awful.

Eventually our race set off and we climed slowly up to the first gate and turned right and dropped down an easy grassed section. We then had another slow climb before entering a vicious rugged section. The next section was a killer, with a determined wind impeding your every movement. My race number was getting blown across my midrift and the biting wind stopped you breathing and I had to turn to the side to breath. This went on for a mile before a few ups and down before entering the main field again.

One lap down and I could see that the finish was going to be 400 metres down hill. The second lap was easier as I knew what to expect and I started advancing through the ranks. I was in a dog fight with another V45 from Central AC and managed to shake him off with half a mile to go. The hallmark of the top of the hill appeared and I took off.

Michael Mcloone was way ahead of me but I edged closer and closer but run out of space and finished a second behind him. I went back to get my kit but it was utterly soaking so I just ran down to the Leisure Centre in my kit I had raced in. I was so looking forward to a boiling hot shower and warmth but alas they were bloody freezing. Lots of runners with low body fat contents were struggling, me included, and we tried to stand under hand driers to alleviate the cold.

Several runners needed medical attention and some were hospitalised due to hypothermia. Turned out I had a good run and was 18th overall. Kerry Liam Wilson won the race and to quote Bill McLaren “he is as quick as a trout up a burn.” Corstorphine won the team prize with a depleted Cambuslang second. I was also 3rd  Vet 45 so happy days.

Permanent link to this article: https://www.tynebridgeharriers.com/2014/02/02/the-scottish-masters-cross-country-1st-feb/