The build up to Malaga had been a torrid one, Emma (Wright) struggling through injuries and the passing of my father less than 2 weeks before had at times put both our participation into doubt.

Such is the mental determination of us both we were never going to pull out.

With the hard miles done, a £20 charge for being 2kg over weight on the luggage, the 3 TBH amigos were off to conquer the Maraton of Malaga 2013.

From the expo to the course, the starting line to drinks stations every 2.5k, this was a truly well organised event. 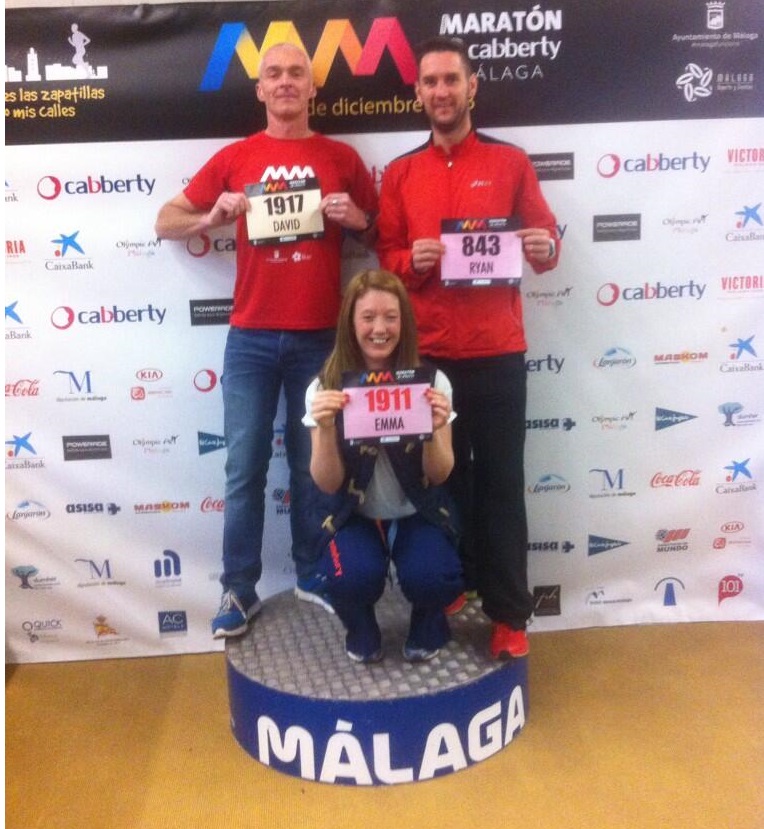 The buzz around the city the day before was bubbling, Dave (Young) and I sank some beers and cheered the mighty toon on to a famous win at Old Trafford, followed with pre race pasta and some red wine, we were ready to go.
This was to be Emma’s first marathon after agonisingly missing out on Seville, myself this was to be my 4th this year and 6th overall.  After a good nights sleep and a light breakfast we embarked on the mile walk to the start, filled with a mixture of nerves, excitement and anticipation that only running a marathon can bring.

It was a chilly morning, still dark as we arrived at the start, the place was awash with smiling faces, nervous bodies and the usual queues too the toilet.  Something about foreign marathons and the atmosphere sets them apart from anything else.  We met with Dave, dropped our bags of and were then greeted by a shout of “tynebridge, tynebridge”, our friend from marathon of Seville had hunted us out to say hello and wish us luck.

To the start we went, the sun was starting to appear across the marina and the air beginning to warm.  Over the tannoy there was an announcement in Spanish, a good luck kiss for Emma and we were off!

The first few Km’s were along the new pier, back round and a loop near the city centre and off along the coast heading east.  My pace felt very easy at around 8:30 then 8:15 and at mile 2 I lengthened my stride and started off sub 8 min miles.  At 7k the elites with Dave seemingly not far behind had hit the turn and were bombing back past us, it was a phenomenal but somewhat frightening sight, to run 1 sub 5 min mile was crazy but too keep that pace for 26.2 is obscene and super human.

The course took you back into the city centre with beautiful views of the streets and the old town.  Feeling good I kept my pace, 7:43, 7:53, 7:50 the miles were ticking over very quickly, before I knew it I was at 14 miles when I was joined by a Spanish guy, Rafa.  The thing I love about marathons is how people help each other.  Rafa was struggling badly with fatigue and injury so we started chatting, it’s amazing how you can get so absorbed in a conversation with a stranger then the next thing I realised we’d gone through 20, 21 miles.  Whilst chatting I discovered Rafa’s father had also passed away recently and he too was running in his memory, we talked about how both would be watching over us and helping us through the final mile.  I hit mile 22 at exactly 3hrs and my thoughts turned to the finish.

I saw Emma at this point with a huge smile on her face, I was relieved to see her and looking so full of beans, she was flying and starting to catch up with me.  “Get to 37k and it’s a park run from here” I kept telling myself.  For those of you who know me know that I despise parkrun (WHAT!!!! – DD) and 5k’s, this made it even harder, even though the dreaded wall never came  Over the last 2 miles my pace dropped to 9:30 min and I just coasted along, soaking up the atmosphere, keeping and eye for Emma to see if we could finish together.

The finish line fast approached, shouts of “tynebridge come on” went up, tiredness I felt before had gone and I broke into a sprint.  The finish area was 2/3 deep of cheering people, waving flags for loved ones, offering encouragement for all who we’re running.   I had a picture of my dad with me that I held aloft as I ran towards the line, feeling proud and over whelmed with emotion I crossed the line in 3:42.24,  my 4th sub 4hr marathon this year and my most enjoyable to date.  Most enjoyable because I trained and ran without the pressure of trying to get a pb, I just went out and did what I love doing best……..I just ran!

At the end we were given food, beer, a medal, our 3rd t-shirt and lots if congratulations.  Overall Malaga has been an Malaga has been an amazing and emotional experience, fantastic company too.  Anyone wanting to get involved in Marathon running should get across to Spain and sample how an event should be done, roll on Seville in 10 weeks then the step up to ultras.

Permanent link to this article: https://www.tynebridgeharriers.com/2013/12/10/2013-malaga-marathon-race-report/