With only a few weeks to go until the GNR some members are looking far and wide for good training runs. For Dave Young this meant a trip to the other side of the country.

Looking for some pre Great North Run races on Google last week I stumbled across the Silloth on Solway beach half marathon and thought – I’ll give it a go, Silloth isn’t that far away from Tyneside.

I duly entered the race on-line and then set about trying to persuade other like minded idiots to participate with me. Unfortunately most TBH’ers were busy with the Exhibition Park 5k Cup, either on the organisational side of things or participating in the race itself so I didn’t get much interest.

By the morning of the race only Sophie Marr was daft enough to want to enter the race so off we set for Silloth. The race instructions advised to park on the main street in Silloth and head for the Marquee on the nearby field to register and collect numbers etc.

On arrival there was no marquee to be seen (it was too windy to put up I guess), but a couple of smaller tents and 2 caravans signalled the race HQ. There was a queue at the larger of the 2 caravans which was occupied not by Gypsy Rose Lee as I initially thought, but by a lovely lady called Vicky who was registering runners and handing out race instructions. She was really grateful that we had travelled such a long way to participate in the race and handed out our race instructions;

“The start is round the corner next to the chip shop, then you run down to the beach, head down the Solway Firth until you reach the turning point at 6.5 miles, and come back again”

– what could be simpler!

At 1:30 the race started (to coincide with low tide) and off we set towards the beach, a check of the Garmin a couple of minutes later put me on a 5:46 pace but once I hit the beach – and the 25mph head wind, the pace dropped significally. 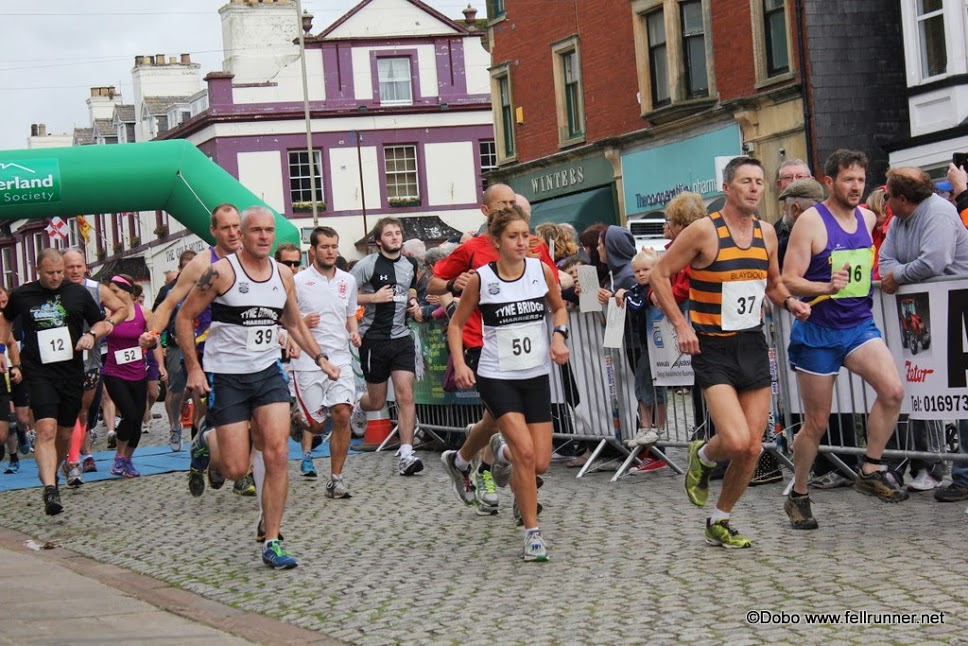 David and Sophie setting off.

The sand wasn’t nice sand like on Tynemouth Beach, it was dry sand, wet sand, pebbles mixed with sand, rocks and sand, muddy sticky sand, sand with ridges, big pools with sand inbetween, and sand with streams running through it – multi terrain as they say. The best option for the bad stretches was to try and run in the tyre tracks left by the drivers of the beach buggies that were marshalling us. The route had occasional markers pointing us in the right direction, and mile markers which were fairly accurate depending on which route you had taken to get to that point. There were also water stations at the 3 mile, halfway, and 10 mile points. 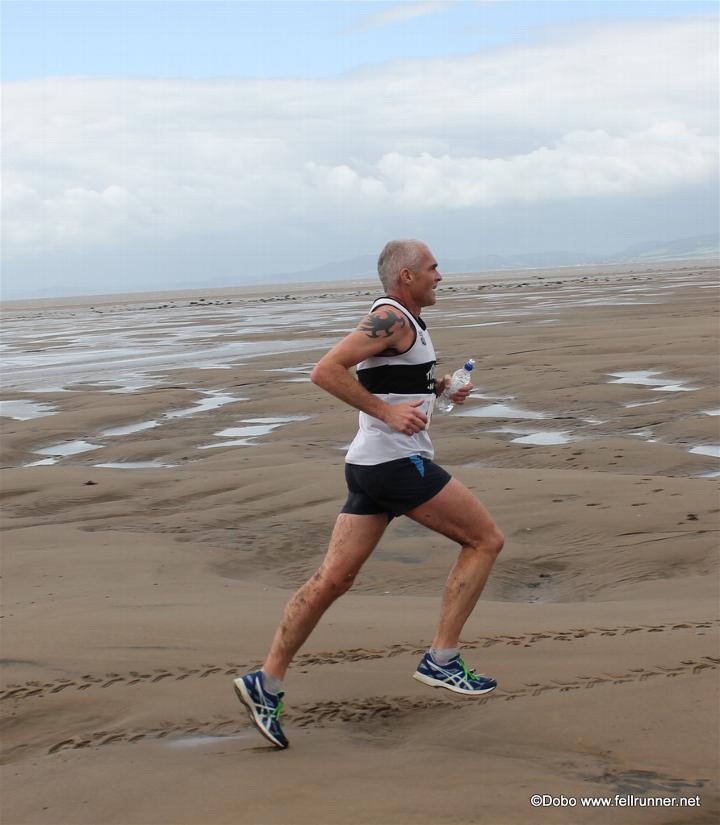 On the outward stretch it was impossible (for me anyway) to get sub 8 min miles and to say it was a relentless struggle into the wind is an understatement. There were a group of 4 of us following the leader and eventual winner Howard Seal (honestly thats his real name), and this gradually whittled away to me being in 2nd place at the turning point, ahead of Steven Atwell (NSPoly), Derek Rose (Carlisle Tri) and Alan Dent (Blaydon).

The second half of the race was a much easier, although at times a lonely affair with the strong wing behind me. Following the first half of the race, I had a better understanding of the best route to take back and could increase the pace. I managed to hold on to 2nd place and finished in a time of 1:39.20, not my best by a fair margin, and was followed across the line by Steven, Derek and then Alan. The winner crossed the line in an excellent time of 1:29.24 assisted I guess by a good local knowledge of the course.

Sophie Marr had an excellent race – she sensibly completed the first half at a conservative pace, and pushed on during the second half where she passed 8 male competitors and finished in 7th place overall (1:46.24). She was narrowly beaten to 2nd place in the ladies race by local runner Helen Young (5 seconds) and had the race been another 100m longer she would have won for sure. Helen had local knowledge of the course which would have been an advantage for her. 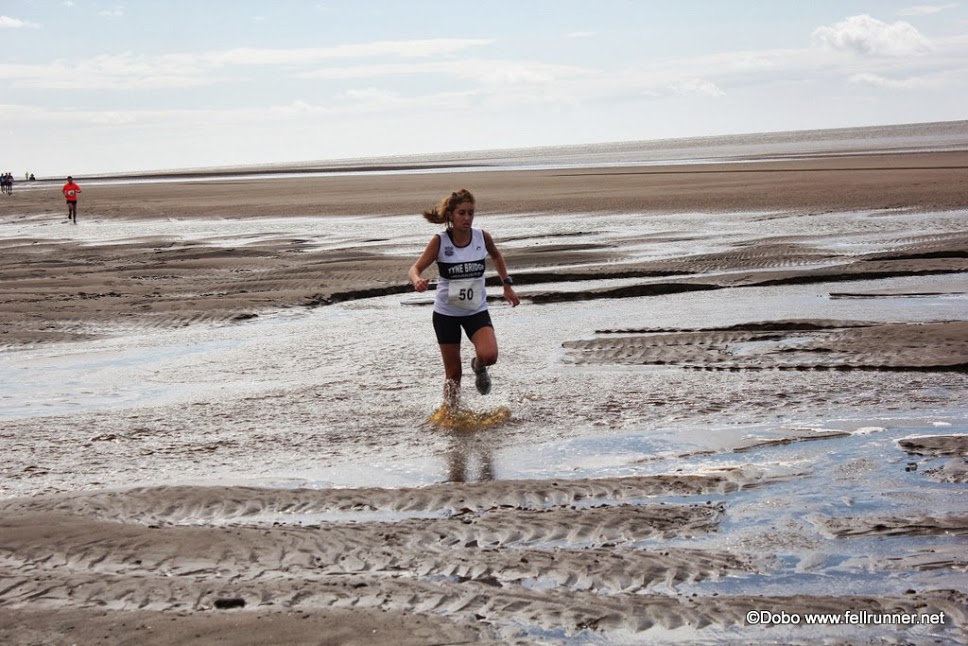 Sophie on her way to 2nd place.

Following the race we were given presented with our finishers medal, and the weirdest (in a nice way) goodie bag I’ve ever had. It consisted of a bag of flour, a token for a bag of chips at the nearby chippy, a stick of Silloth rock, a running vest, 2 key ring fobs, a paper hat, an energy drink, and a pencil – beat that for an £18.00 entry fee Brendan! 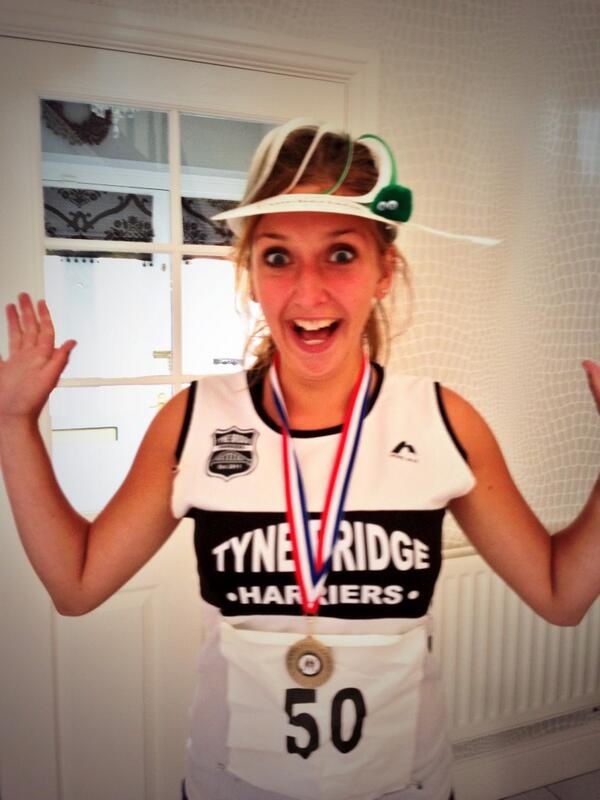 The organisers of this inagural event Silloth Tourist Action Group were very friendly and are keen to see more runners from Tyneside participating in the race next year. They will contact our facebook page to publicise the event at a later date and have offered us the facility to camp out on the field near to the race HQ free of charge if anyone is interested. There are 2 pubs in the vicinity I checked!

Permanent link to this article: https://www.tynebridgeharriers.com/2013/08/19/silloth-on-solway-beach-half-marathon-race-report/