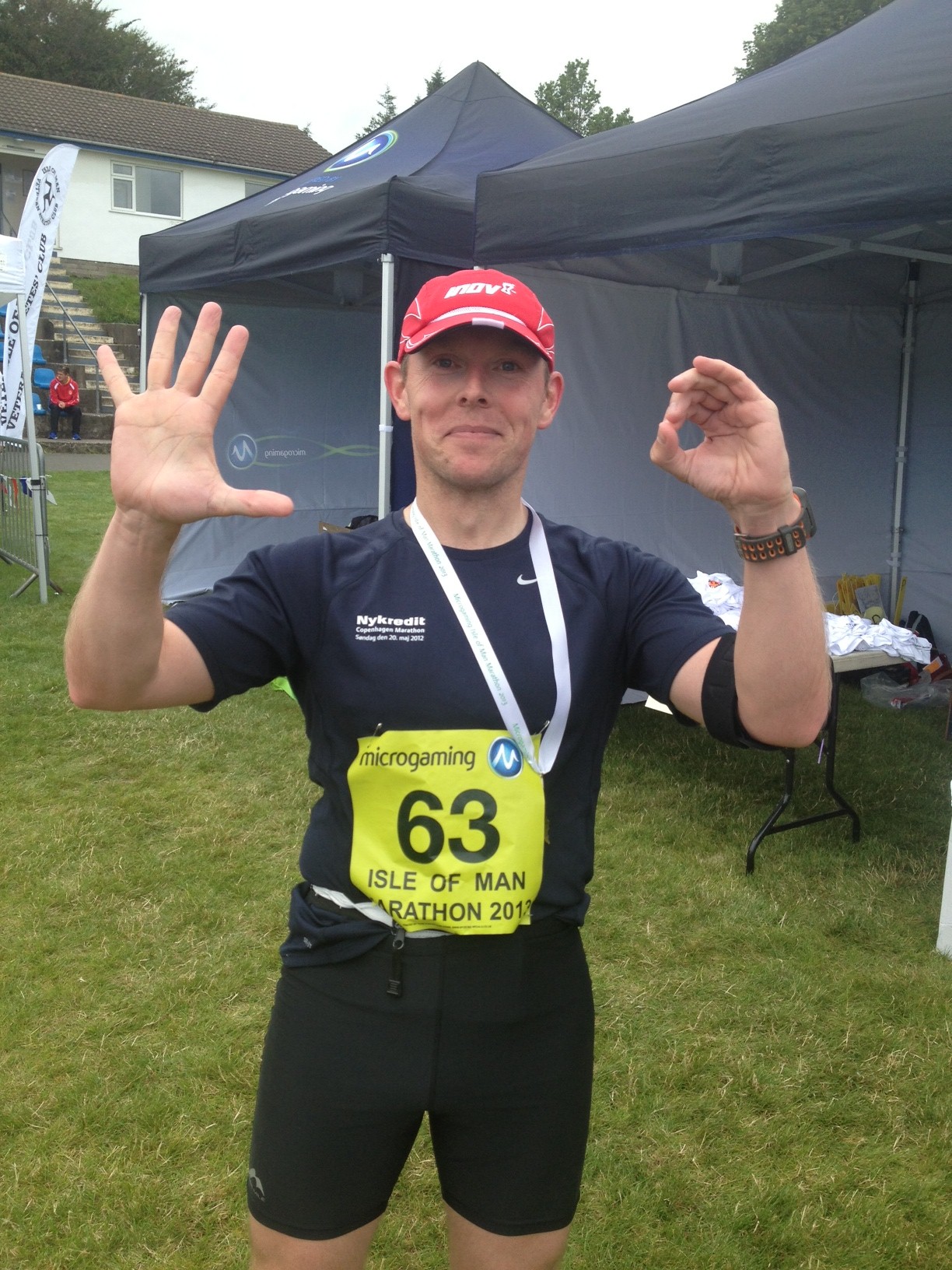 For many, running just one marathon is one marathon too many (just ask club captain Paul Hilton), but for club member Richard Jones you can never have enough of a good thing.

“A game of two halves” is an old football cliché which is very appropriate for my 50th marathon that I completed at Ramsey, Isle of Man.

The vast majority of the non-island runners were staying at the capital Douglas, although the race itself is a hilly two lap circuit starting and finishing at Ramsey on the other side of the island. The race organisers put on buses to fetch the runners over from Douglas so at 7:20am we all gathered at the Sea Terminal to take a scenic 40 minute bus journey over the hills, taking in parts of the famous TT motorcycle circuit where many a rider has lost their life.

On the way to Douglas I sat with a lady who is attempting the world record for running all seven continents in the shortest number of days; she started her attempt at the North Pole in early April and will finish in Antarctica in November, having run on the other five continents in between. The Isle of Man was her European marathon, next up Adelaide at the end of the month. The very best of luck with that!!!

This marathon, like several others I’ve ran, had a definite club feel to it. Judging from the discussions amongst us and looking around there were no first time marathoners, nobody in fancy dress, no relay nonsense, just marathon hardened, wizened runners. There is a half marathon option, starting at 09:30am, but even those competitors all looked experienced.

Several of the 100 Club marathon runners had made the trip and I exchanged a few words with Warren and the “Dudley Massif duo” as well as other familiar faces who I’ve got to know over the last few years, it’s always nice to catch up with people you see occasionally whilst you wait for the start time to come round, find out about races others have done and make a mental note of which ones to do and which to avoid.

The course is a two lap hilly affair, one killer hill at mile 4 and 17 (see pictures), which is about a mile in length and seems to go on forever. The overnight rain had given way to sunshine and constant wind which stayed throughout the day. One of those days where in the direct sunlight it felt hot but in the shade the wind made you feel a little chilly.

Shortly before the start I was approached by a guy proudly wearing an Italian running vest who asked if I would take his photo. I lived in Italy for several years so we got chatting, doing my best to remember the language, amazingly he lives only a few miles from where I used to live in Milan. Great to see someone from Italy coming all the way over to the Isle of Man to do this small marathon, that’s real commitment.

We got going on time at 9am and after the initial five hilly miles, including the killer hill at mile four, I settled into a reasonable rhythm and starting knocking out sub 8 min miles. I’ve had a hamstring problem for the last month or so which stopped me doing a marathon in July, which would have been my 50th, and has slowed me down when running with Group 3, the sort of injury where you think you really ought not to run, but kid yourself that as long as you don’t overdo it you will be able to run through it… 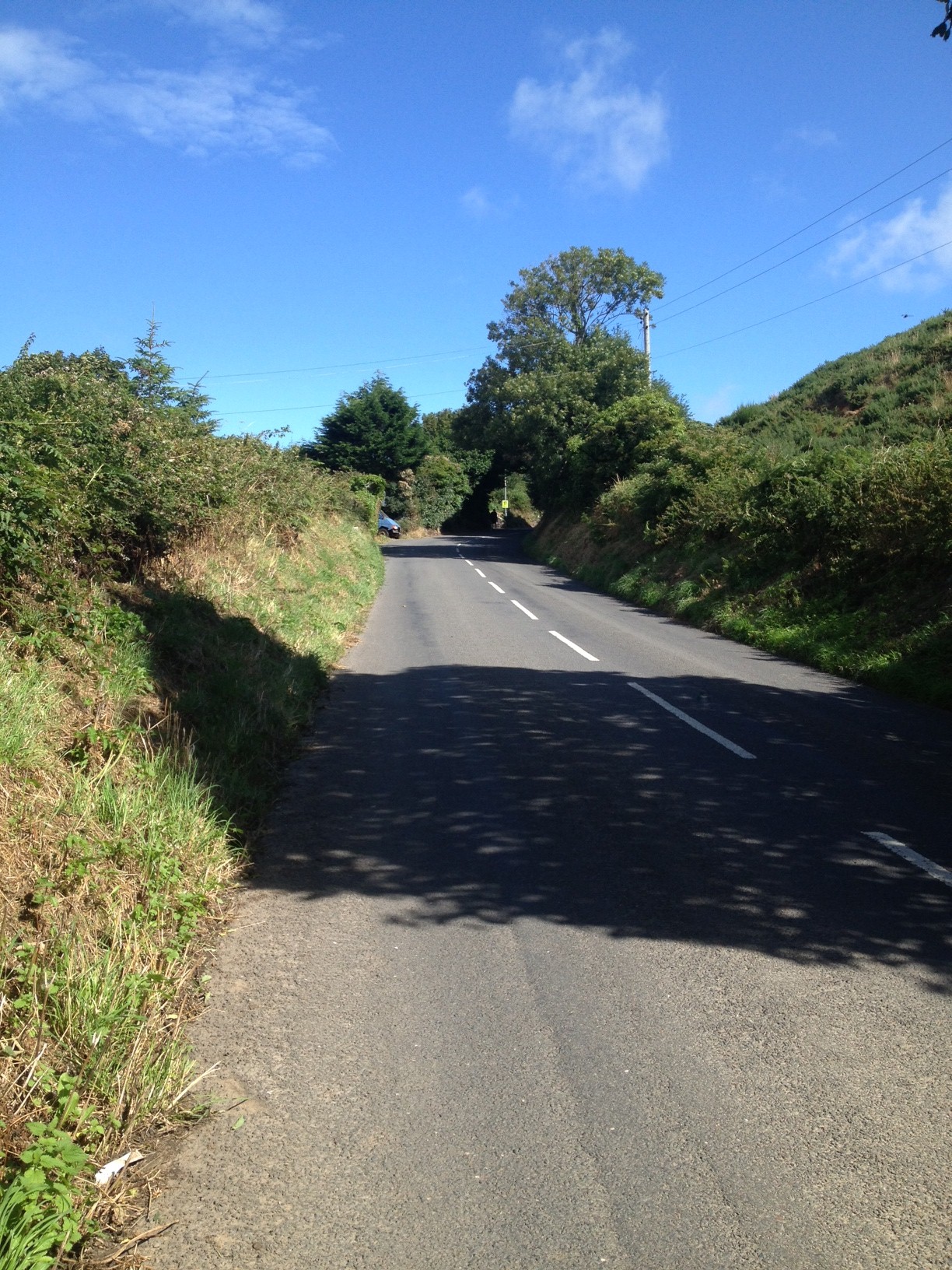 Beginning of climb at Mile 17

After a largely uneventful first lap the field had thinned out and I found myself on my own, going through the first half in 1 hour 40 minutes. Everything was going just grand until I felt that unmistakable ping in the hamstring at mile 15 and I came to an abrupt halt! Now what do I do? Quitting was not an option, not after 15 miles. I was in the hilly section coming up to the killer hill so I started to walk to see how the leg felt and to see if I could in any way “run it off” (yes I can hear you laughing from here!). I started a kind of jog, right leg basically straight, and found I could at least move faster than walking, at this point I thought I could still finish under four hours (stop laughing!!!). 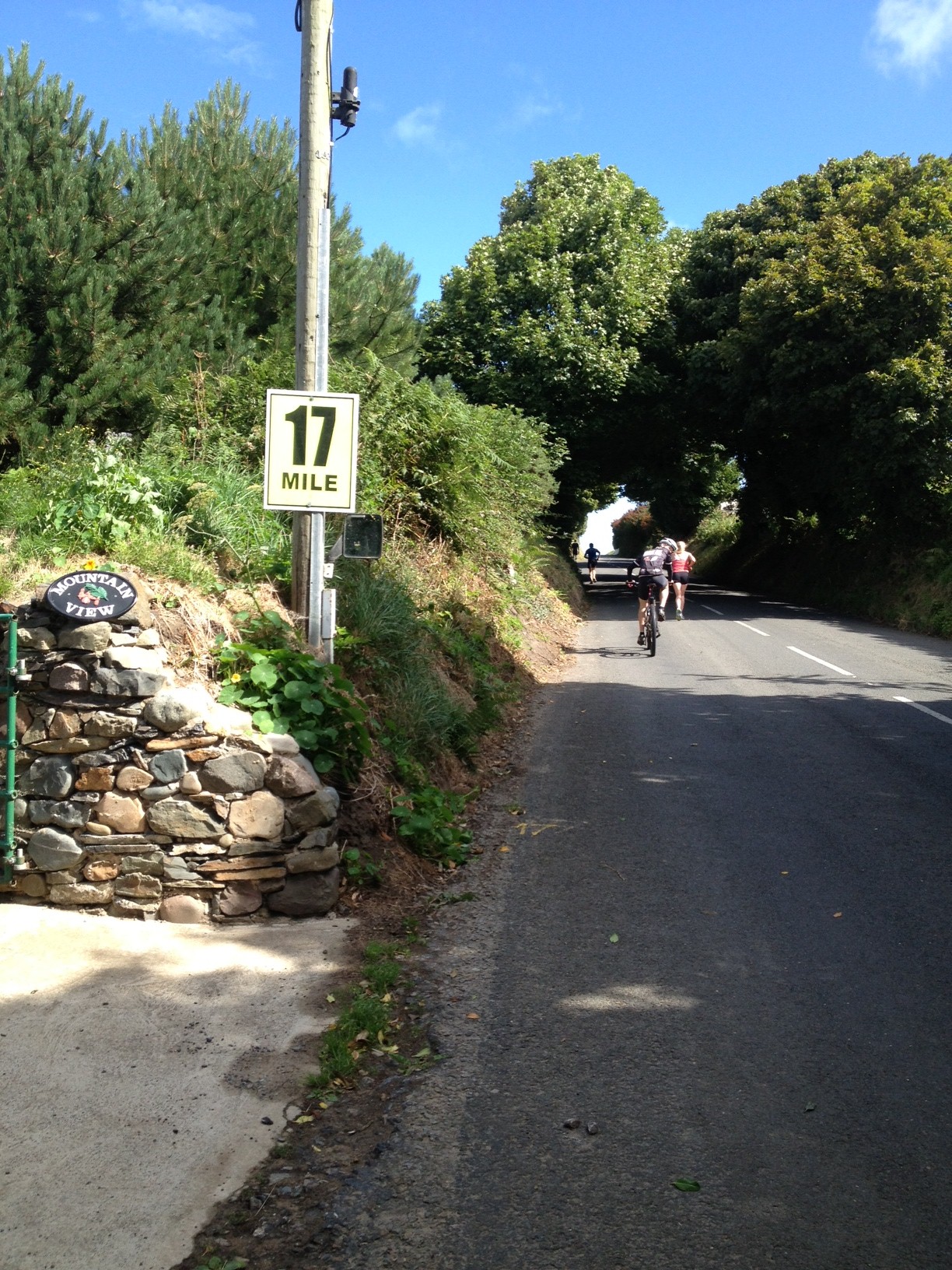 One female spectator did ask me why I was rubbing my butt cheek and then kindly offered to rub it for me; I suspect more in line with fifty shades than physio, judging by her accompanying dirty laugh!

At mile 18 I was kindly handed a mug of coffee by some old biddy who’s place we ran by, her house was at the top of a long straight and as I was on a walk break she saw me coming. Of course I couldn’t exactly take off with her mug so I stood and drank it and got chatting to her, no idea what her name was but the cuppa was a great boost.

My second very slow lap gave me a chance to stop concentrating on time, pace, gradient, foot placement and instead reminisce about my previous 49 marathons, all the places I’ve been, the craic with fellow runners and spectators, the highs of PBs and the lows of injuries, difficult travel arrangements, crap hotels and badly organised events. I feel privileged to have got the chance to do all of this, had supportive people around me and enough funds to pay for it all. Marathon running is a big commitment, and to do them month in month out for years does require focus and possibly a little insanity!

Finally I got to Ramsey, having spent what felt like an eternity out on the second lap, dragging my gammy leg round the course. I limped into the small stadium (think non-league football not Wembley) and was greeted with smiles and encouragement from friend and stranger alike, finishing in 4 hours 17 minutes. There was a decent finisher’s medal and technical t-shirt and the IoM Vet’s Runners Club put on a post-race buffet lunch that a budget wedding would have been proud of, all included in the entry fee.

Richard having completed the Big 5-0

With the award ceremony finished but the buses not going back to Douglas until the 6 hour official time limit was up, everyone stayed on until the very last person crossed the line; that was my new Italian mate who made it to the finish about 10 minutes before the 6 hour cut off. He got a great cheer from the main stand and took the line looking like everyone else, bloody thankful it was over.