I had been looking forward to this race for a while. 17 Miles of tough, high level Lakeland terrain with 6500ft of ascent. One of the toughest fell races around.
I popped over to the lakes with Colin Dilks and Dave Johnson (NFR) and, as usual, the banter was good. Excitement about the race was supplemented with an undertone of “What are we getting ourselves into…..”

We arrived in good time and collected our 40th Anniversary t-shirts and resisted the urge to get back in the car and head for the Pencil museum in Keswick. The fell running legend Billy Bland was handing out the shirts and when I said “a large.” He was swift to say “Definitely…..youre a big lad aren’t you. Do you pump weights……….”
So, I was happy to have, albeit briefly, met Mr Bland but I came away wondering if he had just called me fat……

Anyway, we got our kit on and stood around for the start. A nervous pit-stop and we were all ready. The race started and we were off!
The Borrowdale race has a circular route which rises to the roof of England (Scafell Pike 978m) and then drops down before the climb up Great Gable (899m) and then a mile long climb up Dale head (753m) to provide a sting in the tail. Not only does it climb these mountains, it also has numerous other mountains, killer descents and exposed sections.
The first section was bliss. We were walking within 100 metres as there was a bottleneck on a bridge. The walk continued for a short while until everyone fanned out. The next 2 miles were easy and flat until we came to the first climb. The next mile featured 1,117ft of steep ascent and took 27 mins. Towards the top I was using 4 points of contact. People were shouting “Below” as displaced rocks shifted downwards.
Over the top and more climbing to make the summit of Bessy Boot at 551m and the first check-point. Off we went down the fellside, the terrain was rocky and grassy. Going wasn’t exactly hard but the next mile was still a 14 minute mile. We were up on the ridge but the ground was undulating a lot. The path took us round the side of Glaramara and contoured the hill. At points the ground fell away steeply to the left and the path was reduced to virtually nothing in places.

I had been exchanging places with DJ for some time and I could see Colin wasn’t far behind and, as they are both veterans of this race, I was hopeful I could gain some advantage from them during the race.
I took my first gel and drank some powerade at around 5-6 miles in the hope of giving me a boost for the tough terrain to come. We skirted around Allen crags and came to Esk Hause at 750m. This was where the race started to get tough for me. The clouds were wisping around the mountains and the temperature dropped a bit. Hikers were putting on their jackets and gloves but the climbing kept it just bearable as we moved up onto Broad Crag. 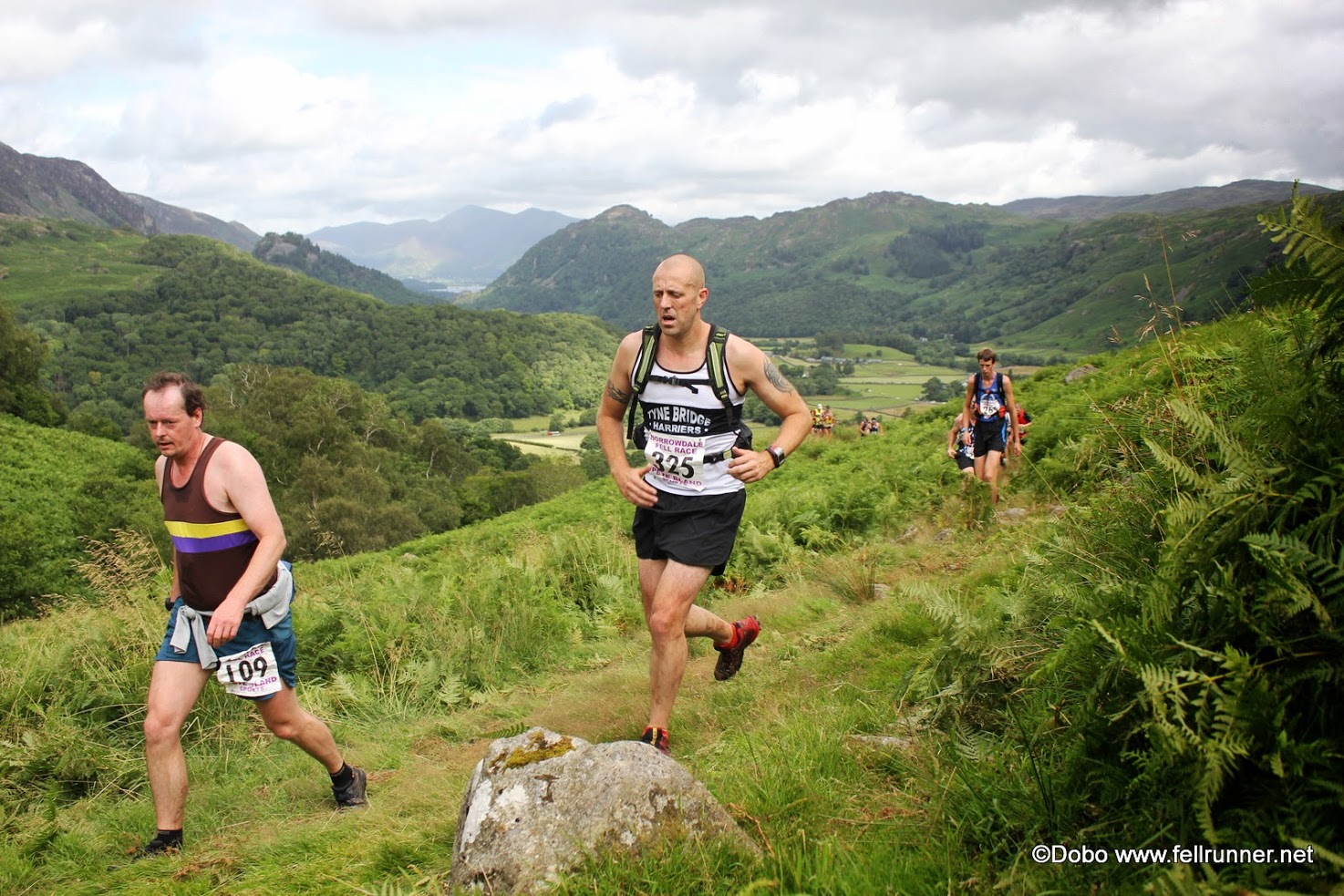 Alan in action (Thanks to Paul Dobson for photograph).

The terrain changed to boulders now and the pace dropped. Onwards into the cloud as we dropped down before the short, steep pull up to Scafell Pike. The roof of England! We were only there for a few seconds and it must have looked like we were plunging off the side of the mountain as we made our way to the legendary scree run!
Wow! How steep? Being a scree running novice I descended like a fairy and watched helplessly as DJ flew past me, not a care in the world. Once at the bottom I quickly realised I had stones in both my socks. I sat down and wasted 4 minutes taking care of them. By this time DJ was out of sight and I knew there was no way I was going to catch him. I lost a bit of momentum and then Colin caught me up along the corridor route, which also has some exposed sections where a slip could be disastrous.
Colin used his experience and moved ahead after I followed someone else but we were soon level pegging as we got to Sty head and the start of the tough climb up Great Gable at 899m. I sunk another gel and polished off some more powerade and we plodded up the monster. 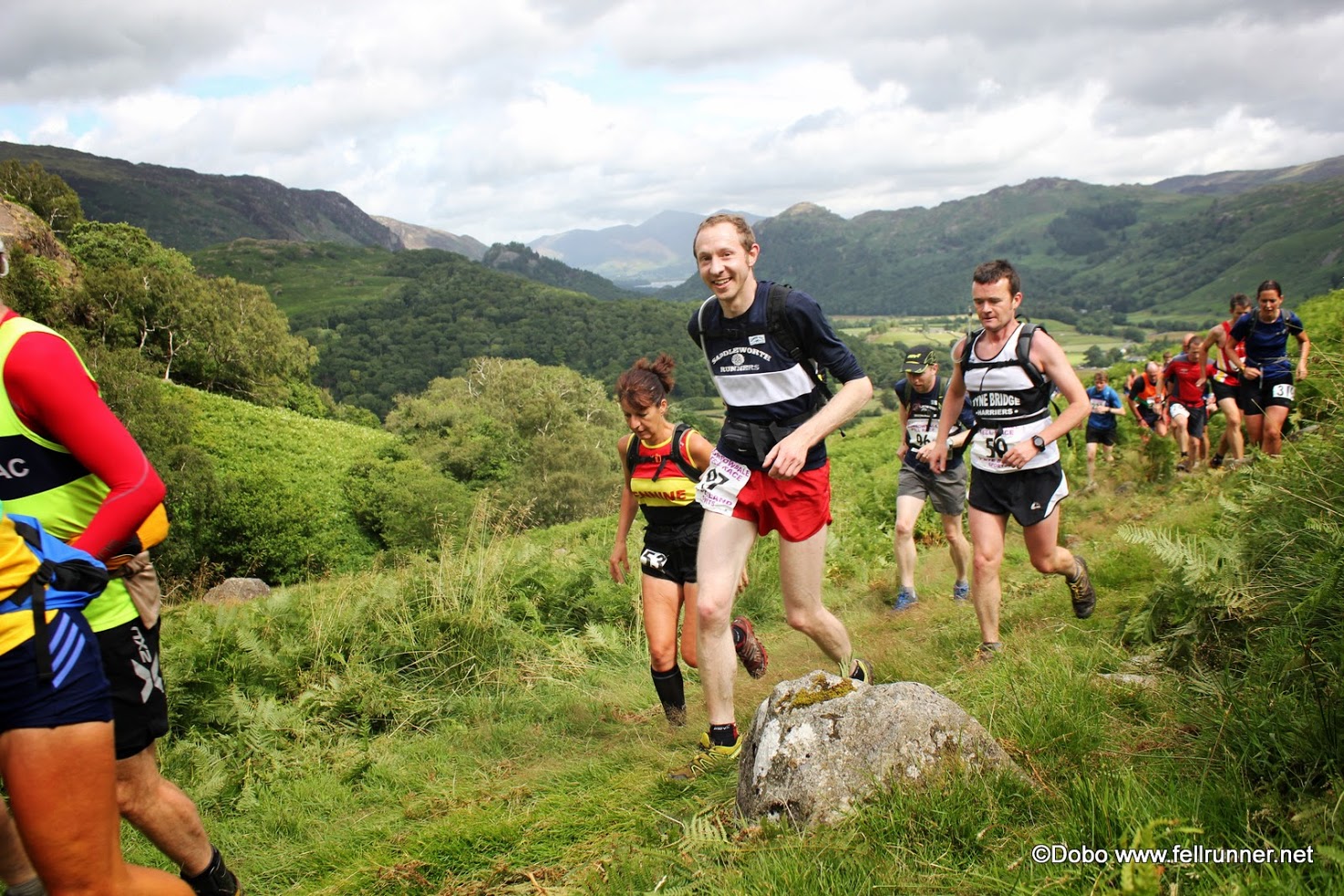 Colin in action (Thanks to Paul Dobson for photograph).

There are a number of checkpoints in the race but only one of them has a cut off time. We needed to be at Honister within 4hrs30. We had 1hr45 left to make it the 3.5 miles (including the climb of Gable).
I started to push on a bit and followed a guy who seemed to know what he was doing. I felt a bit stronger now and found new impetus in trying to make the cut-off. Eventually we made the summit in thick cloud and we were directed off to the right and plunged down the side of the mountain.

The going was tough and slow as the broken rocks and sharp bedrock threatened to end your run with every step. I managed to avoid the steep crags and made good across Windy gap and around the side of Green Gable. I looked back and could see Colin picking his way down above the crags and down.

My knee had started to give me jip coming off Gable and it got worse as we moved onto runnable, grassy terrain. Uphill was fine but downhill was hurting. Again we contoured a mountain and I was aware of steep drops to my right and spectacular views down to the valley floor. I gained some good advice from a guy and took a good line down to Honister with 30 minutes to spare before the cut-off.
What a relief! Just under 13 miles done and now I could enjoy the rest of the race without worrying about missing the cut-off.
Colin soon appeared at the water station and we started up the mile (and a bit) long slog up Dale Head at 753m. This was the tough one, the one which would make or break it. I felt good. I was feeling strong and, after my last gel and the last of my powerade I went for it.

Well, I say “went for it.” I was bent over, hands on knees and shuffling as fast as I could. I started passing people and must have made up 5-6 places as I made the climb in 24 minutes. I had a bit over 30 minutes to run under 3 miles in order to achieve my goal of under 5hrs. Unfortunately my knee kicked in as I took a poor line on the steep descent. I looked to my right and saw the people who I had just passed flying down the hillside.

Nevertheless I made the bottom and took off at a silly pace to try and salvage the sub5. I latched onto a lady who took the line that Colin had mentioned earlier and I followed her every step until the terrain was more grassy. I managed to get a good pace going as time ticked down.

I was sensing disappointment as I got down to the valley floor but then I noticed the NFR vest of DJ a couple of hundred metres ahead. This changes things! J
I managed to keep my pace up and came up behind him at the river. DJ took the stepping stones and I went straight through, passing him in the middle! I pushed on and somehow held on. The clock showed 4.58 and we finished seconds apart having probably helped each other under the 5hrs. Colin came in a few minutes after to complete the trio.
So we were done. A very tough race but very enjoyable and with a bit of fun thrown in at the end. My feet have blisters all over the tops of my toes and I introduced some new swear words into my house when I jumped in the bath. Other north east runners in the race were Phil Green (heaton/NFR) who finished in a spectacular 4hr7! And Andrew Callcott (NFR) who finished just ahead of me. There were others but Im not sure who.

We made good time back to Newcastle with some good debate and some light-hearted ribbing of DJ.

I’ll look back on this race as an epic adventure, the hardest but greatest race I have done. It will test your fitness, technical ability and, above all, your mental resolve. I am really happy I have been able to complete the race and follow in the footsteps of the fell-running legends in such a classic lakeland fell race.

If I never race again I would be content.

Permanent link to this article: https://www.tynebridgeharriers.com/2013/08/04/borrowdale-fell-race-2013/