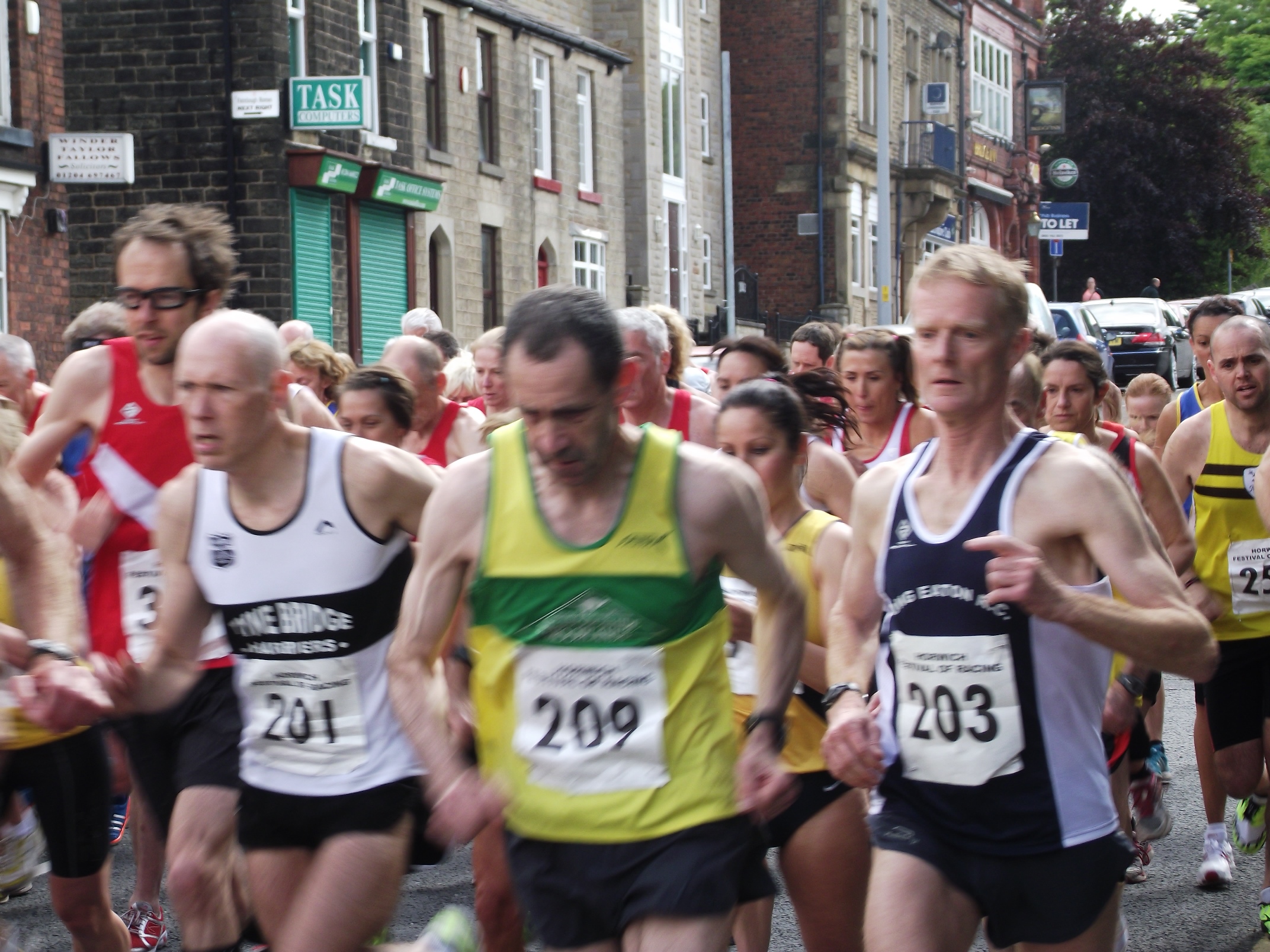 Having overcome disappointments at the Marathon of the North (mis-measured course) and the Clive Cookson 10k (fell inside the first 10 meters), Dave Moir was determined the British Masters 5k Champs would be his race. But would things go to plan on the day?

One comment that was made repeatedly both before and after this race was “160 miles is a long way to go to run just over 3 miles”, and that proved to be a fairly accurate statement.

Anyhow, a few of us oldies are looking to try and qualify for the British Masters cross country that Keith Smith, Kenny Mac and Paul Hilton did last year, and we have been told that the best way to do that would be to have good runs at this event, and then at the 10K championships in Glasgow later in the year. No one seemed that keen to spend 5 or 6 hours in a car last Sunday to get to the 5K championships except for me and Keith Smith, so after getting picked up at 7:00am by Keith off we headed down the A1 to Horwich, a little town near Bolton.

It took us about 2 ½ hours, and we got there in very good time to register, and warm up a bit. The town centre had been cordoned off, and a 1 mile loop had been set aside for the various events that were planned for the day. We watched some youngsters on racing bikes whizzing past as we were warming up, and I think it may have rekindled Keith’s interest in cycle racing slightly. I was hoping to hang about for the uni-cycling championships as I can do nearly a full 15 seconds without falling off and severely injuring myself, but Keith wanted to get away straight after the 5K so wouldn’t let me (and I didn’t have a uni-cycle with me). There weren’t many runners from the North East, but we met up with John Baty from NSP, knew Guy Bracken was around, and later bumped into Alan Wears (thanks for the photos Alan) with a trio of Jarrow ladies (Claire Simpson, Heather Robinson and Elaine Lesley) who had made the effort to travel down for the day. 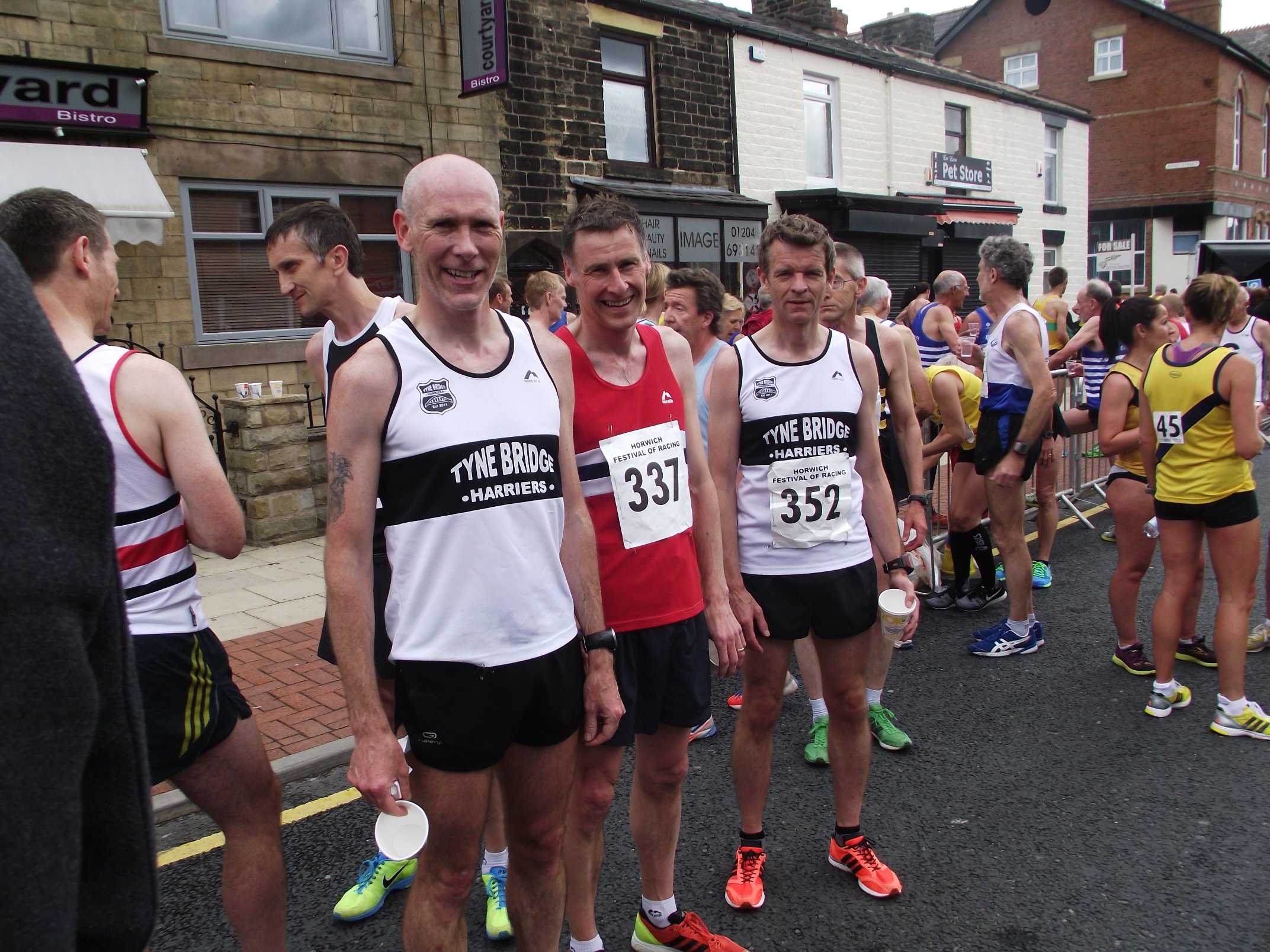 Rather unusually, the race organisers combined this event with the BMAF 5K walking championship, and set that race off 3 minutes in front of us. The start was fairly narrow, and not much warning was given so it became a little bit hurried. My main aim was to remain on my feet (rather than sprawled on the ground making a big fuss like I did at the Cookson 10K a few weeks back) so coming across a big group of walkers after a minute or so wasn’t ideal, but they thinned out for the following laps and it all went pretty smoothly after that.

The course as I mentioned was set out in mile loops in a square, with half of it being slightly uphill and half slightly down, the road was a very good surface to run / race bikes / unicylcle on, and it was useful to be able to see how you were doing on each lap. Both Keith and I got carried away and went through the first mile a little quick in 5:11 and we both suffered for it after that. John and Guy both pushed on and had fantastic runs with Guy winning the V50 age category in 16:11 (14th overall) and John posting a very good V45 time of 16:55

I ended up finishing in 17:29 with Keith a little behind in 17:53, but Keith hadn’t ran at all for several weeks due to injury (not sure what my excuse was so I’m stating it was due to the pressure of the unicycle race I thought I was going to enter that got to me).

The Jarrow ladies were well rewarded for their efforts and won the team prize in the V45 category with Sue Philips from Darlington making up the team of 3 for the North East along with Heather and Elaine.

Man of the match for me though goes to John Baty from the Poly. John and I spend most winters plotting and scheming against each other in order to outdo one another on the cross country, sometimes I win, then sometimes he does. John had a great run at Horwich and despite putting in a daft first mile along with the rest of us, carried on with the pace and was rewarded with a great time.

I think the main thing I can take away from this experience is the fact that 160 mile is a long way to go to run just 3.1 miles, but also the standard at these events is very high indeed. I was beaten by 2 V60 athletes (the legendary Mike Hager and David Oxland) and they posted times of 16:43 and 17:12 respectively. I came 49th overall and only 15th in my age category, but despite this, I still really enjoyed the race, and it was interesting to see what the BMAF events are all about.

Let’s have a few more TBH turn up for the 10K in Glasgow on the 18th August.

Permanent link to this article: https://www.tynebridgeharriers.com/2013/06/20/british-masters-athletics-federation-5k-championships-16th-june-2013/