All good things come to those that wait, as Alan Wallace will now explain.

Alwinton was mentioned at the grand prix on Tuesday evening and before I knew it I was bundling my gear (and myself) into the car on a bright Saturday morning to make the trip up into Northumberland. I picked up Jonathan Powell and Paul Turnbull on the way and, despite a diversion, we made it up to the small village of Alwinton.

David beech was already stripped and ready, having arrived a good 2 hours before kick-off.Registration was quick and the race fee was only £6. Bargain!

A small field of 44 gathered and off we went. Up a stony track and we were clear of the village and out onto the fells. The first few miles were undulating but the general direction was upwards. The sun was beating down on us and I was sweating (and running) like a donkey.

The field had spread out and my TBH friends were already out of sight. I settled into a rhythm of walking the uphills and sprinting the downhills. It’s tough hauling this great lump up those hills but gravity becomes my secret weapon on the downhills as I gather pace like a giant snowball.

I was playing cat and mouse with a few runners who were gliding past me on the hills but looking at the garmin and seeing that I still had 11 miles to go filled me with dread. Was I going to blow up after a few miles? We were running near the military area and I heard a couple of explosions in the distance. “That could be me in a couple of miles”.  The chance of an explosion grew increasingly likely as I gulped down the last of my fluid, a sickly mix of fizzy lucozade and Iron Bru.

Anyway, we contoured the forest and eventually the marshalls sent us off onto the moor. We skirted round the top of the trees and then into a short descent where I managed to take back a couple of places that I’d lost during a lazy spell.

Then the long slog up Bloodybush edge at 610m. The going was rough, with a lot of peat bogs and tufts of grass. Leaping over the boggy bits took a lot out of the legs and the fact that it was being done uphill just made it worse. I lost places again.

We dropped 100m and I flew down on the spongy ground, making my places up and gaining some good ground on the others. Then there was another long pull up to the summit of Cushat Law at 615m. Once at the top I made my move and went off down the steep descent, only to find it was hard going and rough with lots of potential for a twisted ankle.

Nevertheless I had created a gap of maybe 100m as I made the forest track at around 9 miles. I wasn’t really taking much notice of what I was doing as I flew down the track. I could see a NFR runner a couple of hundred metres ahead of me and so I tried to catch him. I checked my watch and saw that Id ran the last half mile at sub 6min/mile pace but I still had 5 miles to go! Oh dear. Something’s got to give! Unfortunately, it was my legs.

I managed to sneak past the NFR guy and gave myself a gap of a couple of hundred metres or so but I was still sweating and out of fluids. We were belting down a track through the forest and there was a fast flowing stream running adjacent to it. The descent seemed to go on forever and my 6.15 min/mile was replaced by an 8.30 min/mile.

I slowed to a walk and hopped into the stream. WOW! Lovely and cold. I took a few drinks and splashed some onto my face. I climbed back out and noticed the NFR guy coming around the corner so I set off again. My legs were empty and I took a few walks. Luckily we came to a small incline which, at this stage of the race, most people around my position would walk.Saved by the hill!

I managed to force my way to the top and belted down the track on the other side to a water station. I took two cups of water in and then started up the side of “the last hill” which was half a mile long and 200ft of climbing.

Looking back I could see 4 runners tailing me up the hill. I started sprinting up the hill for 10 seconds then stopping, taking two breaths, walking a few metres and repeating. I managed to hold them off up to the top but then I had to wait to ask one of the guys which direction to go as there were 3 possible routes (and my map was wrapped up in my pack). He kindly told me the right way before he caught up to me and I set off down the hillside.

Eventually Alwinton came into view and I stepped up the pace down the same rocky track that I toiled up 2 hours previously. I managed to hold my position and rolled in at 2hrs 15.

I’ve never been so exhausted after a race and couldn’t speak for a while as I sat with my feet in the stream.  Last week I was the first TBH home and this week I was the last home but today I had worked a lot harder.

First home was Paul Turnbull in 4th Place and he picked up the 3rd senior male prize. Next in was David Beech who finished in 6th position and also picked up a prize. Then came Jonathan Powell in 14th to make up the TBH team. Unfortunately the team prize was won by NFR, only 1 point ahead of TBH. I have to say what a great performance this was by the first 3 TBH lads. We are getting a good reputation out on the fells and people are taking notice.

We hung around for the prize giving as Paul knew he was getting a prize, a splendid Alwinton fell race mug. So he collected his prize with a smile and we applauded each of the other prize winners. What happened next is a bit of a blur as I heard my name mentioned. Turns out the old fart had won the 2nd v40 prize!  My first prize in 4 years of running.

Anyway, this was a great race. It is tough and long but there are no real technical sections. The race was well marshalled and well marked. At £6 it’s not going to break the bank and the scenery is stunning. Everyone is very friendly and it is well organised.

Now Im off to make a cup of tea in my lovely new mug! 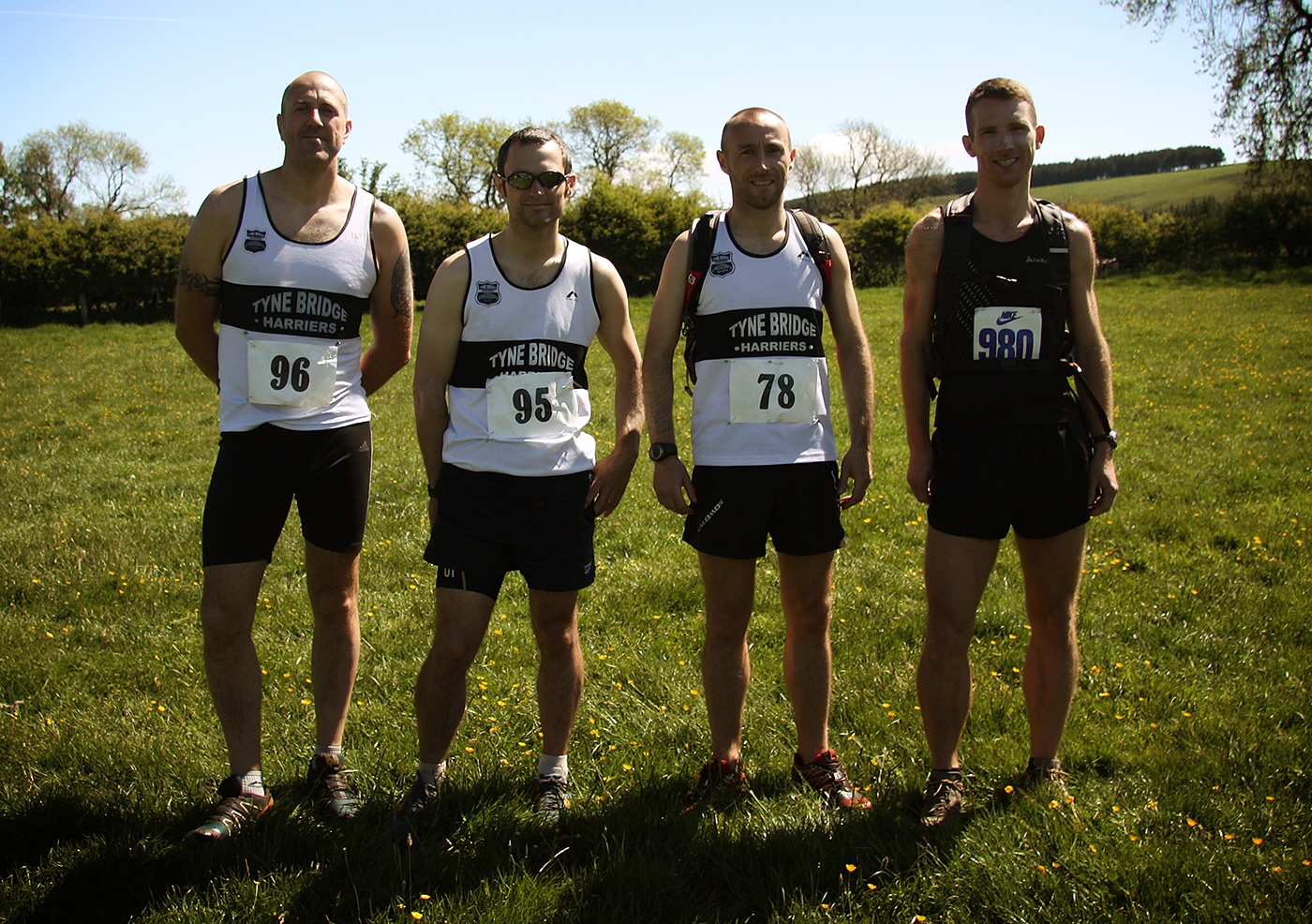