This weekend, Edinburgh played host to the annual Edinburgh Marathon Festival. Two days crammed pack full of races, ranging from 1.5K for junior’s, up to a full Marathon.  Always well supported by the club in the past, this year was no different, with over a dozen members taking part in either the Half or Full Marathon races.

First up, a Half Marathon report by yours truely.

Hi, my name is David Daniels and here are a few things you might like to know. Following a few years of mediocre running results I had high hopes that 2013 would be my year. By the time January 1st 2013 had arrived I’d already entered 12 races for the first half of the year, convinced my performances would improve as the year went on. But as we all know, things don’t always go to plan, with race cancellations, illness and injuries conspiring to wreck my early hopes.  Could the Edinburgh Half Marathon be the turning point of the year?

With the half marathon starting at the ungodly time of 8:00am on Sunday morning, I had a choice to make. Book an overnight stay in Edinburgh or set off from home – at the even more ungodly hour of 5:00am – to arrive in Edinburgh in plenty of time for the race.  Preferring the comfort of my own bed (and being somewhat of a tightwad) I opted for the latter and set out a plan of waking at 4, having a light breakfast and then leaving at 5 for the 2 hour drive to Edinburgh.

That plan quickly disappeared however when I woke at 4:45 and spent the next 15 minutes frantically dashing around getting ready and chucking together an ad-hoc breakfast for the car journey. What did I say about best laid plans?

If waking up late wasn’t bad enough, I was also suffering from a bout of depression from the night before but it’s amazing what a clear road and listening to some decent tunes can do for the soul. Two hours later I was in Edinburgh, feeling fresh as a daisy and looking forward to a great day of racing.

Dropping off my bag at the baggage buses, I made my way to the starting pen and met up with fellow TBH’ers Kevin Cheetham, Rob Kirtley and Andy Harrison. We wished each other all the best and then set about with our pre-race warm up routine. Mine consisted of standing in line for a port-a-loo for 15 minutes!!

By the time I’d finished my ‘business’ the race was already underway and I quickly joined the thronging masses crossing the start line. Knowing a PB was out of the question I made the decision to treat the race as a threshold run and targeted a pace of 6:25 throughout the race.  The first mile was fairly congested – I lost count of the number of times somebody would cut across me trying to save a second or two by keeping to the racing line – but eventually the field spread out and by the time I reached Meadowbank Stadium (about two miles into the race) things had settled down and I was cruising along.

One (perceived) advantage of starting a half-marathon at stupid o’clock in the morning is that all runners will have finished the race well before temperatures get too warm. But as the early cloud cover dispersed, and the sun began to swathe Edinburgh in warm sunlight, it soon became apparent that the day was going to be a scorcher. It hadn’t even reached 9 o’clock but I could already feel the heat beating down. My thoughts immediately went to the marathon runners setting off a few hours later and having to contend with the warmest part of the day.

Although the miles were ticking by, the effort level was also rising and it was a relief when I reached the 11 mile marker and the route turned back towards the finish. Watching the runners on the other side of the road helped take my mind off some of the discomfort and it was also heartening to spot (and hear) John Tollitt, Vicki Deritis and Sinead Coffey on the sidelines, cheering and supporting the runners. 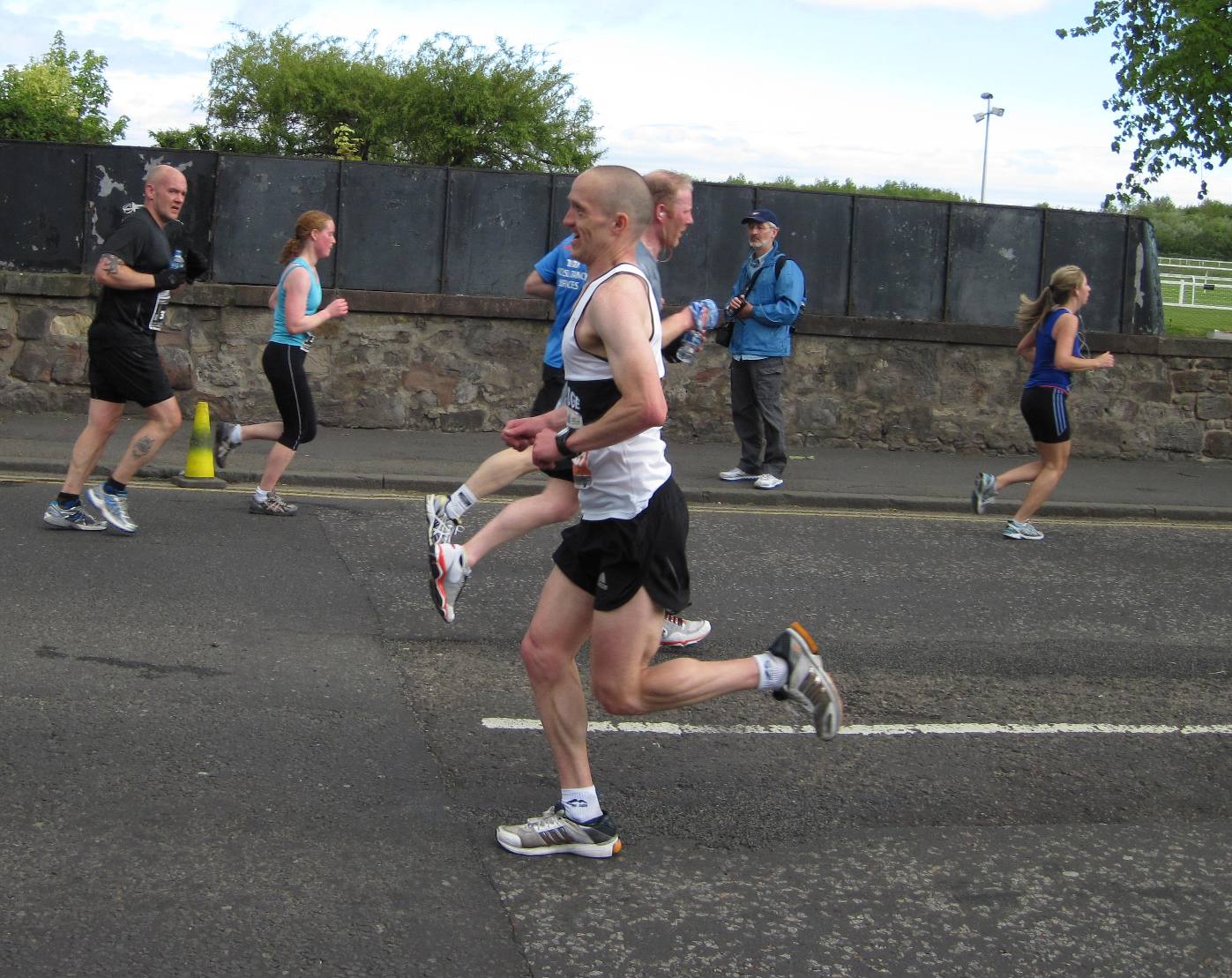 Turning into the home straight, I caught sight of the race clock which was coming up to 1:25. I would be happy with sub 1:25. Sprinting (ahem) to the end I stopped my watch as I crossed the finish line and was slightly taken aback when I read 1:23:24. I’d forgotten I started the race late doh!

Meeting up after the race, it was a case of mixed fortunes for Rob and Andy, as Rob’s time of 1:43 was under his pre-race target of 1:45, whereas sadly for Andy, a stomach bug forced his retirement at nine miles.

The Edinburgh Half Marathon is an awesome event, well organised, plenty of scope for running a PB, great goody bag (medal, t-shirt, energy bars, bottle of water and that all important sachet of hair conditioner) and I’ll definitely be back next year gunning for that PB. 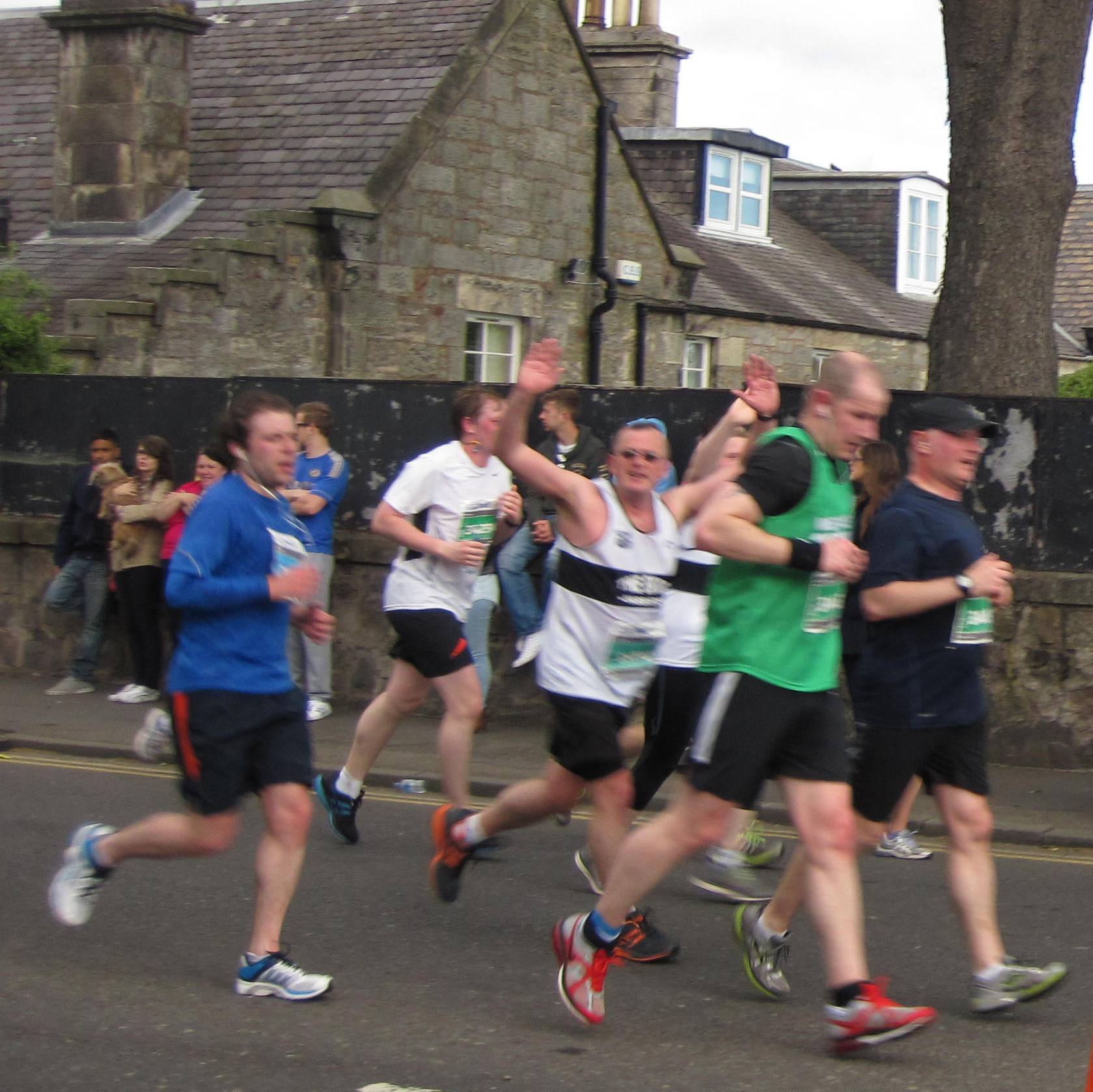 Permanent link to this article: https://www.tynebridgeharriers.com/2013/05/27/edinburgh-marathon-festival-25th26th-may-2013/