Before Christmas, I was having a think about how I might mark my 50th birthday this year. After toying around with various ideas (a Bob Graham Round, running 50 miles…), I came up with a cunning plan to do a race up the biggest mountains in England, Scotland, Wales, Northern Ireland and the Irish Republic. I thought that this would be a nice way of spreading my half century celebrations out over the year, and as luck would have it, the last of these races (Scafell Pike) would take place on my birthday.

So Saturday morning saw me up with the lark being chauffeured by Robinson Chauffeur Services to Newcastle Airport by my events manager; Vicki, and catching the early bird flight to Belfast. I met up with Tony Carter at Belfast bus station. I had mentioned my plans to TC before he went over to take up a job in Dublin and he had fancied having a crack at the fell running lark. I filled TC in on all the TBH gossip on the bus down to Newcastle, Co. Down, where the race starts, as we checked out the somewhat ominous looking weather conditions.

Approaching Newcastle, the cloud lifted and the impressive bulk of Slieve Donard and it’s close neighbour Slieve Commedagh came into view, appearing to rear up out of the sea. Within minutes of getting off the bus, the weather turned from bright sunshine to torrential rain, a pattern which was to alternate throughout the day. 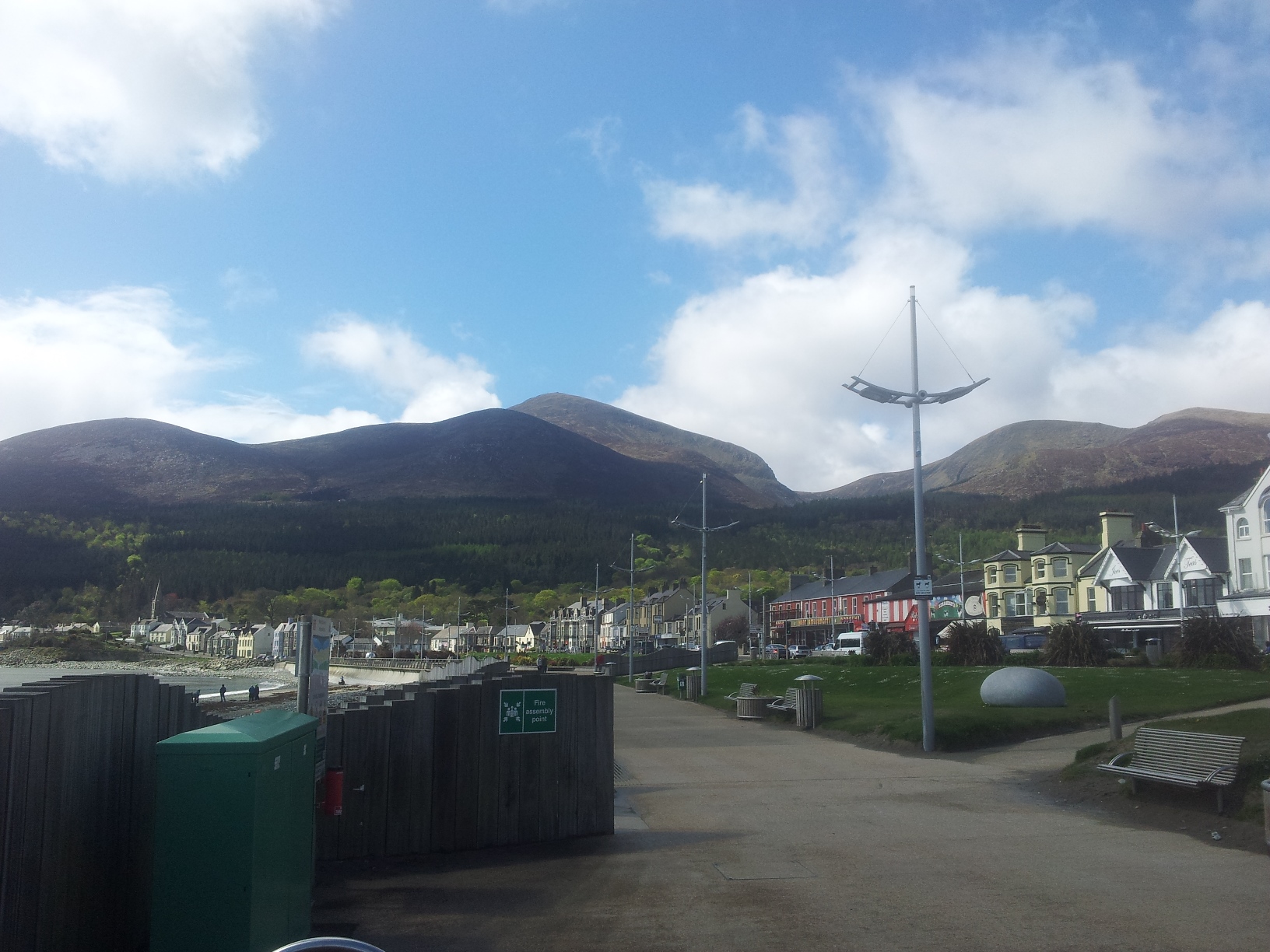 Having located our respective digs, we met up to register at the leisure centre in the middle of town and picked the brains of a few locals on the best way to approach the race. There was no set route as long as you make it to the 852m. summit and back. The more direct route involved negotiating the Black Stairs; a craggy scramble, whilst the longer, but more straightforward option involved heading up to the saddle between Donard and Commedagh. TC was more inclined to take the longer route whilst I was tending towards  the route one approach.

After a brief pep talk from the race organiser, the police closed off the road and we set off to the sounds of the Rocky soundtrack with TC taking pole position on the limited amount of flattish runnable road. A sharp right turn took us through a car park and into an ascending stretch of woodland. I tried to tuck in with a pack of yellow and red clad Newcastle AC runners, assuming they would know the terrain and best lines to take. Emerging from the woods, it was time to choose whether to continue following the stream up to the saddle, or cross over and head for the Black Stair. I chose the latter and assumed TC had gone for the former as I couldn’t seem him ahead. As the gradient increased, running turned to hands on thighs walking and then turned to all fours scrambling as I negotiated the slippery, craggy Black Stair. Brief glances behind showed that we had already gained considerable height as the charming seaside town of Newcastle appeared below. Glances ahead showed a heavy shower blowing in from the right hand side. I was glad that I had obeyed the instructions to carry full body cover, as my waterproof came on to protect me from the ever nearing rain/snow/hail flurry.

I was hoping to qualify for a prize that was given for reaching the summit within your age in minutes (i.e. under 50 minutes) but a glance at my watch showed that I had failed to start it (doh!). A large cairn came into view, which I thought was the summit, as the leaders passed by on their descent. However, it was not to be as the true summit was somewhat further away. By now the side wind had really picked and it was starting to become difficult to keep your balance and keep a steady line but at least the snow had stopped! On reaching the actual summit I revealed my race number to the hardy band of marshals braving the elements and started my descent. The going was a mixture of boggy turf and stony patches, which combined with wind meant concentration was vital to avoid taking a tumble. I was also concentrating on keeping the posse of yellow and red runners ahead of me in my sights, as I knew that taking a wrong line down could lead me to the top of a crag which would be bad news. A marshal with a walkie talkie alerted me to the fact that I had returned to the Black Stair which felt a lot more exposed and steep than it had on the ascent. A nice, fast stretch of grassy descent where I managed to make up a few places brought me back to the river crossing and then the descent through the woods. Descending through woods is what I most enjoy; narrow tricky winding tracks with all manner of obstacles to negotiate and they were all here on this route. I found my way onto a broader vehicle track which I didn’t recall from the ascent and so I was quite pleased when a local runner overtook me allowing me to follow his route. Passing through the car park and then onto the main street where there was quite a crowd to cheer us on to the finish where, bizarrely, we were given a bottle of milk and some ground almonds.

There was no sign of TC at the finish but he soon arrived looking somewhat bloodied after taking a tumble on the descent and having taken the longer route both on the ascent and descent. Having nipped into a chemist to get some bandages to patch up his wounds, we felt it would be wise to retire to the warmth of O’Hares Bar to avoid any risk of catching a chill. This was a wise move as we were able to get the plum seats next to the blazing log fire and a good view of the presentation that eventually took place. As this race was the first in the All Ireland Championship an array of impressive trophies were lined up for various categories along with an impressive spread of sausages and chips that kept on appearing which made a fine accompaniment to the ale. I mentioned to one of the runners how it was handy to have a decent pub for the post race niceties but apparently that is the number one priority in Ireland; i.e. find a decent pub and plan a race around it.

The first man home of the 138 starters was Ian Bailey of Newcastle AC finishing in an impressive 57.01 having reached the summit in 39 minutes. I was 44th in 1.14.31 and summited in 49.30 (having being one of 20 to make the age challenge). Tony finished in 66th in 1.19.55. However, he was impressively 29th to the summit in 48.08 on his inaugural fell race having taken the longer route. Neither of us came away empty handed as we were both given a box of chocolates for being the competitors who had travelled the furthest. At the moment the chocs were being handed out I didn’t think that that was the right time to mention that TC had only come from down the road). Also, as a nice touch, one of the organisers gave me a running cap as he’d heard of my planned challenge. I must say that the people in this part of the world are some of the most friendly and accommodating that I’ve come across, so big shout out to Newcastle AC. (Further information about the race and a set of results can be found on the Newcastle AC website). 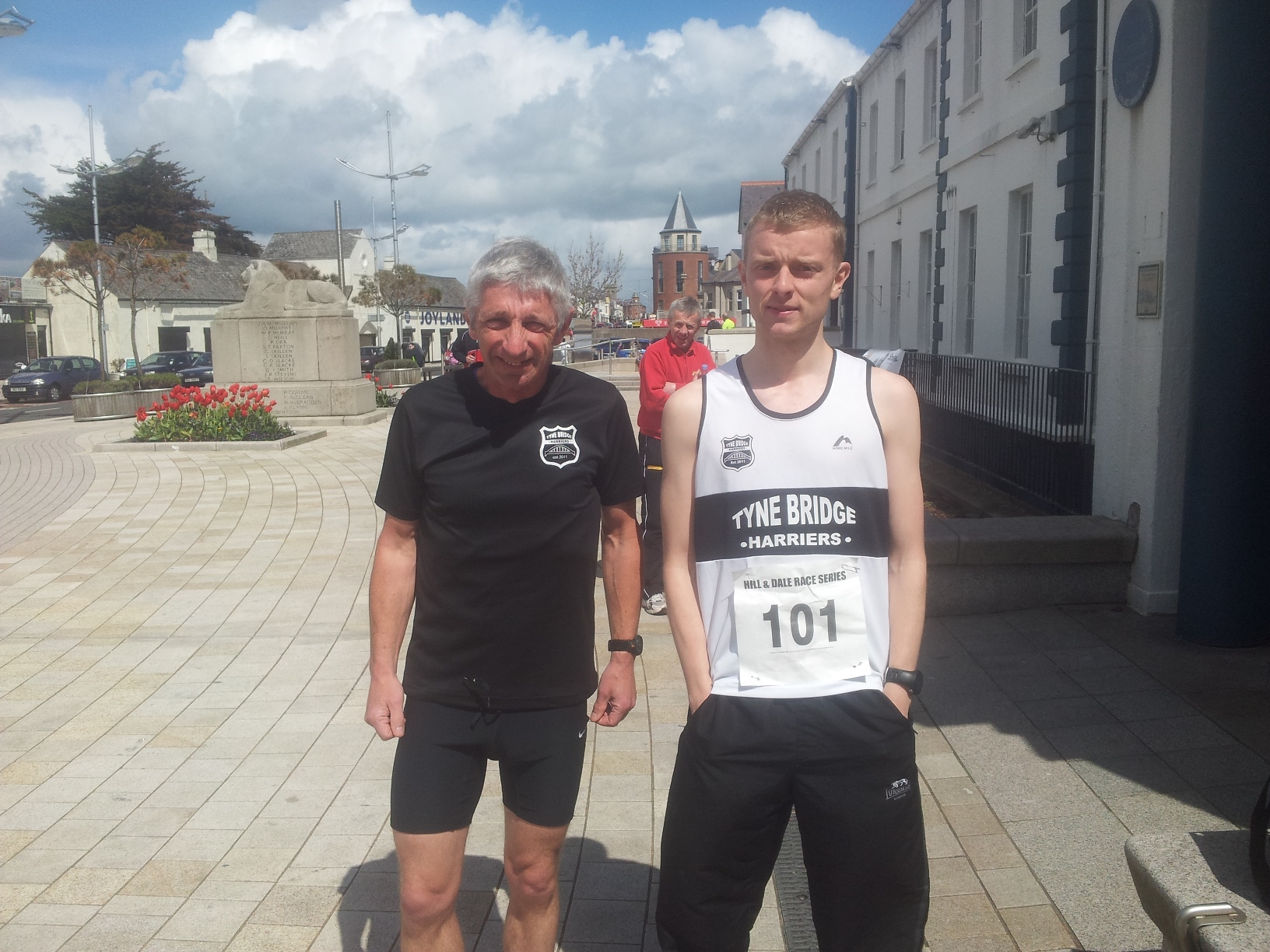 Next up is Carantoohill in County Kerry on 2nd June. Watch this space for chapter 2.

Permanent link to this article: https://www.tynebridgeharriers.com/2013/05/13/slieve-donard-mountain-race-11th-may-2013/