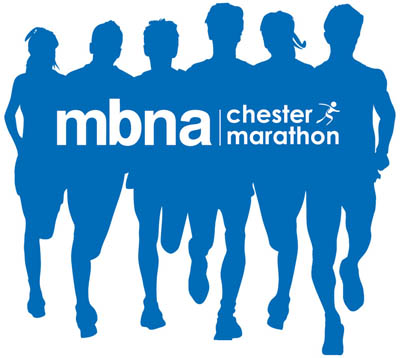 Many, many congratulations to Jude Smith on finishing her first marathon.

Completing the scenic course in 5h 17m 35s, Jude was the only TBH member to start AND finish the race after David Daniels had to withdraw after 18 miles due to severe stomach cramps. Sadly, David Moir failed to start the race due to a chronic chest cold.

One up for the lasses

A few months ago, Dave Moir asked whether I fancied running the Chester Marathon with him, and in a moment of weakness I said yes. Although having my arm twisted behind my back may also have played a part in agreeing to his request.

With myself driving, and Dave and John McLeod (Wallsend Harriers) as passengers, we set off on Saturday afternoon and spent the next few hours either chatting about our marathon experiences or listening to the football commentary on the radio. All the while Dave secretly praying I wouldn’t pop in my latest CD medley of Disney/New Romantics/Film Soundtrack hits. Arriving at Chester, we dropped off John at his digs for the weekend before Dave and I made our way to our hotel situated next-door to Chester racecourse, which handily was also the start/finish location of the marathon.

In the evening, Dave and I met up with fellow marathoner, Andy Bell from Heaton Harriers, for the prerequisite pasta meal before returning to our hotel room and retiring for the night.

We awoke the following morning with a feeling of despondency. Dave’s slight head cold from the previous day had overnight developed into a chronic chest infection and there was no way he could run the race without making the situation worse. Which just left myself. But as the whole purpose of my run was to help Dave achieve his goal of running under 3-hours I immediately lost all sense of motivation and was in two minds whether to run at all. Thinking how I would react if the roles were reversed I finally decided to run and proceeded to get ready.

It was 7:30am at this point, and from our hotel room window we had a bird’s eye view of the racecourse, and could see athletes already arriving for the 9:00am race start. There was a touch of fog lingering around the course, but with clear skies and the sun slowly rising, you just knew that conditions were going to be ideal for running.

Because of the early start, I decided to skip my usual breakfast routine of two slices of toast and (BIG) bowl cereal and instead opted for an energy bar and banana, reckoning I would top up my energy levels with the water, sports drink and energy gels being handed out along the route.

With twenty minutes to go, we checked out the hotel, put our bags in the car and made our way to the race. And straight away things started to go awry. The racecourse was sodden, and with thousands of people trampling all over the place, this meant most of the ground had turn into a quagmire. My white trainers would never look the same. As for poor(ly) Dave, when he asked the organisers if he could defer his race number until next year the reply was a big resounding NO.

After a lengthy (and loud) pre-race speech by the Town Crier, the race got underway and the runners first had to negotiate half a lap of the racecourse before making their way onto the streets of Chester. The original race plan, devised by Dave Moir, was to run the first half of the race at 6:40 mile pace, the next ten miles at 6:50’s and then see out the final stretch of the race at whatever pace we could manage. So, despite running on my own (metaphorically speaking), I decided to stick with the plan. The first mile was 6:47, not too bad considering the boggy start and congested pack of runners, and this was followed by a 6:28. But I wasn’t feeling it, the buzz, and the flow of adrenalin as you set off in a major race.

Just past the two miles marker I noticed Dave in the crowd and stepped from the race to stand next to him. “I can’t go on, I’m just not in the mood”. I said. “Don’t be so bloody ridiculous and just get on with it”. He replied, or something along those lines.  So with that verbal kick up the backside I resumed running and rejoined the race.

Leaving the town centre behind, the route took the runners through the picturesque Cheshire countryside and it took all my effort to concentrate on the race rather than the beautiful scenery we were passing. And the good atmosphere was heightened even further by the great support from the locals as the route went through several small villages. The miles began to tick by, 6:33, 6:31, 6:25, 6:27, 6:57 (including a pit-stop to ‘water the flowers’), 6:32, 6:27, 6:25, 6:31, 6:35 and 6:39. At this stage of the race we were approaching the halfway point, and I crossed the timing-mat in 1h 26m, a full minute ahead of schedule, even in spite of my earlier toilet break. Things were looking rosy.

Mile 14 in 6:35.  Mile 15 in 6:39. But then, within a matter of seconds, it went horribly wrong.  I suddenly had the feeling that the bottom of my world was about to collapse. Luckily there were some portaloo’s about half a mile further up the road so I gingerly made my way there and waited until one became vacant.

Back into the race, and after a quick look at my watch I calculated I had to run the final eleven miles in 78 minutes to get under 3 hours.

Fearing the worst after my excursion to the portaloo I was pleasantly surprised when Mile 16 registered 9:54 on my Garmin. And surprise turned into delight when the next two miles were recorded as 6:51 and 6:56, both under the necessary 7:00min mile pace. But then disaster struck. Having just ascended the steepest climb of the race I began to get the same stomach rumblings as before, and despite walking for short spells and paying a visit behind a hedge, there was no let-up in the pain.

Having experienced a similar situation in this year’s North Tyneside 10k race I knew there were only two solutions left open to me.  Either walk to the next water station and wait for the ‘Sweep’ bus to pick me up, or walk the remainder of the race. Approximately 8 miles would take roughly 2 hours to compete. But then, before deciding whether or not to walk the entire way (and have Dave wait an extra hour or so), I heard a vehicle approaching from behind and saw it was a council wagon working on behalf of the race organisers. I quickly flagged it down and asked the driver if he was heading back to Chester. As soon as he said yes I climbed (rather delicately) onto the back of the flatbed truck and hitched a ride.

The journey back to Chester was full of mixed emotions. Relief that I wasn’t suffering anymore, but an even greater feeling of sadness I wasn’t going to complete the race. I also used this time as an opportunity to tear off my race number. Simply not finishing would hurt, but having others think I may cheat in the race would hurt even further.

I met up with Dave, told him my sad tale and we quickly made our get-away from Chester. Admittedly, the drive home began as a sombre affair but soon perked up once my medley CD was put on. Ca Plane Pour Moi anyone?

Thanks to Dave and John for the company during the car journey, and to Andy for showing Dave and I the delights of Chester Town Centre on a Saturday evening. We walked from one side of town to the other in about 5 minutes.

Permanent link to this article: https://www.tynebridgeharriers.com/2012/10/07/chester-marathon-7th-october-2012/