Or for younger readers, That Was The Week(end) That Was.

Tyne Bridge members were involved in several events over the weekend, with the first race report coming from Alan Wallace.

I was caught off-guard a few weeks ago when reading Louis Goffe’s article on Fell running.  I didn’t realise at the time but he was using some kind of word manipulation trick and before I knew it I was bundled into a car on Saturday morning for the trip to Kielder.

With John Tollitt at the helm, Vicki Deritis on navigation and Colin Dilks for company, the chatter was good and we arrived in plenty time for Vicki to settle in for her role in registration. We registered quickly enough and headed off back to the car with around two and a half hours to kill before the race at 2pm.

John suggested a quick recce of the course as it seemed a bit complicated from the photos of the course so we set off for a jog and gained some good insight into the state of the terrain and the route itself. We took in a couple of the fast downhill sections and I took it cautiously, trying to remember where obstacles were and where I would be able to build up some speed.

On returning from the recce in good spirits we went past the starting area. I was shocked as I saw some wild antelope, springing around the field without effort. I rubbed the sweat out of my eyes and I realised it was the other athletes! The race was part of the English Fell Running Championships and had attracted the top fell runners in the country.

The ladies race started at 1pm and as we gathered to watch the start Louis arrived and then the lone female Tyne Bridge Harrier Claire Rowley appeared and took her place in amongst the very capable field. I commented to Colin that I would feel very intimidated starting in that group. Off they went and we made our way back to the car to get changed.

Before we knew it the time came to gather at the start and around 160 blokes took off their jackets, sweatshirts and took their places. John mentioned that another TBH, Simon Kristiansen, was there to make the THB presence up to 5, although Louis and John would be sporting their NFR colours today.

Just before the start the 1st female came in under 1hr to great applause from the men.

Off we went and the field spread out quickly as the faster runners jostled for position across the first flat section. I’m not that experienced with fell running but I get the impression that it’s a case of getting to the first hill as fast as you possibly can.

Across a small bridge and we were straight into a long and steep climb. The trail had been nicely churned up by the ladies and was tough going with slippery mud sapping your energy. There was a bit of a false summit as the path levelled out but within 10 seconds we were climbing again, bent over, hands on knees. This was where the earlier recce started to pay off. I knew where the course stopped climbing and I started running before the top of the climb, knowing the course was downhill for a few minutes after this.

We turned right onto a grassy, boggy section with lots of uneven ground. I mentioned to Colin during the recce that I’d found a little easy running section here but I missed it and Colin remembered!

We were now into the trees and a fast descent began. Everyone seemed to be flying down this section and I soon found myself travelling at a crazy speed. My eyes were watering and I was trying to wipe them with my forearm whilst keeping my balance and not running into a tree. The terrain was a mixture of soft, bouncy mossy stuff and boggy, stinky, slippery stuff.

Once again the recce came in handy as there were a couple of ditches at the bottom of each descent. The first one I was prepared for but the second one I lost my footing and went flying. Straight up again and off along a short section on a track. Around this point I flew past Simon as he hobbled out of the entrance to the next downhill section. Louis later mentioned that he had pulled out after his Achilles had went. Looking at the video he was in 6thposition going up the first hills so he must have been absolutely flying at the start.

With the descent over we headed off to the left along an undulating trail for the start of the second, larger loop. At this point I made what some people would call and error. I looked back…..

I remember reading something Kenny had said – “Never look back in a race or you’ll turn to stone”. Well, I didn’t turn to stone but my legs certainly felt like lead as I looked back to see Colin just behind me.

The trail turned onto a long fire break in the trees. This was a long uphill section and everyone was walking, hands on knees. Up through the grassy, boggy stuff I looked back a couple of times and each time I did I wished I hadn’t.

Eventually I reached the top of the firebreak and I made a break for it as the course levelled out a bit. Before long though the hills returned as we went back into the trees. Once again we came out into a firebreak and headed upwards towards a Fire tower. Surely this must be the top? My heart sank as I crested the hill and could see another long hill and a stream of runners going up.

I passed a few runners on the way up the hill as I put in some hard work knowing there was a good descent to come. Eventually I reached the trig point at the top and had a quick breather. Off I went again and I passed Colin on his way up and another friend of mine Glen. Both of them experienced fell runners and I figured it was now or never for me as I was sure they would both be after me on the descents.

I’m quite a safety conscious person but I have become quite interested in this fell running lark and there is much talk of letting yourself go on the descents. So that’s what I did and I launched myself down the hill. I came up behind an NFR runner and just followed his feet, but taking a different footing when his feet went into the bog.

As we raced down the trail the runners were stepping off to the side to let us through and it felt great. Back up another hill we went and down the firebreak for a while. I seemed to be huffing and puffing more going downhill than I was uphill for some reason but the legs were turning over quickly and I was feeling good.

Into the trees we went for another exhilarating descent where the name Kielder Blast started to make sense. We came out of the trees onto a track again and the course undulated for a good few minutes before turning back in the right direction. Again we were sent into the woods and an unexpected section of mud at a crazy angle. I managed to stay upright but Colin said he took a tumble here.

We came out and over the large ditch from earlier and I started to recognise the path. Into the trees again and blasting down across the roots and stumps. Onto a trail and then we were down to the bridge.  Short run across the field and then on to the finish. 7.1 miles with 1600ft of climbing.

Wow, what a race! The scenery was stunning, the route was fantastic and running against the top fell runners was superb. Watching them coming at you as they run for the English title was something else.

It would be great to get a larger TBH presence at these races. They are cheap as chips and are very friendly affairs. The Hexhamshire Hobble is a good place to start on the 2nd December.

The results can be found here –

And a video can be found here – http://www.youtube.com/watch?v=EfzKRqZuoRs&feature=plcp 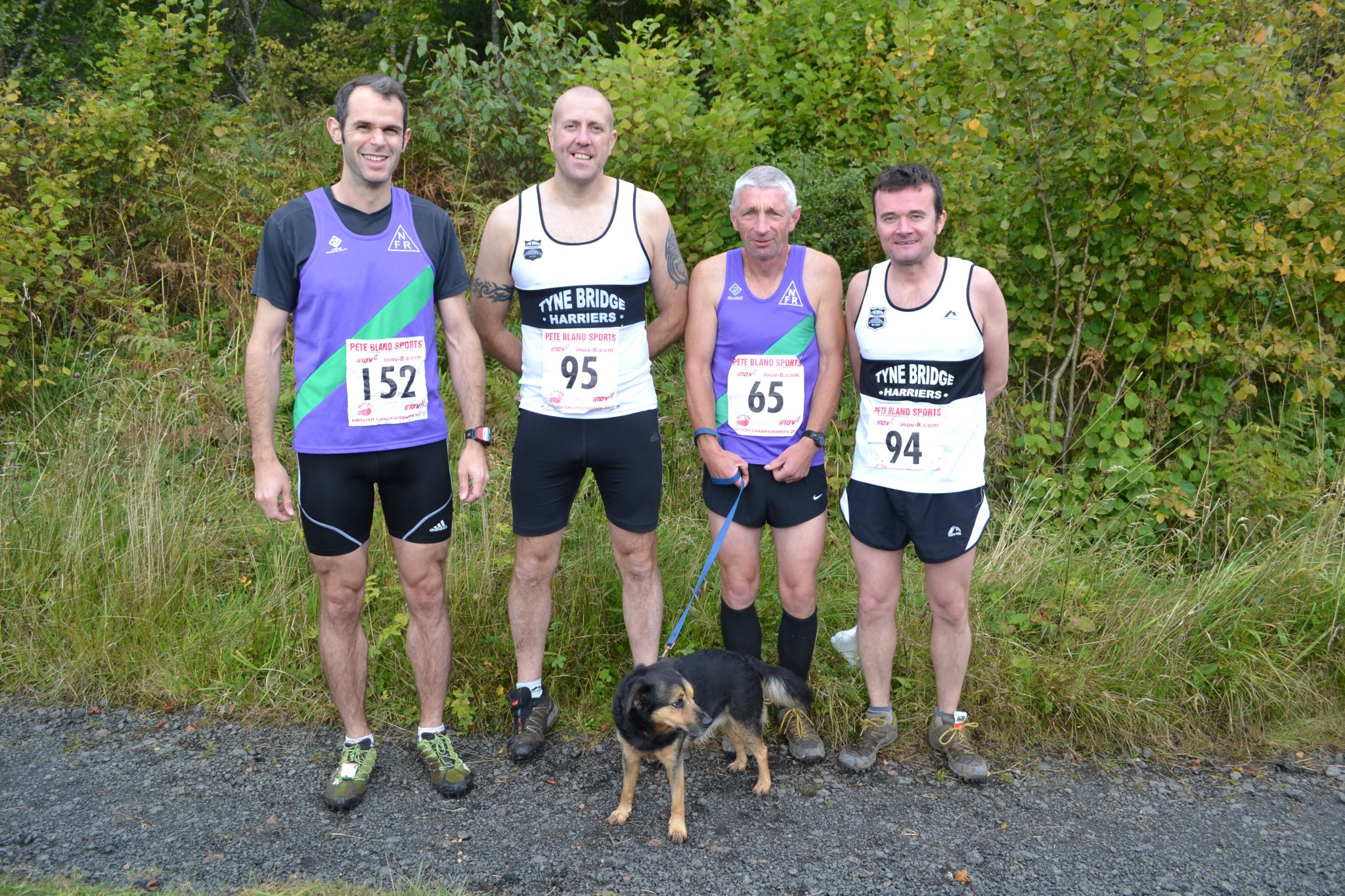 Permanent link to this article: https://www.tynebridgeharriers.com/2012/09/30/tyne-bridge-harriers-tw3/