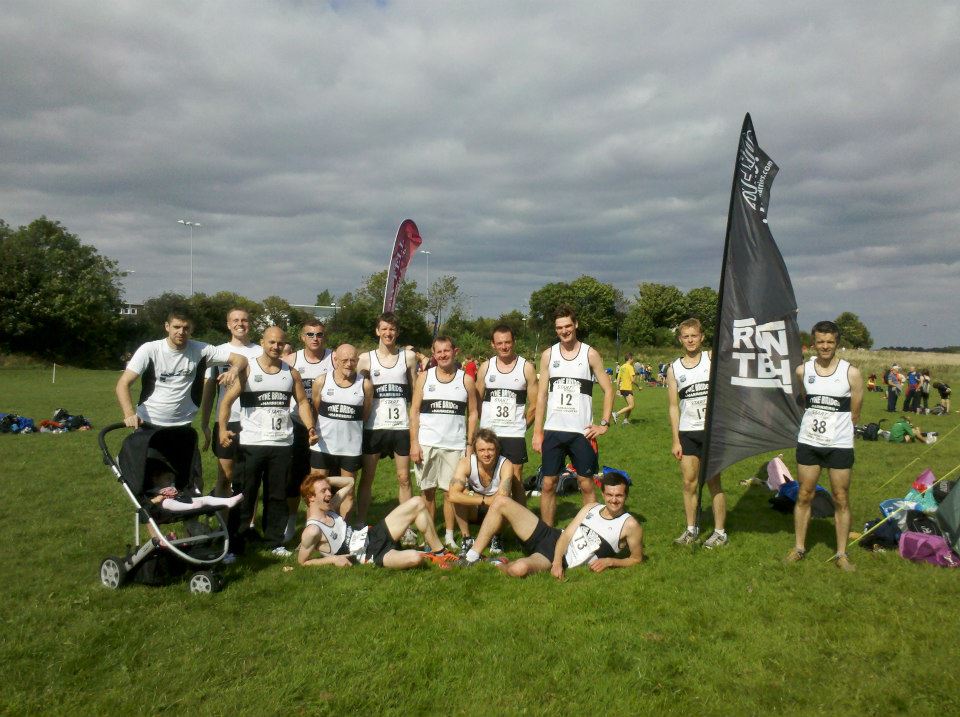 Kenny Mac writes this superb report about the first cross-country event of the season.

” Keep going, you can breathe at the end of the race.”

It is said that Cross Country first started in the early 19th Century and the first official race was held at Rugby Public School in 1837 and was called the Crick Run. I think that perhaps cross country started in the Highlands much earlier, with hairy Highlanders getting chased over moor and glen by Redcoats in the mid 1700’s.

Joking aside the first English National Cross Country Championship was held in 1876 and this unique Sport soon caught on throughout Europe and the world.

The local Cross Country Season is heralded by the historic Farringdon Relays with athletes either getting their last race in before the Great North Run, changing codes from Road to Mud for the Winter or attempting Cross Country for the very first time, as was the case for a lot of our female athletes this year.

First out of the blocks in the searing heat was Leodhais, who has not been training much and did very well to romp home in 6th position. He was tiring down the last 400 metres and signalled to his Dad ” I can’t breathe” to which his Dad replied ” Keep going you can breathe at the end of the race.”

Then it was the turn of the Tyne Bridge Seniors and Vets. Last year the Senior Men won in a accumulative time of 38.32 and the Veterans were second to Sunderland Harriers in a time of 40.33. Sparrow and Tony Carter were sole representatives from last years Senior A team and Tony had an absolute blinder, sprinting to the line in 9.05 a vast improvement of 16 secs. Sparrow who was feeling under par improved his time by 4 seconds. Supplemented by the ever improving Joe Turner and Kevin Jeffress, the A team were actually 17 seconds faster than last year. Although the team ran faster they were beaten by Sunderland Harriers Seniors into second place.

The Veteran A team had one change from last year with Keith Smith replacing Dave Moir. Keith Smith has been arguably the most improved Veteran in the North East (if not the UK) this Summer on the roads and he edged home in a very respectable time of 9.50. Next up was Mr Relays himself, Sean Kelly, who is dependable and courageous in this team event. Sean pushed himself home to a time of 10.20.

Sean then passed over to Paul Hilton, who has just returned from 2 weeks holiday and although Paul improved his time by 13 seconds from last year I believe he would have run that course 20 seconds faster before his holidays. Still a very accomplished time of 10 minutes is something that he can work on for next year.

Next up was me, and I had done the course last year just before my Scotland call up in a time 9.43 so I was over the moon to get 9.31 this year considering I had been “niggled” for the last 2 weeks and was recuperating in the Pool doing Aqua Running with Uncle Micky. The Vets team came second to a strong Elswick team but had improved our accumulative time by nearly a minute.

The other mens team were well placed with Tyne Bridge B team running out of their skins. Darryl Davison proved he is a group 1 runner and ran an exciting 10.07, he was augmented by Stephen Dixon, who had run a parkrun PB in the morning, held two core classes and then ran the Relays all in the same day. So to run a competitive cross country is amazing. Fellow team mate Mark Reynolds ran a massive 30 seconds faster than last year and Mike Norbury who had the run of his life last year brought the team into 12th position.

The Vets B team had an array of talent who had run times we mere mortals can only dream about. My Countryman, Mal Steele has ran 69 minutes for a half marathon in the past and Davie Anderson was making a name for himself with outstanding times in his late 40’s. Davie Anderson ran his leg 17 seconds faster than last year and was supported in the team by Chris Mitside and Mal Gibson in 11.06 and 11.12 respectively. Nobody has worked harder than Mal Gibson over the Winter and again Mal Gibson has run 33 minutes I believe for 10k in the past. Vets Team B finished in 9th position beating many other clubs A teams

The Veterans C team ran incomplete but it didn’t stop Steve Allerdyce and Micky giving it their all around the course and perhaps this is the most courageous run of the day giving that you know that you have not got a full team.

A very good day at the races for the lads with the Seniors and Veterans getting 2nd position. The strength in depth within the club will make next year interesting for team selection and it was amazing the support all the way around.

Next was the ladies who all ran an out-and-out race. A massive field of 58 athletes took to the field and 20% of the field was Tyne Bridge Ladies. Without doubt the bravest athletes were the ladies who have started running recently and had the self belief and determination to get their running shoes and club Vests on and put their name forward for the race. So take a bow Kate Gordon, Nicola Brady, Stephanie Mcfarlane, Emma Brannan, Lynn Cornell and Amy Jaroszjkewkz.

To see so many of our girls at the top end of the results is very humbling considering we only HAD 3 females at one point. Sophie Marr came 6th and WILL break sub 40 minutes for 10k sometime soon. Joy Fenwick came a credible 15th and we look forward to seeing her competing on the cross country season. In next position was Emma Wright, another newcomer to the club. Shortly after were Natalie Mee, another relative newbie, who declared ” I LOVE CROSS COUNTRY” afterwards, with Miss ‘reliable’ Elspeth Lawson not far behind and Megan Brette reinforcing the strength in depth of the ladies team within the club.

It deserves a paragraph to itself as the growth of the Ladies Section could not have been achieved without the stewardship of Club Captain Denise Waugh, and Denise led her troops into battle with her usual aplomb, protective and caring about her brood.

Tyne Bridge Harriers continues to grow organically and we will continue challenging, evaluating, pushing boundaries of success and looking at new ways how we can be more competitive whilst keeping the team spirit that is synonymous with our club.

So everybody, able , fit and available, get your carcasses to the next Cross Country, take a day off, make an excuse, sneak away saying you’re going shopping but bloody get there because your CLUB NEEDS YOU. 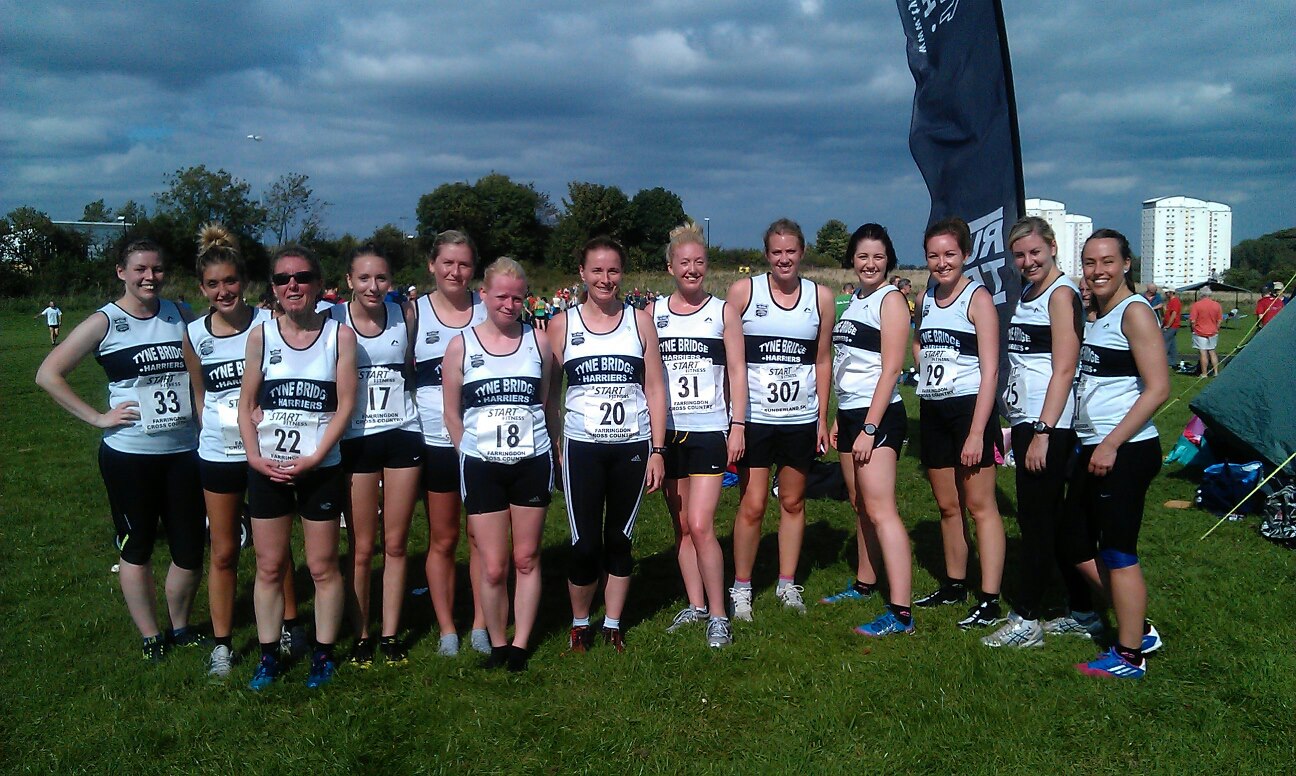 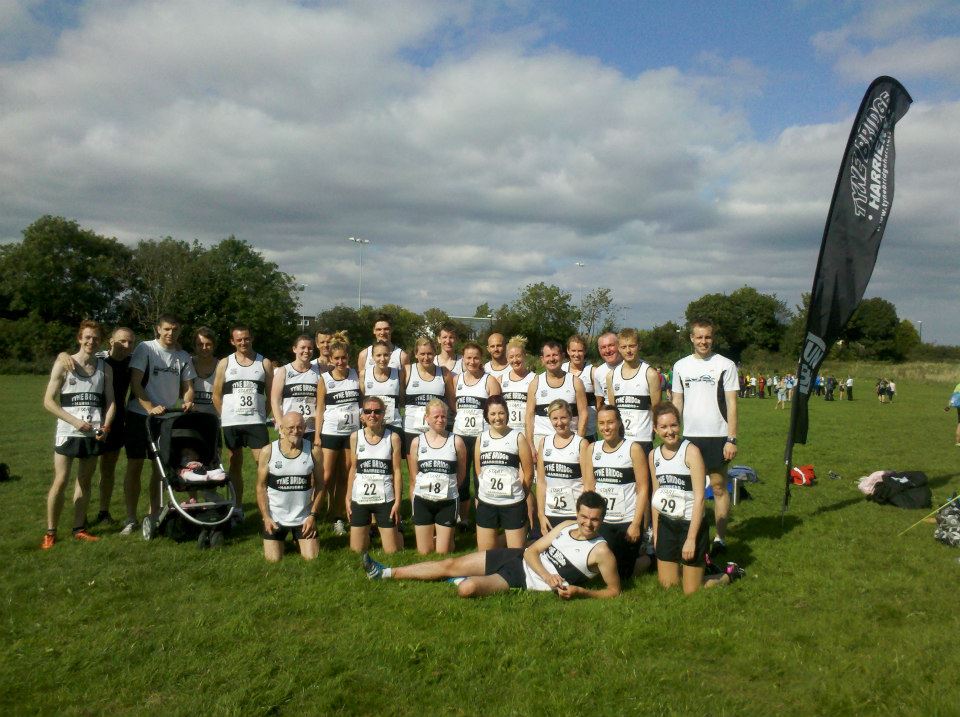 Permanent link to this article: https://www.tynebridgeharriers.com/2012/09/09/farringdon-relays-8th-september-2012/