In close and muggy conditions, Steve led from the off, finishing in a time of 33m 09s, and you can read his account of the race below. 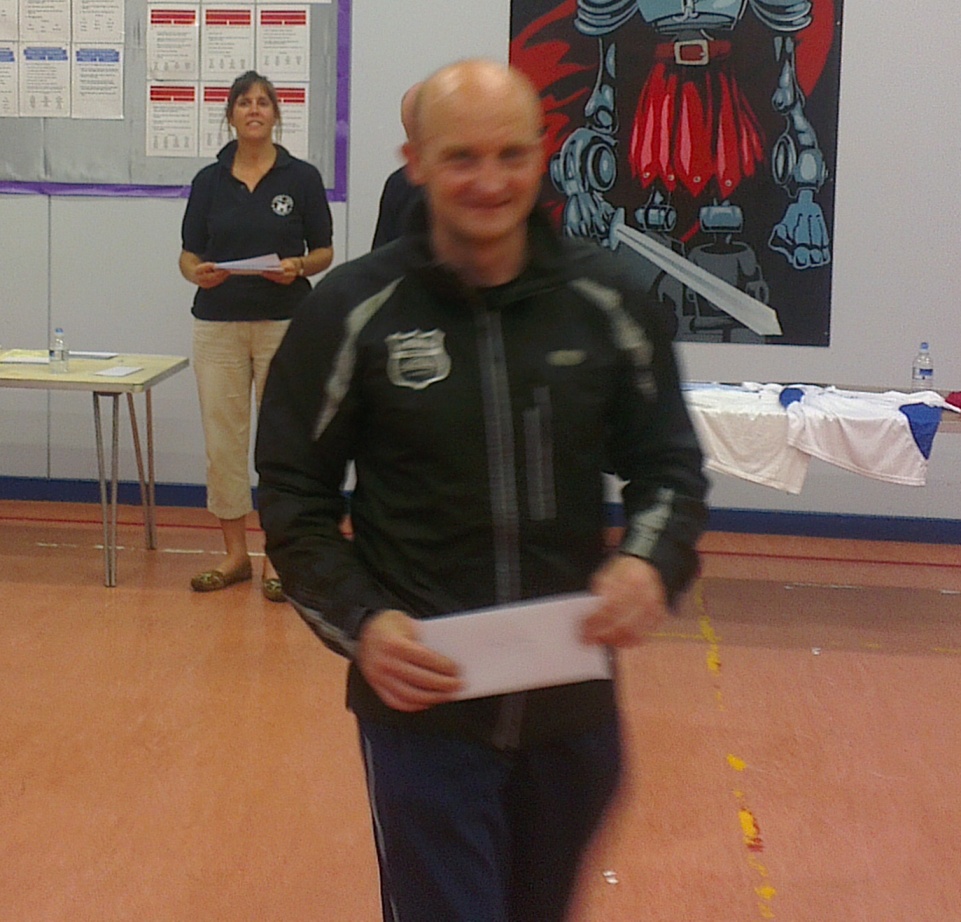 Further success came in the team awards, where thanks to the efforts of Steve, Marc Fenwick and Keith Smith, TBH won the Men’s Team prize. Individual prizes also went to Steve, for being 2nd runner at the 1st Mile marker, and Kenny Mac and Keith Smith for winning their respective Age Catergories. 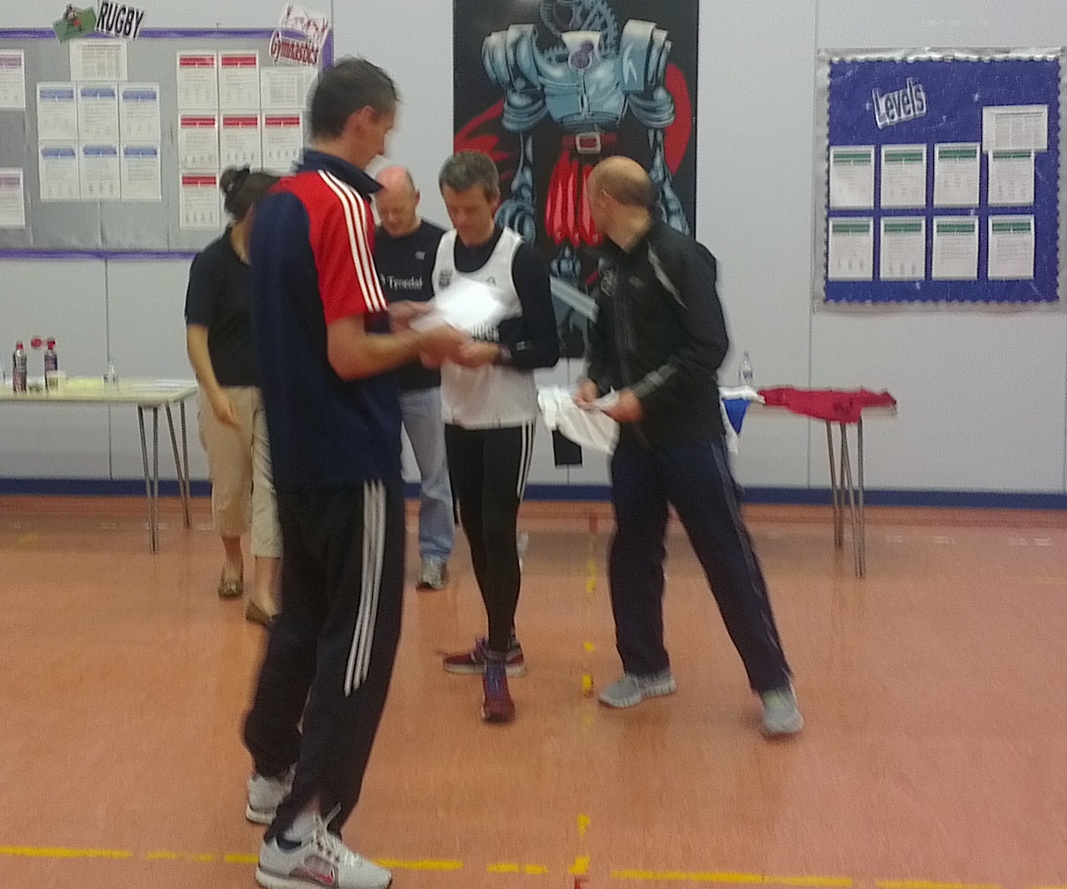 My View from the Front by Steve Cairns

I ended the Tynedale 10K race on Wednesday night with a win, but for me that win started a few weeks ago.

To explain, I have been running for a long time, and I train hard (6 days a week), but you can’t always train really hard all the time, (twice a day for some of those 6 days a week), so although I felt I had been running well, I also felt that I coasting along doing the same things week on week.

So I bought myself a new Garmin (910XT) and decided to wear it a bit more in my training to measure my distance and record my average pace, just to check to see if I had been slacking? And it said I was, so I started running a bit faster and went a bit longer over the next few weeks. This included just for fun, running the Coniston Lakes marathon on Sunday in just under 4 hrs. Along with Izzy Knox (my other ½).

So going into Wednesday I felt a bit tired but I was looking forward to the race, I got a few hours of work, picked up Izzy Knox (the long suffering girlfriend and International Ultra runner in her own right), and headed down to the Tynedale 10K.

I made it to the race with plenty of time to warm up, and with Kenny’s help and Paul’s common sense I finally got my race number and headed to the start.

I was very surprised and impressed by the popularity of this ‘’LOW KEY LOCAL RACE’’ as Paul and Kenny had described it to me: I pushed my way through the masses and lined up on the front, waiting for the gun I wished good luck to the other Tynebridge Harriers on the front line and felt comforted by their presence.  Running is an individual sport made better by a good team!!!

Off we went and I am not normally a fast starter preferring to ease into the race, but I ended up on the front as we headed past the school, I checked my pace and I felt ok, so I settled and decided not to worry about it. As we passed the school I was still in the lead, as we headed into the village I sensed a runner on my shoulder as an old friend, rival and former International Neil Wilkinson from Morpeth passed me and took the lead.

I knew there was a prime coming up and I hoped that Neil’s sudden chance of pace was that he was going for that, and not that I was slowing down? I decided not to challenge for the prime and concentrate on the race, so Neil lead through 1 mile and out of the town, with me working hard to get onto his heels as he threatened to pull away, Once I had caught him I sat on his shoulder as we hit the country roads and once I adjusted to the pace, I moved up alongside him to take my turn at the front, we ran side by side for a while, before either he dropped back or I pushed on, but again to early I unexpectedly found myself in the lead again, So nothing else for it but to keep pushing on and try to get a gap, I was loving the rolling roads and I continued to work hard, feeling comfortable on the pace I was setting.  I kept pushing on never knowing how close the chasing pack was, and never looking back. At 3 miles a spectator said I had 40 meters, I felt it was not enough, and kept pushing my pace, being at the front allowed me to cruise up the hills and push hard off the top and on the flat. I feel this is the best way to extend a gap as the runners behind always look up at the top of a hill and will feel demoralised if they see you have opened the gap when they are at their lowest.   Through 4 miles and I still felt good, but it was starting to hurt, but I was telling myself no one was going to beat me now.  Through 5 miles and I was starting to relax, through 6 miles and I was looking for the finish, there it was, and I had won!!!!  I could now look around and saw I had a 40 sec gap at the end, which pleased me and I felt was a nice reward for the harder training.

I saw the rest of my Tynebridge Harriers coming home and I knew we had the team prize:  Job down by both my now not so new teammates and me.

Thanks to all who stayed for the prize giving, it meant a lot to me.

Finally, many thanks to Paul Hilton and Dave Kitching for the photographs 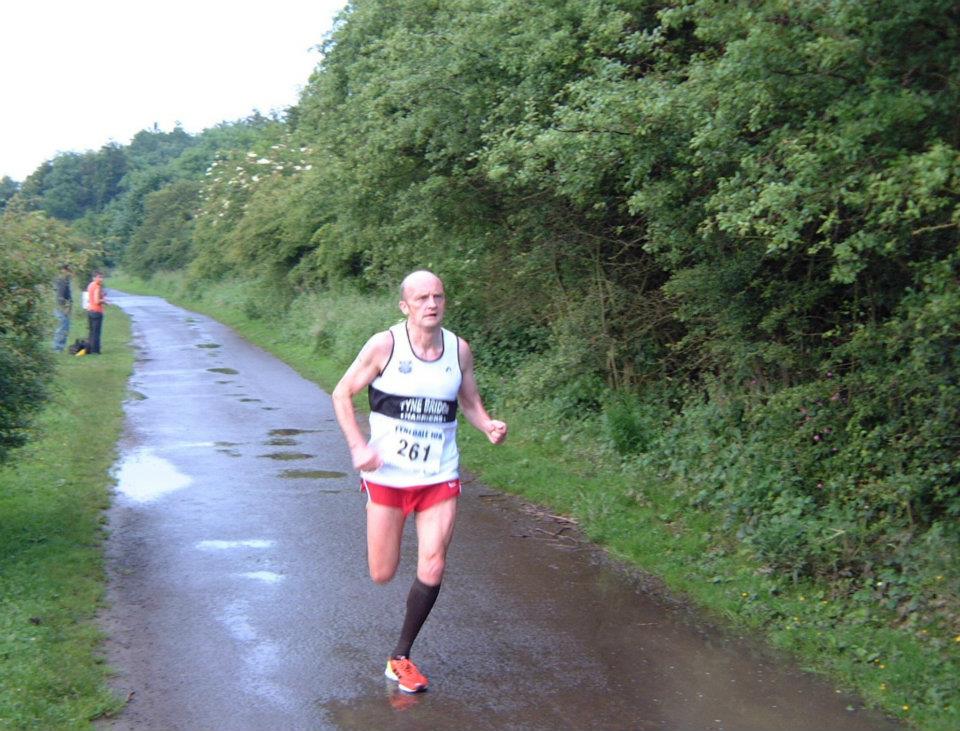 Steve Cairns on his way to victory. 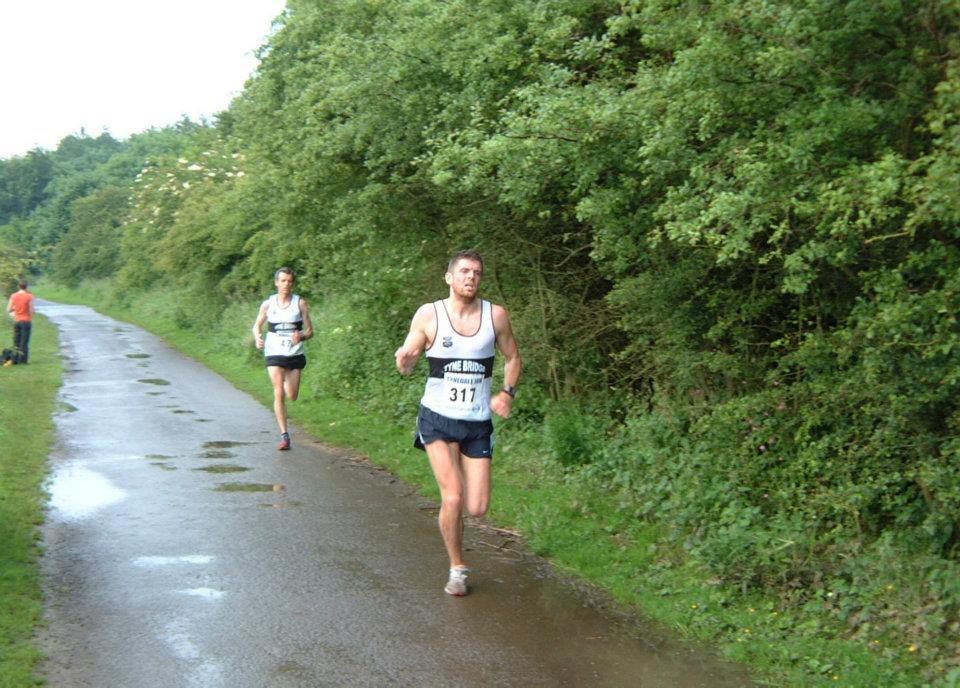 Marc Fenwick ahead of Keith Smith. 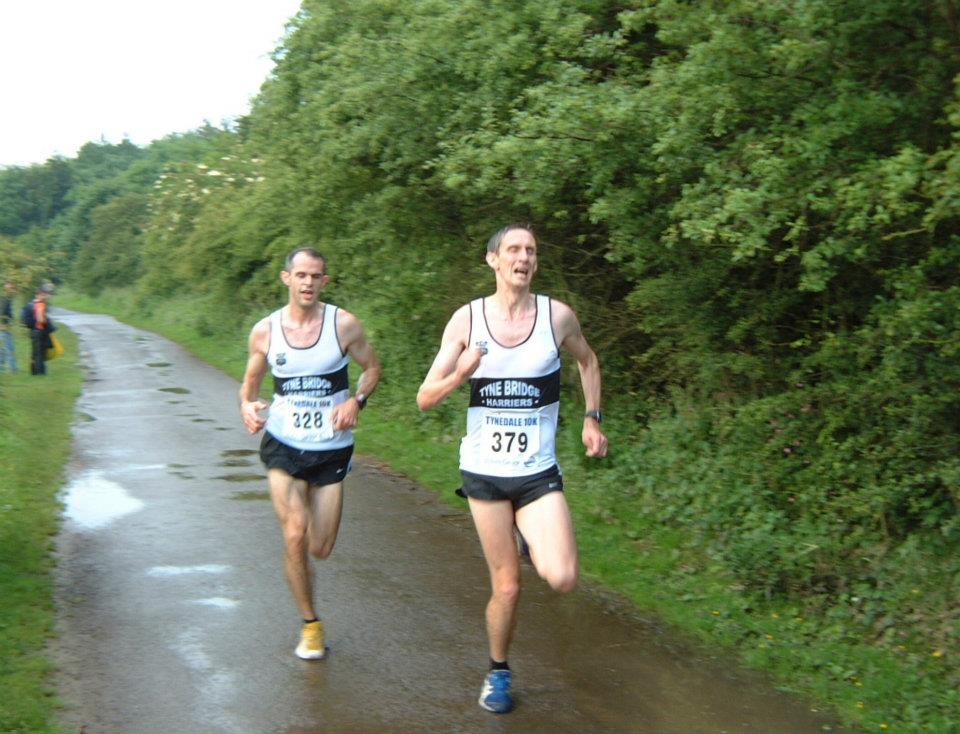 Brother Louis and Kenny having a ding-dong near the finish. 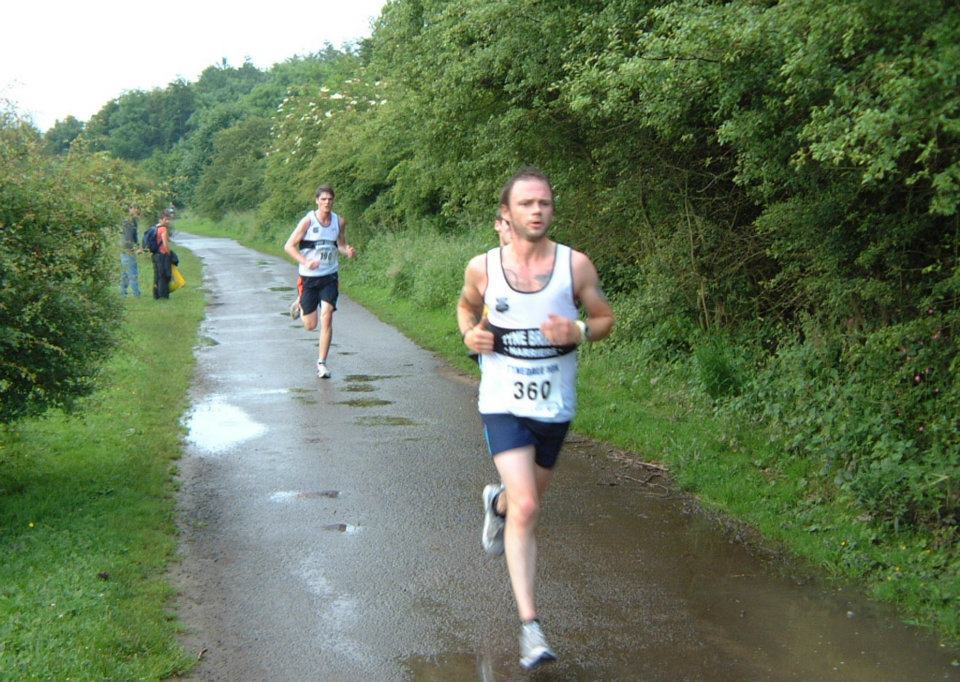 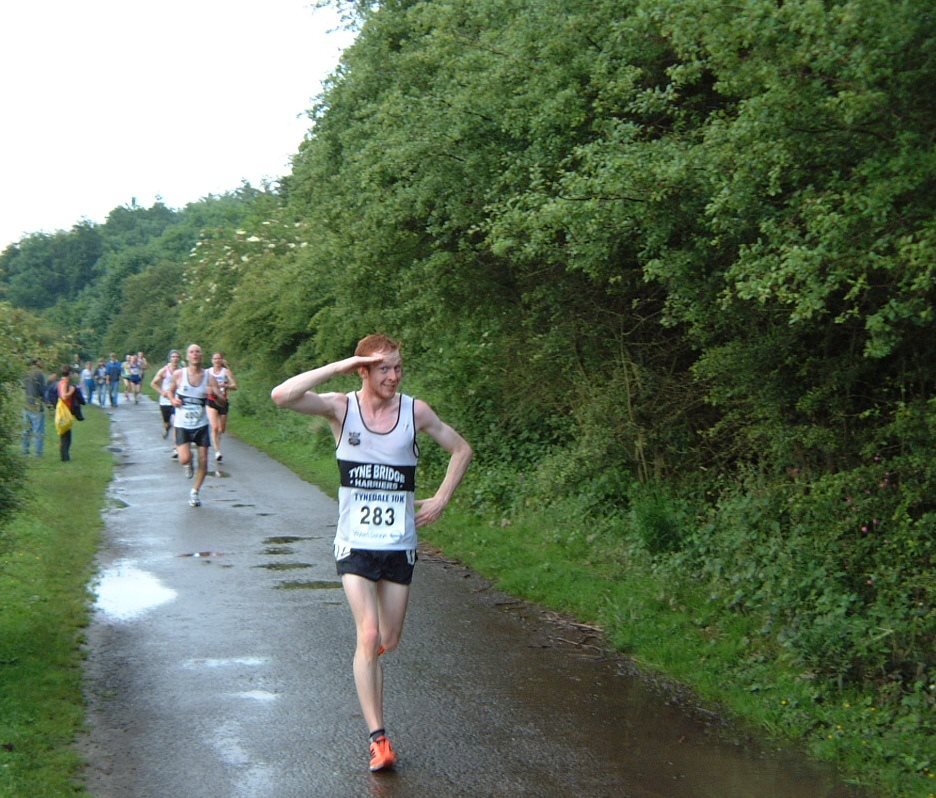 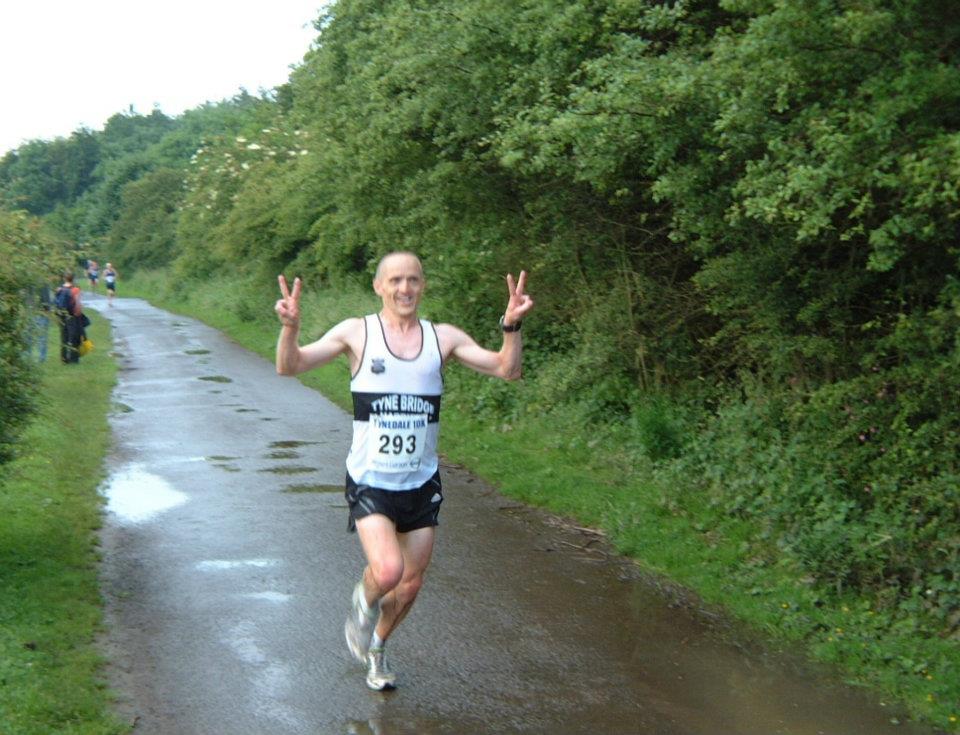