It was congratulations all round as the old fogies from Tyne Bridge won medals galore in this year’s event.

Dave Moir sends in this report.

I set off on leg 1 with Keith (I’m didn’t put an entry in for Blaydon) Smith who put on a massive initial burst to lead the field round the first leg. We had Lucy Matheson on leg 1 for the ladies and Dave Anderson for the V55 mens team who both put in good solid performances to leave their team mates in good positions for the next leg.

Keith handed over to David Appleby and Apples had one of the least enviable of jobs of the evening, that being to minimise the damage that Sunderland’s V45 team member Brian Rushworth could do to us. Brian went past Apples just before the second lap and he took a bit more ground out of him on the second lap, I handed over to Sean Kelly who despite having run Edinburgh Marathon a week and a half ago, put in a fantastic second leg leaving DD with a reasonable position to work with. Dave Anderson handed over to Big Ron and Lucy to Jane Lowes.

The ladies race finished much earlier as they ran one lap each, and it was great to see Kerry Reed bring the girls home in first position. Brilliant effort all round from the ladies who also provided my favourite quote of the night of “but I never win anything”. Let’s hope TBH has reversed that situation, and this Gold medal will be the first of many.

On the final leg Apples, after keeping in contact with the Sunderland team, handed over to Dave Embleton who gave it everything to retain the overall 2nd position for the V45 team. DD also gave it all he had pulling our V35-45 team into 3rd overall, then Graham King brought the V55 team home having a bit of a battle with a Low Fell lad in the home straight.

The final results (unconfirmed at this point in time) is as follows :-

‘Getting On a Bit’ Gadgies V45-54 – 2nd overall – second in the age category to take the silver medals.

Owld Gadgies V55-64 – third in the age category to take the bronze medals.

As with all these events, TBH runners had terrific support from fellow club members, so many thanks to Denise, Mickey Duff and Marc Fenwick.

And thanks also, to all the officials and volunteers who helped put on a great event. 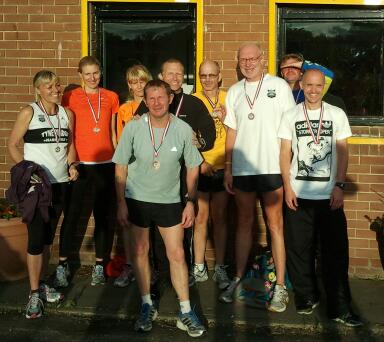 Permanent link to this article: https://www.tynebridgeharriers.com/2012/06/06/north-east-masters-road-relays-2012/